Riding the cap VS riding the guard/comb

I am noticing a lot of debates revolving around riding the cap or riding the guard of a DE razor. I get what does it mean, I know how to do it. What I don't get is if this is another YMMW thing?
I've read reports that people rode the guard and that made razor more tame. Other say they tame it with riding the cap.

What is it all about then? YMMW? Model of a razor? Depens on the moon cycle?

Waxing I ride cap.
Waning I ride guard.
Any other way is wrong!

Honestly I don’t see an debate here. To each their own.
I guess I use the guard more but I will often finish my strokes by using the cap soooo yeah.

Especially to a guy who tends a ‘neutral’ angle which makes my shaves more comfortable!!

Contributor
Most razors I use prefer the neutral angle. The exception is the R41 which I use very steep. But there are guys who use it shallow. It’s all very much personal preference. Best to find what works best for you through experimenting!

Contributor
Ambassador
Some razors, like the Fatip/Joris/Schöne razors, give you the flexibility of using either a shallow (cap) or steep (bar/comb) angle.

Other razors, like the Gillette Techs, work best with a shallow (cap) angle.

Some prefer a steep angle and others a neutral angle.

It takes some experience and experimentation to find what works best for a particular razor on YOUR face.

Depends on the razor, and the person.

Many razors are designed for an angle in between those extremes, around 30 degrees. The neutral angle generally gives the most blade exposure. Moving away from the neutral angle can help reduce blade exposure and tame the razor down a bit. Riding the cap gives a shallower angle of blade to skin, for many people this feels smoother, taken to extremes the razor does not remove enough hair. Riding the bar works well for some people, others get the feeling with a steeper angle they are scraping the skin, leading to more irritation.

I've read through the responses and I agree with them all, meaning the best angle largely is a YMMV experience. Personally, I'm becoming more of a "ride the cap" guy.

Experiment. There is no one answer for everyone. Some DE razors excel with a higher handle angle, while others are seem superior with a lowered handle angle.

The secrets of a close and comfortable shave continue to be good prep, a hand-friendly razor with a sharp blade, along with the best pressure and angle for you. And don't forget the after shave lotion that restores softness to the skin!

And now if you'll excuse me, it's time for my morning shave, which today will be slightly riding the cap with my 1946-47 Gillette Aristocrat razor, loaded with a German-made Wilkinson Sword blade, and followed with a little Mennen Afta skin conditioner. The day is off to a good start!
R

It is definitely a YMMV thing. I have a coarse beard and sensitive skin. If I ride the guard, the blade tends to scrape off skin cells leading to irritation. A more shallow blade angle does a better job of cutting my coarse beard without abrading skin cells. Thus, I either ride the cap or use a more neutral position. However, I have read reports from others who believe riding the guard works better for them. Thus, you just have to try it both ways and see what works best for you. You may find that different razors work better one way or the other. You may also find that you need to adjust the angle with each pass, depending upon grain direction.

Hmmm, some will argue that riding the guard allows the skin to roll the hair follicle to the top allowing the blade to easily slice at the proper angle...... YMMV

I mostly ride the cap WTG & ride the bar ATG.

Contributor
i used a Famex caged comb razor for the first time today. I ended up riding the guard because it was just too aggressive otherwise.

samhain666 said:
What is it all about then? YMMW? Model of a razor? Depens on the moon cycle?
Click to expand...

For me it makes the most difference shaving my two swirl growth patterns. 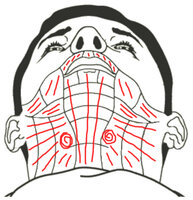 With my Fatip Grande, which is a very rigid design, if I shave over my swirls with a steep angle I'll have weepers. When I shaved over them with a Gillette NEW LC, the razor skipped right over them. When I increased pressure to keep the razor in contact with my skin, because the blade lacked support, the blade itself flexed and skipped right over them. When I added a shim to that razor it helped about 50%.

As blade exposure increases, or baseplate support decreases with DE blades, that becomes more pronounced. I've been going over this very thing on the last page of my journal.

Using my GEM razors, with GEM PTFE blades that are more than twice as thick as DE blades and much more inherently rigid, the angle I shave over the same areas matters much less. I can shave over my swirls even extremely steep and because the GEM blade doesnt flex during my shave, I have no weepers.

When it comes to shave angle, shave with the angle that gives the most comfort. Whether that be either extremely steep, extremely shallow or anywhere between the two. The top priority is comfort.

Even if I wanted to do it on purpose...I find it hard to believe I can ride the cap/bar/neutral the entire shave! I can’t measure the angle of the razor every single inch of my skin, so I don't care about riding anything, I just put the razor against my skin and let my muscle memory do the rest.

I made a decision to ride the cap more starting a few months ago ( RR SLOC, Gillette Slim, and Gillette Old mostly ). At least to my thinking it resulted in a smoother shave experience with those three razors at least. Not that they weren't smooth before, but there was a slight perceived benefit at least in my mind.

@ngel said:
Even if I wanted to do it on purpose...I find it hard to believe I can ride the cap/bar/neutral the entire shave! I can’t measure the angle of the razor every single inch of my skin, so I don't care about riding anything, I just put the razor against my skin and let my muscle memory do the rest.
Click to expand...

Some razors provide more feeling of the blade on the skin than others. Getting the angle is more of a sensation of touch than a visual sensation where you measure the angle with an imaginary protractor.

So, muscle memory is a big part of it.

Is it strange I like the feeling of more blade exposure on my neck?
If so ahhh never mind.
B

I started out using a vander hagen packaged wieshi razor. I rode the bar as that was the only way it would actually shave MOST of the time..

Later on I got a travel tech, HAD to ride the cap. Then I branched out into full size techs and ttos, just ended up riding the cap I guess.

HOWEVER ALL patents pre 1940 seem to show that the razor was SUPPOSED to be used with BOTH the cap, the safety bar, AND the blade edge touching the face at one time. Tried with a fat boy set on 5, last time I tried that patent trick.

It is truly a YMMV. You will find razors that perform better for you if you use a more neutral angle, ride the bar, or ride the cap. That’s part of the fun of this hobby... finding what you like best with each of your razors.