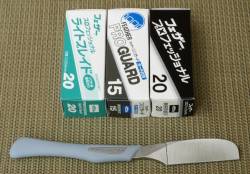 Over many years of straight razor shaving I have found use for disposable blade straights, both as travel razors, and fill ins before I took up honing. With many western style folding straights in my collection I decided to venture out into a non folder. I did so with trepidation as I couldn't envision success given how I use my folding straights.

I decided to try a Feather Artist Club DX. The review I read on Badger and Blade was not encouraging but when I was able to see one in person, at Menessentials, in Toronto, I thought it cleverly made and of apparent high quality.

The packaging, storage case, and general appearance of the razor has been well covered in other reviews. What I found lacking was information and photos of what makes this beast tick. Accordingly I have posted photos of the razor in various states, with and without blades. If you have not handled one of these fine pieces I hope you will be able to better appreciate the fine finish and fitting that goes into building one. It is as precise in design and fitting as the superb blades it holds.

The razor is designed so that the nose, which has a female fitting in it, engages a male fitting on the Feather blade package (15 or 20 in a pack), and you gently squeeze the top of the razor while sliding a blade out of the package into the razors slot. You never have to handle the blade to load it. The handle is simply held blade side up and gravity causes the blade to fall precisely into proper location. You have to see the operation to understand how slick, safe, and convenient this is. Gone are the days of breaking DE blades in half.

I tested my new razor with the blue box Feather Professional Lights first. After five shaves the blade remained shave sharp. I found these blades gave BBS shaves easily but with my style, they were unforgiving. They protrude from the holder by .6 mm and are thin at .254 mm. I found my blade angle tended to be too shallow and the razor itself would drag on my skin. I suffered more nicks and weepers than normal, by a sizeable margin. As I got acclimatized to the razor it got much better. I would recommend shying away from the Lights until comfortable using the Feather.

The razor sides suffer from stiction when they contact your skin. It is not as slippery as a standard straight.

Next I moved on to the black box Feather Professional black blades. They protrude more at 1.2 mm. This eliminated my angle and resulting stiction issue and I found the shaves as close as the Lights but less damaging. Again after five shaves the blade was still ready to go. This will probably be my go to blade. Performs well and is the least expensive. (I have not had access to the Professional Super which protrudes further and is thicker)

Finally I tried the grey box Pro Guard blades. They are the most expensive and unusual blade available. They protrude 1.2 mm and are .35 mm thick because of the guards. In use they are a most unusual blade. You are very aware of the feel of the guard but they are not unpleasant or distracting. They still allow as close of shave as the other blades but are more forgiving. They are a good blade if you are having an off day, are rushed, or maybe had too much coffee. Blade life matches the others.

Originally I had no intention of trying these blades. I am glad I did. The experience really helped me understand the totality of what Feather has achieved with their disposable blade straight system. This blade, in my opinion, is the closest to the overall real straight feel. The other blades require too light of touch and finesse.

I was so impressed with the ease of disassembly, cleaning, and reassembly of the razor that I decided to strip it after each use. I stored it as I do my folding straights but removed the blade. The blade was stored in a small plastic container. Every bit as good and easy to use for travel as a folder.

The non folding handle was a concern when I bought this razor. The way I hold and manoeuvre my folders is such that I felt the handle would always be in my way. My expectation was I would be selling the razor shortly after trying it. I was completely wrong. The handle is perfectly designed for ease of use. The contours are exactly where they need to be to give a comfortable, balanced, secure grip. The handle material allows a light yet secure grip with wet hands. Best ergonomics of any razor I have used, period.

I love ivory, horn, and wood scales but this razor would be a lesser piece if so equipped. It puts function ahead of appearance. The non folder handle design does not lend itself to slippery materials. If you need looks rather than function, the folder is the way to go.

When evaluating this razor I used the same supplies and approach to my daily shave as I do with my regular straights. Simpson brushes and various soaps and creams, with an emphasis on Boellis, and later Floris.

The Feather is a performer and I can see this as an excellent alternative for someone not wanting the full straight experience. For a dedicated straight user it is also a good choice for travel or just something different.

Pros: Shaving heaven
Cons: Expensive
I started with DEs and migrated to traditional straights and still use them occasionally. I enjoy the shave but not the honing and stropping. I read good things about the Feather disposable straight blades and decided to give them a try.

My first go was with the inexpensive Korean made CJB non-folder. It is a copy of the no longer made Feather RG. Great shave but poor quality blade holder. My next was a pair of Feather SS, both the folder and non-folder. I loved them both but preferred the non-folder for easy navigation around the face. I used them almost exclusively for a couple of years.

After reading about the better weight, balance and blade exposure of the more expensive Feather DX, I decided to give one a try a couple of months ago. I bought the folding DX with the teak scales. After about 40 shaves, I'm sold. I have the best of all worlds:
- smooth as silk shaves in 1 pass with occasional touch ups
- maintenance-free stainless steel razor and sealed scales
- use-and-toss blades for consistent sharpness and smoothness
- the pleasure of holding a work of art!

I still use the SS non-folder occasionally, but for me, the DX is the way to go.

Pros: well made, fun to use, good grip, easy to replace blades, blade choices
Cons: pricey, can be unforgiving
u2u did a fine write up; not that much to add.

The Japanese style provides a nice different shaving experience for those interested in something new. As with most Feather products, the quality is there, but they are quite pricey.

I have both versions and use the non-folder somewhat more. I love the fact that you can change blades for a totally different shave, while using the same handle. This versatility is to me the best feature of these razors. My favorite blades are the Kai Pink Mild and the Feather Pro and Super Pro. When you replace a blade with another type it is as if you get a whole different razor.

Yes, saving the time on stropping and touch ups and an occasional re-hone is a benefit, but not really that much for those experienced with straights.

Overall, I do recommend this razor as a nice change for those who want to try a new approach. If this razor was to be the sole straight razor one was to own, I would say consider the folder as the place to start.