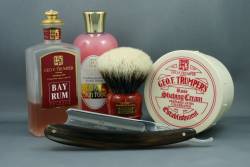 Several months ago I decided to expand my accumulation of straights from five to fourteen, give or take. After much searching on the forums I thought four or five Wackers could find a place in my rotation. I set out to buy a blonde horn &quot;Gadsden&quot; 15/16 notch point for an initial evaluation of both a vendor and the Wacker product. I wanted the blade factory fresh. If it were not shave ready I would address the matter with my Shaptons.

In due course I received a dark horn specimen that had been honed, post production, and poorly at that. It was no where near shave ready with the heel and toe crudely done extending the bevel well beyond the norm. The face of the blade had horizontal scratches through the lower section of the etched artwork. There was a gouge in the scale near the pivot pin. My initial follow up with the vendor was unsatisfactory and as it was an international purchase I took the matter as an online learning experience.

I honed the blade and finished it with one and then .25 micron diamond pastes. This made it very shave ready and covered the crude work on the heel and toe. The Wacker is now an excellent shaver that is pleasant to use but this was an expensive razor that I expected would have a level of workmanship and materials commensurate with the price. It fell well short of expectations.

Sold as 15/16th but is actually 7/8.
Blade is not ground perpendicular to the spine, it is canted by several degrees.
Grind marks on the tang that ought to have been polished out, although it appears they may have tried as the tang is not symmetrical.
The pivot pin is poorly installed and peened with a gouge in the scale beside the head side of the pin.
The wedge pin is poorly installed with the peened end being crudely filed off.
Scales are visibly misaligned to the extent that, if set down with the spine up, the razor falls onto its back more often than not.

Pros: Once honed an outstanding performer
Cons: Overall poor quality of workmanship
As above.
It does shave well once you touch it up but the price is very high relative to the quality of workmanship. Much better overall values to be found elsewhere. If it didn't shave so well, and the loss so high if sold, it would be gone.