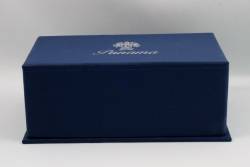 Last week I attended Menessentials, on Danforth, in Toronto, to address an imbalance in my razor/creams ratio. I purchased two Dovo straight razors, a Mammut and a Flowing, establishing a one to one ratio. With my spouse in tow I didn't really want to leave without surreptitiously re-establishing the imbalance but I had no idea what soap or cream to seek out. The enablers on B&amp;B gave me some acquisition management strategies...

Seth, the Managing Director of Menessentials, unaware of my dilemma, brought out a bowl and brick of Boellis Panama 1924. He had a small stash in the back of the shop! Beautifully packaged, high quality in appearance, and delicious in almond scent. It had been sometime since almond was my mainstay but this looked like a winner. I departed with a 250 gram brick of Panama 1924 in hand. So stimulating was the scent that we stopped at a bakery for a half dozen fresh baked almond croissants.

On arriving home I hit the net and googled Boellis soaps. It appears the formula for 1924 may have varied over the years. An earlier, 2009 review on B&amp;B shows an ingredient list without tallow. This one has tallow as the fourth ingredient. With only the thin cellophane wrapper it weighed 253 grams so it was fully as described on the package. I sliced off a fifth and molded it into a wooden shave bowl. It had the consistency of adult play dough.

Next morning I put it to the test using a new never stropped Dovo Mammut straight, &quot;The Hive&quot; Manchurian brush, and no pre-shave to confound my results. A few swirls of the brush on the soap, a touch of water from my quaich, then face lathering to build the lather. The soap lathered well with little effort. I prefer a thick lather for use with a straight and it would be a little too thick for other than an open comb DE. I achieved this level of lather consistency without issue. The quantity of lather was enough for three passes although my norm is one WTG and one ATG. The scent was a touch sweet but very pleasant, readily apparent yet not strong. I worked the lather longer than normal taking in the pleasurable experience.

On shaving the lather was slick and protective yet allowed the blade to pass effortlessly. A very close and comfortable first pass was achieved. On rinsing the blade the lather came off quickly and completely. With some soaps I find residue builds on the blade due to the firmness of lather I prefer. I rinsed my face and re-lathered for the second pass. The ATG pass was again comfortable and I didn't need any touch ups. The second pass felt smoother than normal leading me to believe the first pass was a closer shave than I usually achieve. BBS when done.

The following day I tried Panama 1924 again. This time I used a new never stropped Dovo Flowing straight, an M7 Manchurian, and enough water to thin the lather to the point it would work well with a closed comb DE. Once again I shaved one WTG pass and one ATG pass. The straight and soap combination were excellent with another fine shaving experience.

The Panama 1924 performed so well, so easily, and was so pleasurable that it served as a powerful reminder as to why I took up wet shaving. Shaving with the right razor and products is a pleasurable experience to be looked forward to rather than a chore. Had I started with such an excellent soap I don't know if I would have moved on to others.

Panama 1924 is expensive at first glance but when one considers the weight and density of the product, on a cost per shave basis, it is probably on par with creams from GFT, DRH, or T&amp;H, depending on your local market.

I likely would not have considered this product as an online purchase as the quantity and cost are above my online comfort level. I thank Seth for bringing it to my attention as it is a top performing product that will have a permanent place in my rotation. The Panama 1924 also made the christening of two new straights a more memorable experience.

If you have considered this soap or want to be a little adventurous it is a good value and I highly recommend you give it a try. If buying a brick it is perfect for sampling or sharing. A most unusual product.