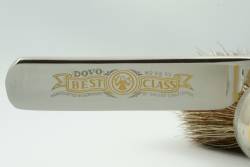 Sometimes reading reviews and searching the net for razor images misleads one into passing over true gems. I had been at Menessentials, on Danforth, in Toronto looking for a new straight. Seth, the Directing Manager, told me about a Dovo Desert Ironwood he had. Having seen a negative review on B&amp;B by Joel I didn't give the Ironwood consideration opting for a Bergischer Lowe instead. Since then, my enabling wife returned to Menessentials to look at another razor. She also checked out the Ironwood. She purchased it on the spot.

When I received the Ironwood I was immediately struck by the rugged beauty of the hand finish and raised veins of the very dense hard wood. The pivot ends of the scales are dark and the majority of the burly wood is an iridescent, holographic like, rust color true to the Ironwood moniker. Moving the razor around under a light source produces a lovely light show as sections of the grain are illuminated and fade in turn.

Dovo has lined the inner side of each scale with the same material used on their Mammut Siberian Wooly Mammoth scales. The wedge is polished silver metal and the razor is assembled with their standard pins. Overall the materials, fit, and finish are superb.

The blade is a Best Class #95 in stainless steel. It is a long standing item in the Dovo line and is a smooth shaver that holds an edge well. I have an old version in Snakewood. The new blade is nicely laser etched and gold washed. All the markings are clean and well aligned. The finish on the blade is uniform in application. Dovo has improved their finishes and markings over the years.

The gold wash is applied with a particularly high degree of precision and is a marked change from even their best of the past. Thiers Issard would do well to pay attention to the competition in this area.

The razor weighs 54 grams or about the same as their current 6/8 models Flowing and Encina, and is 12 grams heavier than the Snakewood version with the same #95 blade. The scales are slightly oversize.

I tried the razor out with Boellis Panama 1924 shave soap and received a pleasant, smooth, near BBS result.

The edge was untouched straight out of the box. No need for honing prior to use. The scales pivot smoothly with just the right amount of friction. The blade is perfectly centered as it enters the scales on closing.

It is not accidental that banner adds on B&amp;B from Fendrihan often feature the Dovo Desert Ironwood.

If you are seeking a good looking solid performing razor with a modern low maintenance blade the Desert Ironwood should be on your short list.

Pros: Beautiful wood ages well.
Cons: none
I've been using one of these for several years now. I think I got it about 6 years ago, but I may be off a year in either direction. I think I paid about $200, but I'm not sure. That old price is pretty irrelevant now. I usually shave with it on weekdays, while on weekends and other off-time I use an old antique 7-day set of carbon steel blades.

The carbon steel blades in my old antique set are slightly sharper than the stainless Dovo, but the difference is so small that it really doesn't matter much to me.

The main attraction of this razor is the beautiful ironwood handle. It has aged well with years of use. I've paired it with a custom cocobolo brush a local woodturner made for me. Both woods age gracefully, with little to no care or attention.