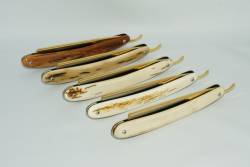 I have a modest collection of users acquired since the mid-late nineties. My original three razors are Dovos and recently after a negative foray with Wacker, mixed results with several TIs, and two very good experiences with Dovo, I purchased a Mammut. I did so with some reservation due to the generally negative view of Dovo on this board, and the Mammut review by Joel.

The razor arrived sealed in the same well made black wood case used since release of this model. Nice for presentation or storage but as this razor will be a user the box is superfluous.

Purchasing a sealed mammoth ivory item is like entering a lottery except you are guaranteed a prize, it just might not be entirely to your liking. I have a Wacker and a TI, purchased on line, that I would have rejected if an in store purchase. The Mammut was ordered in to a store giving some added certainty of satisfaction.

This Mammut reveals a rich level of infused minerals with light through reddish to dark browns and very deep blue to black. Fissures in the scales reveal the orientation of the material when in the ground. The scales have been polished and sealed. They are well matched and the fit of the hex head flush pins is excellent. The scales are true and the blade closes dead on centre. The pivot pin is adjusted so that the blade moves smoothly between two washers and remains in the orientation desired. A perfect functional fit and with the gold spine and tang a visually pleasing package.

The initial feel of the razor is fairly hefty, at 69 grams, due to the ivory's density. The heft with the obvious solid construction gives a feeling of confidence. The third, hidden, pin is well placed contacting the rear of the stabilized just above the tang. When closed the third pin and pivot are the only contact points for the blade.

The gold wash on the spine and tang appears thicker than on my older Dovo razors. The satin finish on the blade is subtle and perfectly uniform to the naked eye. The blade marking are different than any of the posted photos I have seen including some from a member who purchased his Mammut, new, earlier this year. On the front of the tang all markings are laser etched. The back of the tang is unmarked. This deviates from examples with stampings on front and rear or a laser front and stamped rear. The mammoth figure and name Mammut are deeply lasered into the blade.

Some who own or have considered a Mammut are displeased with the satin finish for such a high cost razor. I feel the satin is a good finish as this razor is a user and I find satin helps retain an oil film thereby reducing potential staining while also minimizing the character marks use brings. It also emphasizes the scales are the visual centre of the Mammut, not the blade.

The bevel on this blade appears well set with good workmanship around the heel and toe. Out of the box it looks shave ready and in practice it is. The out of the box edge on this Mammut is second only to two Harts I have.

At 69 grams, with most of it in the scales, it is scale heavy. I usually keep the scales at 90 degrees to the blade. Simply moving the angle slightly forward shifts the balance such that the scale weight, to me, is a non issue. My straights range from 38 to 88 grams in weight and with different scales and grinds this seems a natural approach. My 7/8 Hart, at 88 grams is way scale light, so I do the opposite.

While I am very pleased with the overall fit, finish, and shaving performance of this Mammut, it does have issues. As with all my Dovo razors the spine edges as you approach the stabilizer area could use more attention. This is easily resolved on first honing but a purchaser shouldn't have to correct this. This is most pronounced on the front. On the rear, the grinder tried to address it but went too far, cutting into the gold on the stabilizer. As this razor will be in regular use normal wear and tear will negate these flaws. They would be significant for a collector wanting a safe queen.

The Dovo Mammut is not inexpensive. Some members have easy access to custom makers and could get more perceived value going that route. For those who don't have custom makers in country, but really want an ivory based piece, and have concerns about moving ivory across international borders, a locally purchased Dovo Mammut provides a good option.

I have attached a few photos which were taken after several days of use.