what, no Agera r?

btw, that would be my dream car. (seeing as i still don't own a car

We kept a 1969 Chrysler from 1976 when my wife and I dated to a few years back. It was photographed for a series of collectible car publications and still shows up in coffee table books from time to time. Here's one from the set. I was eating a sandwich behind the photographer when this shot was taken.

A gloriously huge and heavy car that handled like a dream, it would also get out of its own way. Equipped with the 440 V8, "TNT" option rated at 375 hp, the engine was claimed to be conservatively rated. It would scat off the line or at highway speeds when the secondaries on the Carter AVS 4-barrel were opened up. Couldn't pass too many gas stations with that engine and a 5200 lb. curb weight.

An informal photo taken at a roadside park when the boys were young.

My 1964 Chevy C10 stepside longbed named "Charlotte". She's far from done but I gave up my second favorite car (2003 Subaru WRX named "Buttercup") to make her my daily driver in non-motorcycle weather. I can't be in this truck enough.

My two favorites happen to be my first car and my last used car.
First: 1967 Olds Cutlass ragtop, back in the day when one could pick up a good condition 10/11 year old rag top for about 400 bucks.
Convinced me of the fact that a man should own a drop top car at least once in his life(ended up with 3 in my mis-spent youth),unfortunately she didn't survive my high school years as me and some buds out tooling about on a dark country road( that these days ain't all that dark or country) topped a hill to have my headlights reflect off a chrome bumper.
Some local teens had wanted to go check out the "haunted house" off that road but didn't want to get his nice brand new 78 Monte Carlo muddy by parking it on the muddy shoulder so instead parked it in the middle of the east bound lane just passed the crest of a hill with no lights.
Second: 1977 Pontiac Trans Am with the 400 High Output,a buddy of mine sold it to me in 1985 for 1,500 and since he was a friend he threw in a repaint back to showroom new since the drivers side window had been broken and he'd gotten a bone yard deal on two electric window doors so she was repainted to all black once more but with the 79/80 (more gothic and cooler looking) graphic package.
That was one serious bad *** car and if anything you had to work hard at not lighting up the tires and when you stood on her,well hold on tight cuz you were slammed back in the seat.
Traded her in on my first new car in 1988 and thought that would be the last I'd ever see of her, fast forward 20 or so years,a company that specializes in all thing Firebird/Trans Am called Year One announces a deal with Burt Reynolds to produce Burt's Bandits, a classic 77 TA body but with modern engine and suspension and Year One is scouring the country for Firebirds and TA's in sad shape to become Bandits.
I'm sitting at a light in my work truck when a flat bed with a Year One graphic pulls up to the light next to me with a black 77 TA on the back,one of the side windows is busted and she's looking pretty sad but something's just a little odd and then I notice the 79/80 graphics and the little thought is could it be my old ride?
I inched the truck forward to try to get a look down inside to see if I could spot any verifiable personal mods,fortunately the sad condition of interior included the center console's lid had been torn off to reveal the two toggle switches we'd Macguyvered in for the after the fact power windows.
So a happy ending for my beloved TA.
I

My favorite car was a 95 Ford Ranger I bought from my Uncle when I left for college. It was a sad day for me when I let it go I am convinced that for a single person it is probably the most useful car you can buy.

This is currently my favorite car. My 1988 Porsche Carrera.

A lot of other vehicles, but my all time favourite....97 Chevy Astro van. RWD, HD suspension...comfortable...could tow 5500 lbs of trailer...1800 lb. payload and that 4300cc V6 was very torquey and durable. Very practical and useful.

A lot of other vehicles, but my all time favourite....97 Chevy Astro van. RWD, HD suspension...comfortable...could tow 5500 lbs of trailer...1800 lb. payload and that 4300cc V6 was very torquey and durable. Very practical and useful.
Click to expand...

About 12 years ago, my sister and her husband asked me to recommend a minivan for them. They have 4 kids, and he sometimes tows a trailer full of musical gear, and they live in a nice climate (so FWD is unneeded). I said to get a Chevy Astro, and they still have it today. It's a '96 model has 250,000 miles and still runs great. It's their default vehicle for when their other cars (Saab, Mercedes) are in the shop for repairs. If they lived in a bad weather area, I would have recommended the AWD version.
L

jd_1138 said:
About 12 years ago, my sister and her husband asked me to recommend a minivan for them. They have 4 kids, and he sometimes tows a trailer full of musical gear, and they live in a nice climate (so FWD is unneeded). I said to get a Chevy Astro, and they still have it today. It's a '96 model has 250,000 miles and still runs great. It's their default vehicle for when their other cars (Saab, Mercedes) are in the shop for repairs. If they lived in a bad weather area, I would have recommended the AWD version.
Click to expand...

I wasn't too hot on the idea when my Dad....around '93-94 suggested we consider an Astro van for the trailer towing and utility work we had planned...also our kids were young, we did a lot of traveling, activities, etc. But we got a new one in '97 and I have to say I was astounded how capable this vehicle was...too bad GM discontinued it.

As you say it was RWD and it was more truck than all the FWD minivans we checked out.
I don't usually miss vehicles that much...but this one I certainly do. If GM brought out an Astro replacement...RWD, etc....I would be first in line. 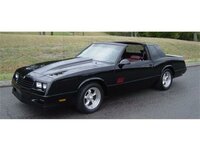 If I ever hit the lottery, I'm going to buy a 1987 Chevrolet Monte Carlo SS and do it up! Always liked this car.

For me, fun means affordable and something you can maintain yourself. 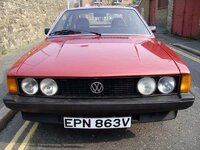 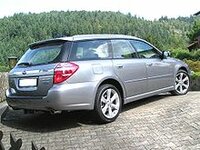 My favorite car was the 1950 Ford my father had when I was really little. If I had money to burn I'd find one and have it restored. I've owned a bunch of cars but none stands out as a favorite. I suppose I should say the 1966 Karmann Ghia that was my first car, but I'm only saying it because it's what's expected. Truth be told it looked like a Porsche but it putt-putted like the Beetle with which it shared an engine. Couldn't beat a 3 speed Raleigh in a sprint.

Dang, would take me a day and a half just to wash it

Bringing fresh meaning to the idea of a full-size car.

Contributor
It would be my Sprite. Those were the days!

There was a German exchange kid at my high school who would call a big 70s car "das strassenboot." 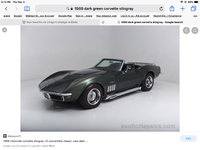