Who can name movies or TV shows that have shaving scenes.

First episode of Family Affair. Uncle Bill is sitting in the tub shaving. It appears to be a Gillette of some sort.
Last edited: Feb 19, 2020

Went to see Call of the Wild with my wife tonight. Relatively early in the movie, there is a scene set in Alaska where one miner is shaving another with a double-edge...axe, that is. Only lasted a second or two, but it startled me. And made me wonder if an axe could be sharpened enough to do that!?!
W

On the HBO documentary McMillions - they flash an image of a Black-Handled TTO razor (perhaps a Gilllette Adjustable). I think it's in the 2nd episode

In the movie Misery, Annie shaves Paul with a straight razor.

Police Academy. Jones is shaving with a manual, but makes sounds an electric would make.

Has anybody mentioned the Aqua Velva scene in Twins?

Ambassador
Just caught Damian Lewis shaving with what looks like a contract Tech in Band of Brothers (Bastogne).
N

In the HBO series "Westworld" (season 3; episode 4) the character William uses a straight razor and is then helped by Charlotte. I would need some help identifying the razor

Bob lathers up with a brush and a mug of soap, then starts to shave with a straight before being rudely interrupted:

Bruce Wayne shaving with some fictive DE in Batman: The Animated Series - The Last Laugh

Winter in Wartime: the main character is seen monkeying with his dad's straight razor. Dad is walking by and notices and teaches him how to use it. That same razor is later used by a downed RAF pilot after the main character brings it to him in hiding (Dutch.)

Platoon: there is a scene of a guy shaving in the field. (American.)

Lebanon: The Israeli tank commander has lost it and lathers up and shaves only part of his face in the tank. (Israeli.)

A Simple Man: Colin Firth's character is seen shaving in the opening scene. Later on it shows his bathroom with his kit. (American.)

The Longest Day: the American commander is shaving and receives an update on the invasion. (American.)

Babylon Berlin: there are numerous scenes of people shaving in various episodes. (German.)

Kokoda: An Australian officer is seen shaving with a straight razor just before they are attacked by the Japanese. (Australian.)
Q

California Cajun said:
Detour (1945): Tom Neal shaves with a DE razor and what looks like a 30mm brush.

Dark Passage (1947): Humphrey Bogart shaves with what looks like a slim DE razor after the bandages are removed from his face, but all we see is the razor being put down after he finishes.

In one of the James Bond movies, a DE razor is used by Bond.

Identifying the razor is something I can't do.
Click to expand...

California Cajun said:
Detour (1945): Tom Neal shaves with a DE razor and what looks like a 30mm brush.

Dark Passage (1947): Humphrey Bogart shaves with what looks like a slim DE razor after the bandages are removed from his face, but all we see is the razor being put down after he finishes.

In one of the James Bond movies, a DE razor is used by Bond.

Identifying the razor is something I can't do.
Click to expand...

From the 1990s television “Due South”, Paul Gross uses a straight razor in the episode “One Good Man”. Good lather too. 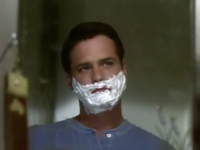 I saw this short film not too long ago.

My wife watches Poldark; last night she showed me a scene, I believe near the end of season 4 episode 6 in which Poldark shaves with a straight razor.

He has a very thin lather, you can actually see that he has stubble beneath it (better than many scenes, in which the actor is clean shaven and then lather is applied).

Having said that, the way he wields that straight razor was truly frightening to me. For one thing, he holds the scales straight back the entire time. More importantly, he shaves with the blade virtually 90 degrees to his face, like he is just physically scraping off the whiskers.

It doesn't seem possible he actually shaved that way, because it would hurt like heck and irritate the skin a lot, but he shows no signs of pain and his skin is clearly not irritated. I'm not sure how they pulled off the scene to make it look like he was really shaving, but I'm sure it was some sort of camera trick.

In "Notting Hill," Hugh Grant shaves with what appears to be a Bic disposable.

In "John Carter," Bryan Cranston cuts himself while shaving with a straight. 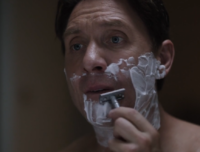