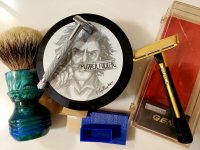 A great start to the week ahead with a fine morning shave.
Happy Monday all! 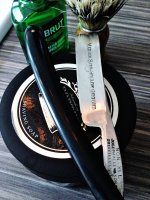 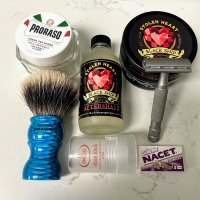 9/10 Nacet blade is a bit sharper than I like, but I'm getting more comfortable with it.

I had a near perfect shave yesterday, (super close), and it seems it was even better than I thought. I had a new Facon Shavette out to try out, for clean up, (I used their Kamasori yesterday, for clean up, and liked it), but...in 2 passes, (XTG, ATG) there was no need for more shaving. The handle on the Piccolo has always been a bit too small, and I had an idea....I have some very thick, high voltage shrink wrap, so I cut a piece, and got the heat gun, and put it on the Piccolo handle. The stuff is durable, like hard rubber, and grippy texturted, and isn't going anywhere. I could remove it carefully with a razor knife, though it is tough. Grip, and feel is much better, so it's staying on, and I like the Piccolo better now 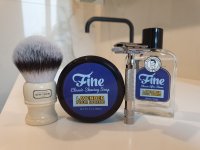 My Monday Morning shave: MdC monday, bowl lathered with the SOC boar. The lather was, astonishingly, different - I would have said it lacked structure and soul - but it performed very well. Three days growth went very easily, a smooth and very comfortable but close shave. No nick or weeper. Great shave!

Shave Rating: 9/10
Trying out a sample of Phoenix and Beau Imperial Rum this week and the first shave today was very impressive! It lathers easily and provides a slick and cushioned lather full of tallowy goodness with a nice post shave feel. Scent wise it has a bit more warmth and spice to it than a traditional Bay Rum and it's definitely a very nice smelling soap (to my noise anyway).
Back to using the King C combination this week and then next week I'll be trying the King C razor with a Gillette Platinum (light blue) next week and the Gillette Platinum (dark blue) the week after to see how they all compare.
Overall a very pleasant shave with no irritation or feedback from the Alum block.

The Karve OC-D is great for me. I wouldn’t use it every day, but it is great when I have a bit extra growth. I haven’t used many Astra SS blades (used lots of Astra SP) and these are excellent. Better than the SP for sure IMO. Top tier blade.

The FCS soap may have an idiotic name, but it is an excellent product as are most of FCS’ soaps and AS. Amazing scent and good performance.

My Beaufort Pure has a pretty ugly looking knot but it has much softer tips than my other Simpson Pure brushes. I really like this one. 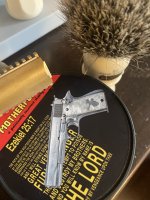 LOL- I know it's a typo, but can't resist- I've had a couple of boar brushes that would actually deserve that designation

RenoRichard said:
LOL- I know it's a typo, but can't resist- I've had a couple of boar brushes that would actually deserve that designation

LOL you are right

RenoRichard said:
LOL- I know it's a typo, but can't resist- I've had a couple of boar brushes that would actually deserve that designation 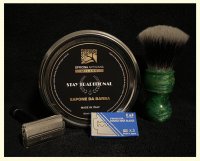 Oh my, this soap. Amazing grapefruit scent and really good performance as well.
This Krona/Kai combo is a winner

A 36-hour beard for an afternoon shave -- and one of the poorest I've had in a while. Nor do I know what went wrong. The particulars:

Mix of Trumper's Almond cream and Barbasol Original, with a walk-on role for Tabac in stick form

I came home from work, washed my face and throat with La Toja stick soap, ran cool shave water with baking soda as I usually do for slipperiness, then loaded the boar with Trumper's. That got whipped in the scuttle and mixed with a spritz of Barbasol. I waited 3 minutes as usual after face-lathering, then applied the Slim on setting 6. It felt rough, as if the beard hairs were not disposed to be cut. Pass 1 WTG, pass 2 ATG with the Slim stopped down to 5, and I felt as if I were using a dull blade. Puzzled, I applied some Tabac to my throat, lathered it, and made a cleanup pass with the Slim reset to 6. No nicks, no irritation -- but the distinct feeling was that I should have waited until I had a 48-hour beard.

I can't imagine the problem. I've used Trumper's plus Barbasol plenty of times and had good shaves (albeit usually on 24-hour beards); the blade was new; the Slim's setting of 6 has been working great for me. True, I used cool instead of lukewarm water, but could that be the issue? The end result is socially acceptable, but my throat feels as if it needs another pass -- but I know better than to risk irritation that way. Odd.

Trollky said:
Back to the ever reliable 37C/Kai/599/XXX combo today and it was awesome

wombadom said:
Had to smile. I too think the KAI and Feather blades balance out the costs with the 2 or 3 extra shaves you get. Normally 3 shaves are the most I get from a blade and occasionally 4 shaves. I get 5 or 6 from KAI and Feather blades. That's doing three pass shaves and maybe some touch-ups.
Thanks for the good post.
Click to expand...

You're welcome. I have the exact same average use you're describing. Speaking of which: 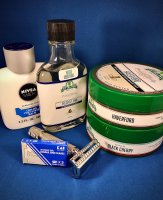 I was able to get a 5th full shave from the Kai blade, and it was comfortable and efficient, but I also had quite a few weepers and some were persistent enough to show up later as dried dots of blood. Not happy with that! I feel confident I didn't add extra passes or buffing, so I'm going to chalk it up to a finished blade.

The shave result was very smooth and close as previously. BBS in most places with some DFS areas under and to the sides of the chin.

I'm enjoying the ride with the German 37 and Kai so much I'll probably start a new blade tomorrow rather than jumping to something else. I'm curious if I can keep this string of consistently good shaves going.

Rating: 7/10. Gotta dock big points for the small but visible injuries which cropped up later in the day (having finally removed my mask!)