I've been DE shaving for about 3 months now.

A guy in an article, blog or post pointed out that most damage done to razors is nowhere other than from being banged around in the sink or when being set on a countertop. As a newbie suffering from RAD, I need to protect my Merkurs, Gillettes, and Feather Artists Club now! awhile they still look new.

My makeshift solution is putting a silicone trivet in the bathroom near the sink:

(this is sized about 6 inches by 6 inches)

Now I set the razor or artist club down on that.

I happened to have a silicone bowl scraper from crate&barrel. This one: 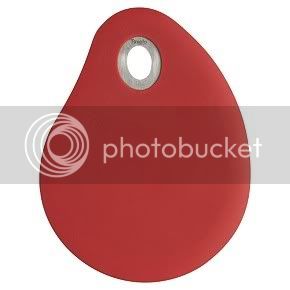 (this is about 4 inches across)

Unfortunately, bowl scrapers aren't that big, so the Feather Artists Club barely fits on it when ajar. Too bad because it looks like an artist's pallet. heh.

I also saw a silicone spoon rest at walmart for $2.99. It looks perfect for a DE Razor. Unfortunately, it says 'Farberware' (or some brand) in the middle. That means I might get sick of looking at it. It's sort of a tray so the Artists Club sets atop the ridges of the tray, I kinda like that. I might upload a pic later.

Like I said, they are makeshift, but at least my razors aren't clankin awhile I figure things out.

Idealy, I imagine laying the razor on a sort of concave soap dish, but larger, that is lined with neoprene, or silicone, but where the heck would I get one of those?

My second pinch crisis has to do with owning 800 razor blades (and dropping (counting those still shipping)). If your wondering, I enjoy trying the various blades, and plan to give razors and blades to friends as gifts and trade them in shave forums.

I don't want my razor blades slowly becomming corroded by moisture. So I got a set of "Lock and Lock" brand containers. I got a three container set from Target for $5.99. They are water proof. And two of the containers fit in the third container. This makes for extra protection and also I don't have to deal with two objects.

Here's a similar picture. The set at target is proportioned differently. Actutally, target has two sets, and also have individual boxes. 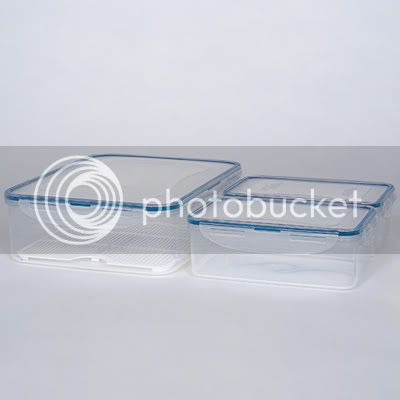 Anyway, I don't have to take the blades out every day--I have a different little watertight box in my bathroom and keep several blades on top-- and I'll be using blades for years, so it's not really overkill. Overkill takes time, energy and $$.

Good idea for long term storage of blades. Bathrooms tend towards the humid side. My wife takes showers so hot the entire house gets steamed up.

Rather than the little paper dessicants, try one of the glass ones sold in camera shops. They change color if the absorb any moisture, so it's easy to see if they're doing their job.
M

As I keep my Futur in a leather case, I just lay it on top of the case when I need to set it down. Prevents the damages you describe.

I use a thick towel and lay the superspeed on it's side.

Have you ever wondered why machinist tool cabinets are wood??? Its to keep moisture at bay on fine tools. I after drying my shaving tools I store them is a small cigar box in a drawer. Try a good looking cigar box, if its full of cigars you will have to use them up first (tell the wife you only wanted the box but the cigars and the box were a package deal). Small cigar boxes are excellent for razor blades. Dessicant packs work well too, I have a generic one from the 50's, its a small brass box with vents and screens. You put table salt in the box, when it cakes up you remove and refill.

KingSlug
You must log in or register to reply here.

B
My first straight razor shave... A miracle in the making (aka what not to do)
2

Hello Everyone! My Introduction & My Adventure In Haircare!