Contributor
This morning I prepared ham and eggs tacos for my wife. I even mixed the tortilla dough and made them from scratch.
For me I cooked bacon in the microwave and scrambled some eggs.
It was a good breakfast.

My little Farberware two-waffle maker gave up the ghost so I picked up this AICOOK that makes somewhat thinner waffles, but four at a time which saves time. 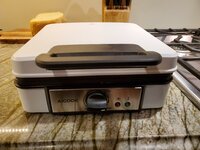 This morning I decided to try something other than traditional waffles. So, I grated a small potato and mixed it with egg, mushrooms, yellow pepper, and smoky Gouda cheese. 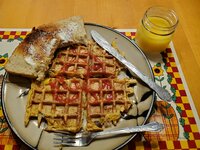 Looked cool and tasted fine but I still think I prefer these ingredients incorporated into a traditional French omelet or with eggs over easy.

Contributor
Fried bacon, sauteed criminis in grease, took pan off heat and threw in diced garden tomatoes. Drained oil into omelette pan, made an omelette with cheese, crimini and toms.

Oatmeal with raisins. A couple slices of turkey breast and swiss cheese. An apple. Tea. 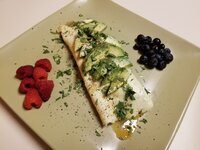 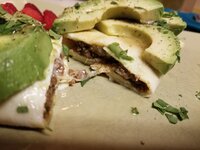 My wife's birthday is Monday, so this entire weekend is a little festival. I got up early to parboil potatoes and then made homefries in a ton of butter and onion; I scrambled a half dozen eggs with more onion and a couple of Irish bangers diced up and tossed in; fried up some black and white pudding, a tomato, and I gave her the last of the rashers we bought last week. She finished her breakfast with a decadent chocolate cupcake with butter cream frosting and some tea.

My wife grew up in Plymouth, Massachusetts, and is a direct descendant of the original 'Pilgrim' Separatists of 1620. They've been there ever since. Her only negative comment about this morning's breakfast was that instead of making homefries I should have made boxty, a sort of Irish potato pancake. At least with regard to fried breakfasts she has become, just like her Norman English forebears of the C13, "Hiberniores Hibernis ipsis." 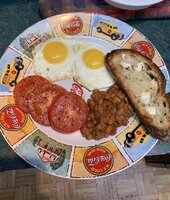 That looks perfect. How do you make your beans? Tomato sauce/paste, molasses, something else?
K

Wasn't hungry this morning, so kept it to a poached egg, a microwaved strip of bacon, and coffee.

Going to make my wife some cinnamon coffee cake muffins and a fruit salad before she wakes up as her birthday festival weekend continues. I'll eat some fruit and I'll certainly whack the Indian food leftovers from yesterday's dinner for my breakfast.

Contributor
I worked a double shift yesterday and am working another today. When I went to the kitchen to make coffee it was already made.
AND
My breakfast was made and my lunch, dinner, snacks, and water was already packed.
My wife is such a wonderful person.

Crunchy peanut butter and raisins on toast, a banana, chocolate milk, and coffee.

I am unaware exactly what Basmati is, but I ate at a Restaraunt in Mexico called Basmati (ironic as I believe that is Indian or something) and it was DELICIOUS.

My son took a pretty hard hit in a football game last night and was showing signs of a concussion so I was up every two hours with him to check on him so breakfast this morning was a PB&J and a NOS energy drink.

trentr said:
I am unaware exactly what Basmati is, but I ate at a Restaraunt in Mexico called Basmati (ironic as I believe that is Indian or something) and it was DELICIOUS.
Click to expand...