Iron Rangers vs. Alden Indy vs. Wolverine 1000 mile vs. Other

I know this question, (or one similar) has been posed 1000 times on this forum, but I didn't see anything in the last year when searching the archive so I thought I would offer my quandary to the current forum populous.

I am in the market for a new pair of boots. I would primarily be wearing these around town and doing light work around my house. Nothing extreme on either end- not looking for a formal boot, nor am I looking for something in which to go logging.

The three boots I currently have on my radar are the Red Wing Iron Rangers, the Alden Indy, and the Wolverine 1000 mile boots. From what I can gather from internet research, the Alden Indy is likely the dressier of the the three, but given my intended use for the boot, it seems it would fit the bill, as would the IR and the 1000 miler.

I have a Red Wing store locally and actually tried on the IRs today. I like the looks of them, though the are extremely heavy. They felt quite rigid (which I expected), but from what I have read from current owners, the IRs will break in over time. They certainly appear to be the most "rugged" of the three.

I also tried on the 1000 Mile boot today. I own a pair of the 1000 mile oxfords and they are quite nice, though I much prefer the Vibram sole on the IRs over the stacked leather sole of the Wolverine.

The Indy is a crap shoot because I have never tried on an Alden product. Many laud Aldens as being the most comfortable shoe/boot they have ever worn, and if they are worth it in terms of build quality and comfort, I have no reservations in spending the additional funds for the Aldens. From what I gather, the Indys are about twice the price of the aforementioned.

Given the anticipated use, what say ye? Could I really make a mistake with any of the three?

Thanks in advance for any reply.

I've worn my IR's 3-5x per week for 5 years. Very comfortable. You can find them cheaper than $300 if you get on the electronic mailing list from Red Wing and watch for their 20% off sales. Unfortunately, I can't provide any personal insight with the other options. I'm sure their owners will chime in singing their praises. I think between the 3, it gets down to what you're looking for and the style preference.

Ambassador
Best bet (as you note) is to go with a boot that you have tried on IMO.

There's also the Red Wing Beckman to consider if you're thinking about the 1000 Mile. Along with my IRs they're my favorite boots.

are you looking to get the cordovan versions of these boots? own the 721s for a while, love em. i’ve tried on the indys and really enjoyed the first feel. i cant remember why i didnt get them also. probably just got distracted.

I got a pair of IR last year so of your list id vote for that. However there is another thread recently about whites boots check them out. My only reservation there is i couldn't do in store sizing

Contributor
I have to agree with others that trying them on is a huge plus. Buy the ones that fit the best and you like the looks of the most.

Consider sizing down a half size or so if you go for the Rangers. The break-in for mine was lengthy and painful but I'd do it again in a heartbeat.
C

I am new to boots but purchased my first pair of Wolverine 1000 mile boots last months and immediately wondered why have I not been wearing these all of my life?
Awesome boot. Zero regrets. I added a rubber sole.
BLISS

I would second taking a look at the RW Beckmann’s - very nice boots and worth installing speed hooks on the top two or three lacings. My experience with RW is that they rake 100 mi to fully breakin and then they fit like a glove. Try before you buy. I have a pair of Alden dress shoes and they are very well made. For boots I think that I would stick with RWs however. You might also take a look at Allen Edmonds who have some near Alden quality products for a fair price.

My only experience is with Beckmans - three hard winters of near daily wear and they still look and wear great. 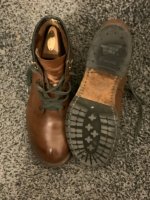 I've had the Indy's for about 5 years. They still look pretty much like new, but I don't use them to dig in the yard. Incredibly comfortable, no break in period. Lots of sizes available.

You're only an hour and a half from

M S McClellan & Co
5614 Kingston Pike,
Melrose Place
Knoxville, Tennessee (call ahead and make sure they have what you want in stock)
37919

Well... Since $550 is your upper range... Check out my thread and check out Nicks Roberts. Yo'll have to be patient though...

Pulled the trigger on a pair of Nicks

OldSchoolYoungin said:
Consider sizing down a half size or so if you go for the Rangers. The break-in for mine was lengthy and painful but I'd do it again in a heartbeat.
Click to expand...

shaverjoe said:
I have a Red Wing store locally
Click to expand...

blantyre said:
I would second taking a look at the RW Beckmann’s
Click to expand...

Yes, go to your local store and try on a pair. I got a pair back when they were called "Gentleman Travellers" and really like them.

I’ve got all three (among others) and from what you’ve listed, I’d suggest the Alden Indy boots, by far. That said, not on your list is a pair of Alden boots (plain toe or cap toe) with a commando sole. They’re lighter, more flexible and more comfortable than the Indy’s with the cork sole.

Contributor
Just bought my wife a pair of the RW heritage Harriet boots for Christmas at the RW shop. RW makes some really nice boots. All I could do not to buy a new pair for me too.
You must log in or register to reply here.
Share:
Facebook Twitter Reddit Pinterest Tumblr WhatsApp Email Link
Top