To inaugurate the sub-forum, I broke out one of the more unusual blades I have accumulated, an open dispenser of Gillette BLUE BLADES (not Super). They are dated U1 (1974), and appear to be near the end of the line for the Blue Blade. They have the early 60's Gillette logo and no zip code, but they have patents such as 2692672 on the dispenser that make 1974 the year of the blade's manufacture.

Shockingly, I got about the best one pass shave I have ever had. Once I could feel that the blade could cut, it cleared my cheeks and jowls effortlessly, with the perfect amount of cutting. By contrast, many Stainless blades, especially modern ones have sort of acted like a drunken driver or a tire in rain, you feel like everything is so smooth, you go along carefree until a disaster happens, like a weeper.

When I got to my upper lip area (my test of a blade), I found that for WTG it was unsurpassed, and that by doing WTG with some WTG clean-up it gave me a great shave. Usually, I would do a WTG and then a XTG. With the Blue Blade, I felt lots of resistance to doing an XTG and did not do it (just as I am a brushless cream man, I am not an ATG man).

Then, I rinsed the blade in 66&#37; alcohol Kananga Water to try to preserve it for another round....

UPDATE: Went back and reread blade. Patent 3071856 is on blade. This is a 1963 patent for putting flourocarbon coating (like Teflon?) on the blade. Thus, it appears the blue blade at the end was, to use the phrase of ASR "Comfort Coated".....Still good after 35 years! I wonder if the super blues made a switch from Silicone coating to Teflon coating along the way? If the Super Blue has the above patent on the blade, it appears that it did!
What an experience!
Last edited: Jun 26, 2009

Very cool. I need to search through my Blues for one from that era. I have a NOS carton of 1936 Blue Blades that will be nothing more than display, though.

AsylumGuido said:
Very cool. I need to search through my Blues for one from that era. I have a NOS carton of 1936 Blue Blades that will be nothing more than display, though.
Click to expand...

I would not want to shave with those.

Interesting review on the (later production) Blues. I have been holding off on these as was never able to ascertain whether they were coated or not. Guess I'll have to pick some up and give them a shot, after I give a box of Thins a tryout.

I recently got a decent shave from a 1961 Super Blue. I then tried a 1961 THIN that was as dull as a butter knife.

Further Update....Today I had shave #5 from the 1971 Blue Blade. It is nearing the end, but what I like about the flourocarbon coated blue blade is that it is just about impossible to cut yourself with the blade. I don't try for a BBS and don't do ATG, and this blade gives a good quick shave with a minimum of fuss. The later blue blades are super rare, however.

I compared the 1971 BB with a 1983 Super Blue Blade, of which Gillette produced many more of in the 70s and 80s. Both had the aforementioned patent about adding flourocarbons to the blade surface. The 1983 Super also had two other patents on the blade: one about a specific method to add the flourocarbons and two, a "hardening" process to apply to carbon steel blades to give greater longevity to the blade.

With the Treet Blue Blade possibly being discontinued as at least one vendor lists them as being out of stock from them forever, www.tinyurl.com/badgerblade


and the ad copy for that blade being removed from treet's website....it appears that, other than possibly China, there is no more "blue blade" production worldwide, although some have stated that the bluing process is obsolete as long as a carbon steel blade is coated with PTFE or its equivalent (Treet still makes those blades).

I like testing out the old carbon blades too. I've tried the uncoated Blues and the ones I have are not in shaving shape...pretty rough. I have a couple of packs of more recent Blues that I'm not sure are the coated ones described in this thread. I'll have to check the patent # and give them a try soon.

Straight Arrow said:
I like testing out the old carbon blades too. I've tried the uncoated Blues and the ones I have are not in shaving shape...pretty rough. I have a couple of packs of more recent Blues that I'm not sure are the coated ones described in this thread. I'll have to check the patent # and give them a try soon.
Click to expand...

I acquired some Rexall Extra Keen Concave DE blades some time ago. I have only tried one; the shave was kind of rough, but the overall shave wasn't bad at all. I think it would be fine if I had enough to get used to.

I too shaved with a late 60's era Gillette Blue today.

It was possibly the finest cutting blade I've ever put to my face. I was using a non agressive (atleast for my taste) Gillette Travel. 2 passes and some buff/jhooking on the jawline and I was bbs. And this is coming from someone who liked a Futur on 6 with Derby Extras.

I can remember as a kid(late 60's I guess) being sent to get blades for my late father and can always remember being warned NOT to bring Blue Gillettes. IIRC his brand was Gillette Super Silver (?)

I have some 1966 Super Silvers (made in UK). They are the equivalent of the US made Super Stainless. I like them a little better than the US ones, but prefer the Blues with the coating. Don't know when they started coating the Blues, the patent was from 1963. Kmart sold the Super Silvers in the US as a grey-market import through the early 70's, often in a Kmart blister pack.

Would you by chance have a pic of the Blue dispenser? Thanks.

I ran across some of those once, and now wish I had bought them.

Most of the later blue blades I have seen are not in dispensers, however. They use the more modern Gillette logo (as shown on this Super Blue package) and are blister packs of 5 individually wrapped blades. Some even have UPC codes on the back (post 1975).

The Super Blues as shown here are excellent as well. Oh look, this 1976 has only the one patent on it as well

Appreciate the info, thanks! 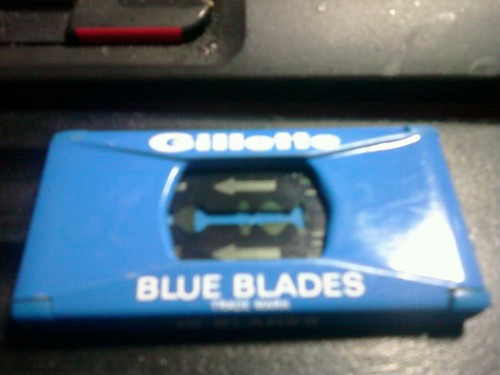 Am home now, so took a photo of it. It is a slightly darker blue than in the picture, but brighter and not as dark as the first picture I posted above.

I have a few used blue blades that were in a blade bank along with assorted stainless. I think these are from the 50s because the razor was from 1946. Anyway, I have one of those old DE stroppers that looks sort of like a hand crank, wall mounted pencil sharpener. I'm going to try stropping and using one of these old blades just to see how well the stropper works. I was cautioned by Dave Irving not to use stainless blades in the stropper because they would just tear it up. And speaking of Dave, has anybody heard from him lately?
P

I swapped messages with Dave late in 2009.

My question is this - has anyone tried the original Super Blue Blades with the silicone coating?

I'm thinking of getting these Gillette super blue blades for my new (1959) SS RedTip.

What can you guys tell me about these blades?

p.s. FYI, it's a no-no to post a current ebay aution on the forum.

Sorry about that -obviously a newb here. I couldn't find any info or reviews about them on the web, so I thought I would get an idea from the group after they saw the blades. This place has alot of rules, but I think the community is better for it. Thanks again.

JakeBrake said:
Sorry about that -obviously a newb here. I couldn't find any info or reviews about them on the web, so I thought I would get an idea from the group after they saw the blades. This place has alot of rules, but I think the community is better for it. Thanks again.
Click to expand...


Not a problem with me. I guess some enterprising fellow was using the forum to boost his ebay auctions. I hope you got them, if you wanted them.
You must log in or register to reply here.

To use or not to use vintage razor blades?
2