Do you really need adjustability in a razor? My answer is - NO.

Northstonehill said:
I think adjustables are really cool designs with their old school mechanics. I don’t change settings on them today but still find them awesome to use. And one day, when I get bored I will play around with adjusting the setting between passes

I've found that the same razor shaves differently with various blades. I can dial in my adjustables to get an optimum shave with a particular blade.

Contributor
do you really need a car with automatic transmission? do you need 200 channels of programming to watch?

emwolf said:
do you really need a car with automatic transmission? do you need 200 channels of programming to watch?

Strawman question. Reality is that once you discover what the proper setting/aggressiveness works best if you on an adjustable razor, you never need to adjust it again. Adjusting for blade differences is perception more than reality. So, what's the need for an adjustable razor? None.

Contributor
Except one's face changes every day. I'm more oily during the summer months so I never use balms during the summer. I dry out in the winter. And, yes, I do dial up during my shave.

MntnMan62 said:
I have to agree that you don't need adjustability in a razor. I have a Slim Adjustable, my only adjustable, and it stays on one setting. After playing around with the settings I found the one that works best for me and it's stayed there ever since.
Click to expand...

It sounds like you took advantage of the adjustability perfectly.

You bought the razor, tried a few settings, then found the one that was ideal for you.

That’s what adjustables are about. It’s not about tweaking the settings on every stroke, but in producing a razor that allows the user to customise the aggressiveness to match their face and blade choice.

To get the same level of choice in a non-adjustable, the only option would have been releasing nine different razors to match the nine available settings. And even then there’s no guarantee most people would buy the right one first go.

Contributor
Seriously, how many times do you change the setting on your adjustable razor? Different blades or different oil on the skin has been mentioned but seriously how much difference do they make to warrant adjusting the level you normally shave at?

Sonoftakis said:
Seriously, how many times do you change the setting on your adjustable razor? Different blades or different oil on the skin has been mentioned but seriously how much difference do they make to warrant adjusting the level you normally shave at?
Click to expand...

3 times during a shave

emwolf said:
do you really need a car with automatic transmission? do you need 200 channels of programming to watch?
Click to expand...

Nope - got 2 - 6 speed manuals parked in the driveway. Don't have cable. Do have a bunch'a different vintage razors & several different brands of blades. Some blades work best in a particular razor. The adjustable allows for a larger variety of blades to give an excellent shave.

Contributor
If you need an adjustable to compensate for different blades then you haven't mastered the art of shaving.

Guess we can't all be as special as you think you are.

Contributor
Quite often my head needs a much more aggressive setting than my face. For some reason my beard whiskers are easily removed by a very mild razor, where my hair will take several passes with a mild and still have some roughness.

Set it and forget it.

There are lots and lots of reason why someone may want to adjust mid-shave....or adjust from one shave to the next. The attached Toggle instructions point out a couple of valid, to me, reasons. You may not like them, you may find the entire notion silly, but very few are a result of operator error. No reason to take the conversation there either.

I love my Parker Variant, got it about a month into wet shaving, and despite buying a few other razors since then, it remains my most used razor.

I started with mild setting (1.5) using reasonably sharp blades (Astra SP). My razors before that, the ones that I learned with, were both mild - a supermild Baili 176 and a mild-to-moderate Baili TTO. I don't think that I was ready to use a more aggressive razor yet.

Pretty soon, I started setting Variant on 2.5, then 3.5. About a month ago I switched from ASP to Feather as my blade of choice. First using it on lower settings, then in a couple of days going back to 3.5. So in about seven months, I went from a mild setting with a reasonably sharp blade, to a moderately aggressive setting with a very sharp blade. All the while keeping my Variant. If I didn't have an adjustable, I'd need to get three separate razors to get through the same journey.

I don't know where I will go from here. I may go back to using milder settings (they say that a mild razor paired with a sharp blade is the best combo), or I may opt for a far more aggressive shaving style. Who knows. But what I do know is that there's still plenty of unexplored potential in my Variant.

Now, just like most of us here, I enjoy trying new razors. However, I also love my Variant. I don't want to be forced to buy a new razor that's just like the one I already have but more aggressive or milder. I want to spend my money trying something completely different - a slant, an OC, a SE.

So, are adjustables necessary ? No, but they are very useful. Even though I don't change the setting daily, I do change it as my habits, experience, and preferences change, all the while keeping the razor that I like.

Toggle. I rest my case. 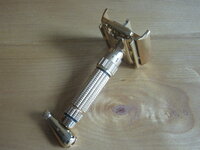 I like my adjustable razors. I don’t use them much but I like them. I get my most comfortable shaves with them. The Rex Ambassador is my favorite. Setting 4 for WTG and XTG, ATG set a 2. Very close comfortable shave every time.

People buy them so they don’t have to buy a ton of different razors to find out what they like, some shave different areas of the body, some people need a really mild razor and only adjustables reach a really mild almost useless setting.
U

ShaverAZ said:
Guess we can't all be as special as you think you are.
Click to expand...

Some seem to really struggle with different opinions, enjoy your shave anyway you like.

Sharp&Shiny said:
People buy them so they don’t have to buy a ton of different razors to find out what they like.
Click to expand...

This suggests gap is preminent in determining what people like. Gillette did a great job of marketing that line, it's certainly not true for me.

jmudrick said:
This suggests gap is preminent in determining what people like. Gillette did a great job of marketing that line, it's certainly not true for me.

Sent from my Pixel 2 using Tapatalk
Click to expand...

Gap /aggressiveness is one of the variables of shaving.

It’s not preeminent, but neither is the blade. It’s the combination of several factors that create specific shaving experience.

Some of these are variables that can be easily and cheaply changed - the blade, the soap, the technique.

Adjustable razors allow the user to easily change one of these factors - razor gap - without having to buy all new hardware.

As we develop new shaving habits, improve technique, or just change our preferences, having a razor that can be adjusted to accommodate that is nice.

It’s especially useful to new shavers that are still developing their technique and don’t really know yet what is it they really like or need. Buying an adjustable early on allowed me to experiment without having to go out and buy a new razor every time. And my tastes keep developing and so do my settings, eight months in.
You must log in or register to reply here.
Share:
Facebook Twitter Reddit Pinterest Tumblr WhatsApp Email Link
Top