Contributor
Well, I took the plunge.

And I am very happy I did. This thing rocks.

ruckin said:
I regret selling my cremena.
Click to expand...

I've tried a friends Cremina and find it produces a decent cup. I can get decent shots on many machines costing a third the price and really never understood the cost factor of a Cremina. A machine like a Faema Faemina (roughly 1K) adds a layer of consistency with the addition of a spring. The spring has repeatable tension that is difficult to repeat with a non-spring machine. Solid brass boiler with integrated group which on it's own weighs 9+ kilos aids in temperature stability. I've refurbished four of these and can agree to their robustness in material quality and design.

And I am very happy I did. This thing rocks.
Click to expand...

You will enjoy using it.

There is supposed to be a new release of Artisan available for download (1.4.0). Are you using that new version to run the hottop?

You can find out what is new and get the release from their web site.

I'm still using the 1600+ up at the cabin so have not bothered to get the new release.
R

I suspect my fascination with the Cremina is that I bought one in the early 1980's was my first quality espresso machine (I am told you never forget your first). I don't recall the price but my brother and I negotiated the sale of two at a good price.

I was in Basel a few years ago and saw a new on in a shop at a shocking price. To be totally honest I am quite happy with my GS3. It is an older AV model and I can make great shots but every once in awhile I think I want a paddle machine and I start looking at the slayer website. In the mean time I am keeping my eye out for a Compak K10, F10, E10 on the used market.

Mick said:
There is supposed to be a new release of Artisan available for download (1.4.0). Are you using that new version to run the hottop?
Click to expand...

I'm using 1.3.1. I did download and install 1.4.0, but I could get no temperature readings, no matter what I tried--that is, until I uninstalled it and installed 1.3.1. I posted my problem on the Artisan email list, and and Marko (who maintains Artisan) replied that the Hottop communication is broken in 1.4.0. A v1.5.x should be out soon that addresses that and other issues that came up with 1.4. I'm still just learning the basics, so I'm not in a rush at all for new versions.

I've only done a couple of roasts, so far, both with the La Minita (I have a bunch of that and am most familiar with it). The first was just taking the manuals advice and just running the Auto program to see how the machine behaves. That went from 1C to 2C with very little pause, and I dropped it just as 2C was really getting underway (I might have done it sooner, but I was taken a bit by surprise). I used Artisan to monitor the roast in order to see how that works live and in person. That batch actually made for a nice cup out of the French press with only about 18 hours rest, which was a pleasant surprise.

For the second roast, I operated the roaster manually via Artisan in order to get some idea how that might go. That was pretty slick! The information and control makes for a more engaging roast. That batch came out pretty good, too, and I was just monkeying around a little. I look forward to working with future roasts and having profiles to compare.

I always drop heat as soon as 1C starts to extend the time in development. Watch your temps and ROR as you don't want any drop in BT, just a slow down.

How much depends on the bean.

This morning's latte... courtesy of a Cremina 67 built in 1977 and a Macap M4 ... using Malabar Gold ground very fine, twenty five second pulls. Was gifted the Cremina 67 thirty years ago, never out of the box, new. Had it overhauled up in NW Idaho by a master technician about four years ago. Coupled with the M4 grinder, exquisite espresso. Going back to Redbird Espresso next five pound order. 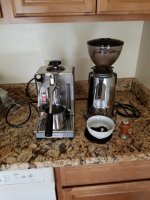 Climb14er said:
This morning's latte... courtesy of a Cremina 67 built in 1977 and a Macap M4 ... using Malabar Gold ground very fine, twenty five second pulls. Was gifted the Cremina 67 thirty years ago, never out of the box, new. Had it overhauled up in NW Idaho by a master technician about four years ago. Coupled with the M4 grinder, exquisite espresso. Going back to Redbird Espresso next five pound order.

I love to see stuff be rebuilt instead of thrown out. Well done!
R

Speaking of re-purposing older machines... I have a couple old (okay ancient) LaPavoni single group pub machines that could use a good going over. These things are huge, heavy and require plumbing, but the pump is not external and it runs on 120v. I am not quite sure what to do with them... I have been looking for quite some time but have thus far been unable to find a "round toit" to spiff them up and send them on down the road.

My new toy Thinking about doing a journal to document learning how to use this thing.

bray144k said:
learning how to use this thing
Click to expand...

It's almost easier than an automatic drip maker. Fill the bottom with water up to the valve. Fill the filter cup with moka ground coffee (level, but don't tamp). Put the thing on the stove to boil. When the coffee starts coming into the top, turn your burner down so that you have a slow but steady flow (turn it down earlier if you like and don't mind a longer brewing time). When it starts to gurgle/sputter, remove the pot from the heat. Enjoy!
K 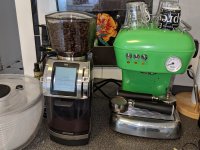 Yes the green machine is what I use for espresso. It the Ascaso-dream-up has been a wonderful beast. Needs a bit of a wipe. Minimal maintenance. I replaced a switch. Have the kit for the ball valve etc. but not needed yet.

3 lbs of coffee. Fresh roasted and about for the cost of going to $tarbucks a dozen times.

I realize it will not be as fresh roasted by the time I finish it. It will still be very very good to the last drop.

3 lbs of coffee. Fresh roasted and about for the cost of going to $tarbucks a dozen times.

I realize it will not be as fresh roasted by the time I finish it. It will still be very very good to the last drop.
Click to expand...

Agreed. While I am a big proponent of freshly roasted coffee. I find that a month old roast or even six weeks old can be very good. As long as it is capable of being brewed as espresso it is good for other methods as well in my experience.

Took advantage of Seattle Coffee Gear's sale on holiday blends and am trying out a few things from roasters I can not usually get locally. 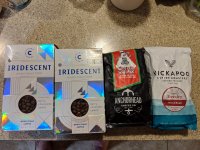 I've been a member of B&B for two years now, mostly for the shaving info, but this is my first time in The Café. I've spent two years finding shaving items at flea markets and antique malls but I also have a nice collection of Art Deco coffee percolators. All of them work and most make great coffee. I paid $10 to $20 each for them and now you can't find most of them for less than $50. I think , maybe, I drove the price up. 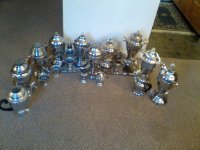 Well, finally broke down and went back to the thrift store that had the coffee apparatus and it was still there waiting.

Moka pot is stainless but not a big name. Irmel Nova Espress (Italy)