Today I received a Blackbird razor that I bought from another gentleman here on the BST. It was a remarkable bargain - a polished safety bar Blackbird in stainless steel for roughly 55% of the current going price. So here is my new razor: 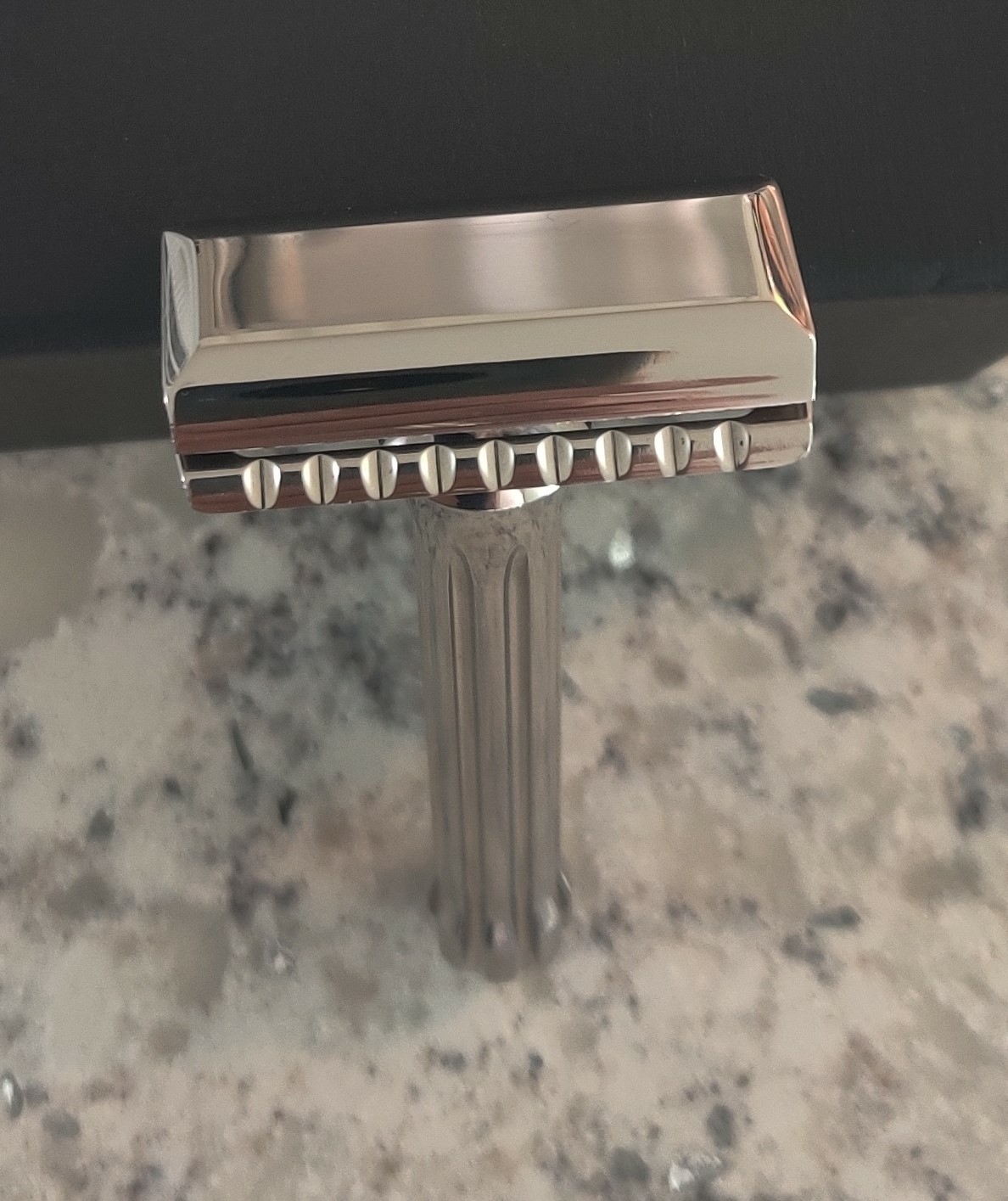 As you can see, it's very difficult to tell that this is not a brand new razor. What surprised me most upon opening the box was how elegant the razor looks. From photos I always thought it was more massive and quite industrial looking. That is simply not the case. I was also curious about the weight of the razor, particularly compared to my current favorite DE's, the Dart and the brass Karve CB. The Blackbird is the lightest of the three at 3.37 oz, followed by the Dart at 3.56 oz., and unsurprisingly the brass Karve CB is the heaviest at 3.99 oz. But the proof of the pudding, as they say, is in the shaving. So I held off on my morning shave until after lunch so that I could give the Blackbird its first flight. I loaded it with a new Personna Israeli red blade. That is the blade that I have used most and the one which allows me to get a good sense of how a new razor compares with the others I own or have owned. Then I lathered up using Shannon's Haymarket Vetiver and my Yaqi Rainbow Brown brush (it is, after all, pride month!). My BB has the short handle, and that took a little bit of getting used to, as it is the shortest handle of any of my current razors. Perhaps, however, the shorter handle contributed to the lighter weight and overall nimbleness that the BB exhibited. It was simply a pleasure to use. Yes, there is some blade feel, but it is never intrusive or uncomfortable. Using the Karve and Dart for comparison, I would say that the BB is the smoothest, followed by the Karve. The Dart is still quite comfortable, and I could quite happily used it daily as my only razor, but it's not as comfortable as the other two. Getting back to the handle, it provides excellent grip and by the second pass I had happily adjusted to the shorter length. All things considered I think I would actually opt for the shorter handle if given the choice.
So after my usual two pass shave plus touch-ups, what was the result? No cuts, nicks, weepers or irritation and a wonderfully smooth BBS shave. In another post earlier today I said I thought that it was equally efficient as the Dart and Karve, but now I'm starting to think it might be slightly more efficient. Then again, it's only been one shave so it's probably too soon to say. It is safe to say, however, that I will very soon have many more shaves with this razor to use for comparison purposes.

Congrats on the new razor... glad you enjoyed your first shave with it.

Over time, my SS Blackbird SB has become my favorite razor. For me it works best with a Gillette Silver Blue blade and a steep angle, and two or more days since my last shave. I shave with warm water in my sink, and hold the Blackbird's head under the water for a few seconds so it feels nice and warm on my face.

Like you experienced, it consistently gives me a very smooth shave with no nicks or weepers and a genuine BBS result!

Congrats on your new Blackbird and congrats on a great deal; I also purchased a used polished BB here on the BST for considerably more than yours. But I'm not complaining, the BBird is worth it. I compare the efficiency to my Muhle R41 and the comfort to my Edwin Jagger DE89.

Congratulations on you beautiful Blackbird!

Makes me want to shave with my Stainless Blackbird SB.

Congratulations on the Bird. Very nice razor with great performance. Hope it provides many years of excellent shaves. I find Wizamet blades work great in my Bird.

Congratulations on the Blackbird. I purchased mine last November, shave daily and other than when away from home rarely use any other razor. No razor I own shaves closer or gives a longer lasting shave. My favorite blade in this razor is a Nacet, but GSB, Personna red and Personna lab blades are all great in this razor. I also prefer to shave steep which works well with this razor.

Lookit what I found…

I think the question is, "Is it Brass or is it Stainless?" It looks Brass but we all know how some pictures come across on the internet!! For the price I would think its a Brass OC so maybe someone should contact them to correct the description...

I'm still waiting for mine and I hope I will get it next week.

muzichead said:
I think the question is, "Is it Brass or is it Stainless?" It looks Brass but we all know how some pictures come across on the internet!! For the price I would think its a Brass OC so maybe someone should contact them to correct the description...
Click to expand...

Gotcha. I didn’t catch the discrepancy in the description before I posted the pic. It is a listing for a brass Blackland Blackbird open comb.

muzichead said:
I think the question is, "Is it Brass or is it Stainless?" It looks Brass but we all know how some pictures come across on the internet!! For the price I would think its a Brass OC so maybe someone should contact them to correct the description...
Click to expand...

Hannah's Dad said:
… and also ‘is it open comb or safety bar?’

Major RAD is building up because of this thread

LRod said:
Major RAD is building up because of this thread

Yep, me too. When I get home, I have to get some things cleaned up and pictures taken to list on BST. I could order first and sell later, but I’m trying to learn restraint.

Hard to do, hanging out with all you enablers.

It also kills me when I order something and it gets delivered after I go to work. Last time, my items sat there 5.5 days before I got back. (It arrived a couple hours after I left for work.)
Last edited: Jun 3, 2022
You must log in or register to reply here.