After weeks browsing through period paper ads, catalogs, consulting private collectors, even digging through the pages of the Library of Congress, here's the long-overdue updated version of this humble work of passion. If Gillette razors are easy to date because of their serial numbers and date codes (and also for being immensely more popular, especially nowadays), the dating of Gem, Ever Ready and Star safety razors is a completely different story.

For a few years, a dating chart has circulated around the forums. After I went deep into the Single Edge rabbit hole I soon discovered it was largely incomplete and sometimes incorrect.
Also, Wait's "A Safety Razor Compendium" besides being a great source of information and a great starting point, it doesn't cover the many variants and it falls short when it comes to more recent times.

This chart remains a work in progress, it may contain errors and it's by no meanings complete. The more I dig, the more information comes to light. But as I considered the dating chart I've posted some time ago has beefed up enough, it was time to make it to version 1.2

Special thanks go to @Ron R for being the first who spread the chart around the forums and for his great job in testing and introducing many Gem razors, to @jmudrick who shared his immense knowledge and made a few well-needed corrections, to master collector Mr. Lorenzi for his enormous effort to display his monstrous collection at Collector's Encyclopedia.com

Yes it's getting bigger, please click to "open in a new tab" or save the chart on your computer. By Beta 1.3 I would have to post separate images lol!
Feel free to share the chart and publish it wherever you like. No TM or any rights reserved.

For anybody who loves Single Edge Razors like I do I invite you to visit the brilliant Gem Razor Models and join us for a Micromatic Monday !

Moderator
Very impressive. You may want to put this in the shave wiki.

ackvil said:
Very impressive. You may want to put this in the shave wiki.
Click to expand...

Thank you! Well I've tried to put it in the shave wiki but either my connection is too slow or I'm useless at it. I never posted anything on wiki before

You are very welcome my friend!

mata_66 said:
Thank you! Well I've tried to put it in the shave wiki but either my connection is too slow or I'm useless at it. I never posted anything on wiki before

You are very welcome my friend!
Click to expand...

Great work, it takes a lot of time to compile something like this and make it easy & interesting to read like this 1.2 beta version .

Thank you Ron, yes it was indeed time-consuming but it was great fun!

A few interesting things I discovered that I wasn't aware of:

Zinn introduced a thin wafer disposable razor blade before Gem/Eveready did. It wasn't a commercial success but it served as inspiration for later blades such as the Durham Enders and Schick "injector" blades.

ASR built its factory in Great Britain only in 1936. That postpones all the "British Made" Ever Ready New improved and Star 1912.

I could date some of the Gem handles. This narrows the dating of one's razor. For example, if my 1912 has a "chainlink" handle it's a 1927 or later.

Looks like you found the proper name for the AKA Squat head, 1925 Supreme & Triumph models that a few of us could not figure out. I called them the "minute man" from some previous information for a bathroom wall hanging case they came in. Some were calling the razor the beast because it is aggressive.
Great sleuthing and I could see it being some what enjoyable for a GEM keener like yourself.
Have some great shaves!

While I was browsing through old archives I also uncovered details about who were the people who set this movement in motion. The Zinn family for example, as I previously discussed with @Ron R in a private message.

"The story of this manufacturer starts, like so many others, with a Jewish immigrant, Simon Zinn, who was seeking a better life in America in the mid 19thcentury.

Born in Bavaria he left for ‘The Alternative Promised Land’ in about 1847, when he was sixteen years old. Like many Jewish immigrants he gravitated to areas of employment that his ancestors had been restricted to in Europe. In Simon Zinn’s case it was to manufacturing metal goods in New York. By 1880 he was well established both professionally and personally. On the professional side he was co-owner of a company known as Zinn and Messer – ‘Manufacturers of Fancy Metal Goods of Every Description’. The company had been established in 1875 and his younger brother, Alfred, was also involved in the business that manufactured locks, clasps, frames, rims, corners, catches and ornaments for pocket books and cases. On the personal side, he and his Bavarian-born wife Mary had produced seven children between 1865 and 1878, two of whom would go on to continue his business. By 1892 Simon Zinn had become the sole owner of what was, by then, a very successful company.

When Simon Zinn died, in May 1897, his wife Mary and his two eldest sons, Martin and Arthur assumed responsibility for the company that was still known as ‘Simon Zinn’. But new opportunities presented themselves and the three Zinns entered into arrangements that saw them starting to manufacture safety razors. As a result, a subsidiary company, known as The Gem Cutlery Company, was established in about 1898. While the Zinns had equal ownership they also took in another partner named Frederick Hoffmann who actually managed the razor company leaving the Zinns to manage their original metal novelties business. It was probably the death of the Zinn matriarch, Mary, in May 1919 that was the catalyst for change. Mary had been very much involved in the business following her husband Simon’s death and it was probably at her insistence that the Zinn family became involved in safety razor manufacturing. It certainly made her and her family very wealthy. But when she died her two sons Martin and Arthur decided to make changes that would affect The Gem Cutlery Company. In fact, another safety razor manufacturer who wanted to buy the Gem Cutlery Company had approached them in early 1919. They were offered $4 million – a huge amount in those days but if they agreed to sell at that price the tax bill would also be enormous.

In a move that Donald Trump would say was ‘smart’, rather than illegal, the Zinns and the co-owner, Hoffmann gifted their interest in the Gem Cutlery Company to their wives, thereby avoiding the tax! The sale was finalized in September 1919 and despite the Commissioner of Internal Revenue challenging the ‘gifts’ as merely designed to avoid tax that decision was overruled seven years later. The Zinns, meanwhile had received the full sale price and had become, as a result, very wealthy, indeed".

From Collecting Vintage Compacts: The Zinn Corporation – An Anonymous Spark in Compact History 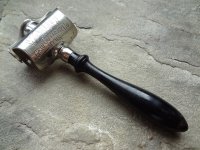 The great thing is you can use a modern Schick blade (Proline I'm looking at you!) instead of the proprietary Zinn wafer thin blades.

Ron R said:
Looks like you found the proper name for the AKA Squat head, 1925 Supreme & Triumph models that a few of us could not figure out. I called them the "minute man" from some previous information for a bathroom wall hanging case they came in. Some were calling the razor the beast because it is aggressive.
Great sleuthing and I could see it being some what enjoyable for a GEM keener like yourself.
Have some great shaves!
Click to expand...

Yes, the 1925 "Triumph" model with the "squat" head came with a free wall cabinet, the same sold the year before as the "Minute Man" set.

The great thing is you can use a modern Schick blade (Proline I'm looking at you!) instead of the proprietary Zinn wafer thin blades.
Click to expand...

They have two for sale on _bay, just type in Gem Zinn razors.

Thanks for taking this on. Great job.

What a great chart! I really appreciate the time and effort you must have put in. Loads of great info. Thanks

Ambassador
This thread is gold. Thanks to all involved!

Thank you guys!!
B