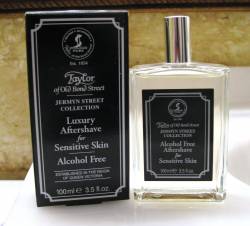 Pros: Unique scent, smells upscale, wouldn't call it masculine
Cons: way too viscous leaves a sticky film on your skin no matter how little you use
This stuff is just way too viscous to use as an aftershave, it leaves a sticky film behind on your face. However, it does have a very unique classy scent. I wouldn't call it manly, but it definitely is strong and lasts for hours. I use this more like a cologne on my clothes. The atomizer is also very poor, I've heard this from other users as well; it doesn't really shoot out a spray but a straight line instead. Another great plus is I've used this stuff several times over the course of the past few months, and it's still full. I wouldn't buy it again though, as I've heard they recently released the cologne version. Not a great aftershave, but the scent and longevity of the scent make it a useful buy as a cologne.

Pros: Great Scent, Works Well
I am a big fan of ALL TOBS Jermyn Street Products. I think their scents are one of the best around.The After Shave (to me) is one of the best around. It has a very masculine, non floral or citrus scent.It is alcohol fee so no burn when applying. The scent is so nice that I even have their cologne.4/18/12 update - I took off the atomizer since I didn't like the "stream" it put out. But now, the AS seems very thick & greasy. Not sure why but now the AS is very oily. Can't use it at all.

Added by
The Soph Gent

More from The Soph Gent