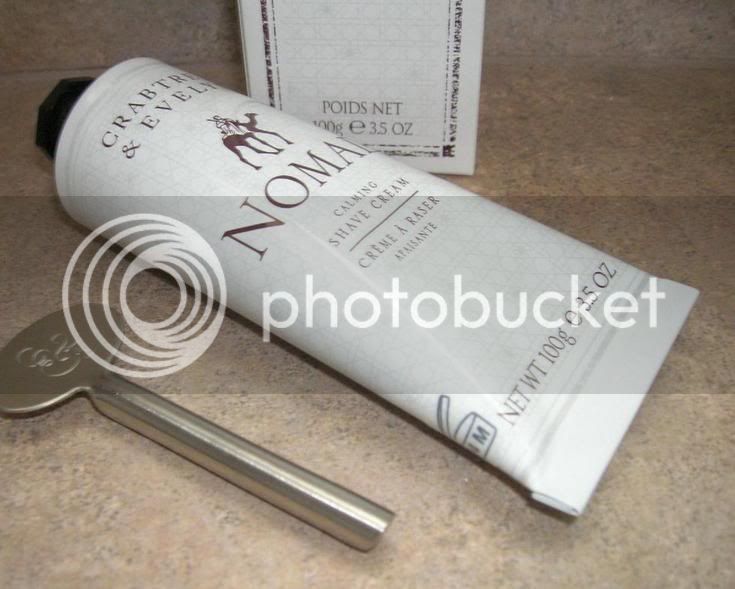 I know that there are many gents who really like this product. It is, however, simply not for me. As I stated in a prior post, there could be an outside chance that I received a mildly defective tube, but I love my shaves way too much to take the chance of another tube's worth of average shaves.

Price - It depends on whether you choose the tube or the tub. The following is a price by ounce comparison to Taylor's and Trumper's in tubes and tubs:

Packaging - The tube is a standard metal tube. It is neither special nor underwhelming. It is what it is, and I feel indifferently towards it. The bonus of the package would be the metal tube key. This thing is kind of cool (nostalgic) and when I'm done with the C&E, it will be passed on to the Proraso, toothpaste, etc.

Scent - very nice. The first time I smelled this scent was directly after smelling the Sienna and Sandalwood scents, and with those fragrances still floating around, I wasn't overwhelmed. To give it a fair chance, however, I left the store for a few minutes and then returned, giving it first whiff. I found/find this to be a very clean, almost grassy smelling cream with the scent provided by ginger, citron, and bamboo. I was impressed enough that I decided to go for it. Even now, the biggest deciding factor that keeps it in my collection is the scent.

Moisturizing Properties - As this cream is classified as a "Calming" product, I was a little disappointed to find it very average in the arena of moisturization. I suppose the "Calming" claim gave me some false expectations. That being said, it does OK in this area.

Latherability - This cream has lathered oddly for me. The first three shaves in which I used this product, I relied on a visual judgment to determine when I had whipped it to optimal consistency. These shaves were average, and the cream acted more like a soap than a cream in terms of lather and shave. The next shave improved some as I used a larger (seemingly almost wasteful) amount of cream. For the 5th shave, I used a truly disgusting amount of cream and whipped/mixed it about half as much as I did on prior attempts. Finally I generated a lather that lubricated and shaved like a cream. The disappointing part of the shave was that I nearly ran out of cream before the t/c. If I had used this much of a Taylor's cream, I would have had to break out the shop-vac to find my way out of the bathroom.

Efficacy/Quality - Overall, this is not a bad cream, but for me, it is just an average performer. It can aid you in achieving a close shave, but the lack of lubricity really makes you stay alert while shaving. I will continue to use this cream until my tube is gone, but I seriously doubt that I will buy another.
Share:
Facebook Twitter Reddit Pinterest Tumblr WhatsApp Email Share Link

As noted in the opening post, this is on the lower end of the fine grooming supply creams as far as price goes. An updated list of prices:

So far, the C&E is looking like a rather good value.

The quality of this product is what you'd expect from Crabtree & Evelyn. I feel as though this category is redundant, though, as it represents all of the underlying categories. That being said, I have given it a 10, as that is nearest the average score of the below criteria.

I own many products from the Nomad line: Deodorant, shaving soap, shaving cream, after shave, and bar soap. Clearly I like the scent. Though the nomad scent seems to vary from product to produce, the hard soap and soft soap seem to be identical with respect to fragrance. For those of you who do not know what Nomad smells like, it smells like grass. Not "I just mowed the lawn and am now covered in clippings" grass, but a much stouter, darker grass note, with some clear wooden notes on the low end. The scent is simple, timeless, and manly.

Latherability is where this cream dominates. The usual amount of soft soap is enough to produce about 20% more lather than an identical amount of Trumper's cream, and it does it in half the time. It seems to be less touchy about water mixture than other creams, that is to say, it will accept a spectrum of water to cream ratios and still be perfectly usable. I bowl lathered this cream using a C&E Super Badger Brush, 22mm knot.

This lather performs. It is slick and protective. It doesn't dry out between passes, it lubricates like uberlather, and most importantly, it allows for a very close shave. Something in their mixture seems to do an especially good job of softening facial hair, because it took me one less pass than I usually take to finish my shave. However, there is slight room for improvement, as the lather will deflate if it is left on the face for too long, more so than other creams.

Though others claim that the calming and moisturizing properties of the Nomad cream are overstated, I kindly disagree. After most shaves, before my cold rinse, my face feels stiff and unpleasant to the touch (not as felt by my fingers, but as my face feels my fingers). The calming effect of Nomad is quite nice, and leaves your skin feeling fresh and clean. Moisturization was good, as my face did not feel dry and flaky before applying toner and aftershave.

I love the Nomad packaging. Their boxes are very classy, the tubes are well decorated and have an interesting cap, and they always include a nifty little tube key with the soft soap. What is there not to like?

Quality, nice (this is subjective of course) and clear scent that stays, very good lathering ability and efficacy, together with moisturizing properties.

A highly recommended cream, albeit a bit expensive.

Nomad was a pleasant surprise - some of the above reviews led me to think it would be sub-par, but it's actually both effective and great smelling. Not too barbershoppy (either in price or scent), but a nice, widely available dip into luxury.

Price: A tad high, $15 for a tube. If you're trying to maximize your shave quality to price ratio, look elsewhere (probably to Arko's unexciting but high-performing creams).

Quality: Both the packaging and the cream are extremely high-quality. A thick, luxurious-looking metal tube that comes with an old-fashioned, ornate key to help squeeze out all the product.

Latherability: This cream tends to make very dense, low-volume lather. It's not going to fill the bowl up like Taylor's, but the volume of the lather doesn't seem to affect its performance. I noticed it drying a little on my face, but again it didn't seem to affect razor glide or comfort.

Efficacy: Top notch. No irritation whatsoever in two passes with a fresh Israeli Personna. No complaints.

Moisturizing: Neither here nor there. Not drying, but definitely not moisturizing.

Packaging: Killer, the tube key had me sold.

So if you're in the mood for a modern luxe scent and don't want to go with one of the British big three, check this one out. No way to go wrong with it.