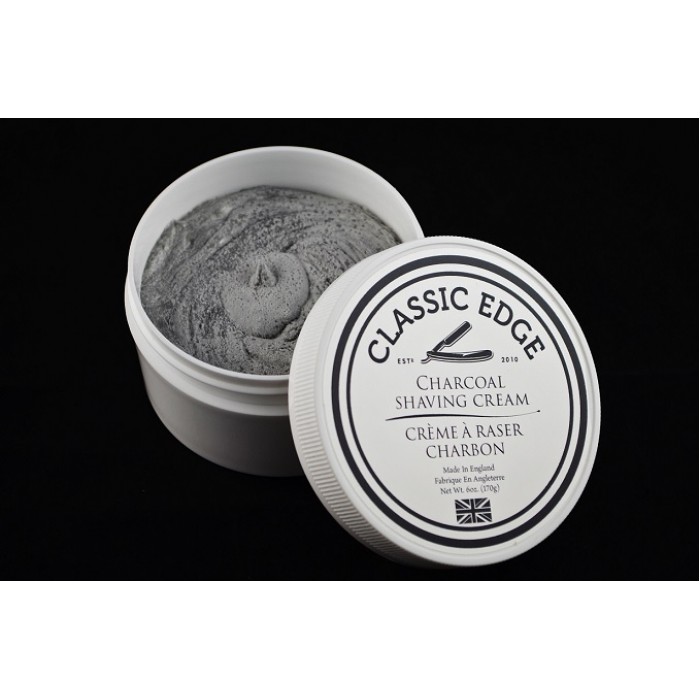 A torture test review of the Charcoal Cream - Several thumbs up. I will definitely be ordering this.

The Good: A nicely scented, workable, lubricating and cushioning cream that works in hard water.

The OK: Very thick cream takes some getting used to and brush work to spread properly.

The Bad: There is not any bad, unless you want a strongly scented cream or do not use a brush.

Would I buy it? Yes

When my first package from Classic arrived, I found that a sample of this cream had very kindly been provided. I tried it in a hasty shave one day and it worked ok, so I decided to strain test it. Calgary has some of the worst water in the country, harder than the tax man's heart, so if a cream works here, it will work anywhere. The full details are below but overall, a nicely scented, hard consistency cream that face lathers nicely with a bit of work, has decent lubrication and cushion and does not linger after the shower, so if the scent is desirable, a light application of the soap would do it nicely.

Would I use an aftershave in this scent? Yes

Consistency: Very thick cream, closer to drywall putty than toothpaste. I found the best technique was to finger spread on the chin and then brush.

Cushion: fairly heavy cushion, made a slightly thin lather that a little extra dry brushing thickened up. While shaving, I found very short strokes were necessary or the cushion would put the blade off the stubble base. Now, at three days, I should have clippered first but I wanted the worst situation possible.

Control: slightly inconsistent lubrication meant a couple of stops and slips without warning. Remember, this is the worst situation you would find yourself in, short of dry face brushing and no cream would work there. Overall, there was enough lube behind the blade that I could hold a good shallow angle without burning.

Shave Cushion: Moderately thick. I had to go back over a couple of areas that the cushion pushed the blade away enough that it left some stubble. I think when I retry it tomorrow, it won't be a problem.

Face burn: moderate. Given how much of a stress test this is, I am quite pleased with the smallish burn with the aloe block.

Rinse away: NA. I shower after shaving

Scent lingering: No. I always shower after (Zest) and it completely washed away the scent. I would use an aftershave in this scent, I like it.

The Afterwards: No lingering burn, no greasy feeling. Very nice.