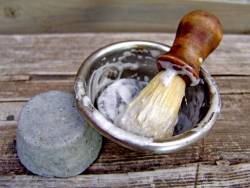 Pros: Customer Service, Idea, Price
Cons: Lathering
Let me begin by saying with my dealings with Rita were amazing, I received this product after roughly 2 weeks as it is shipped from Latvia. It comes in a nice wax bag packaging with a picture of a goat, it is primarily in Latvian which was cool for a nerd like me.

I had high expectations for this soap, I liked the idea of a black clay soap that would detox and clean my face as I shaved. The soap did not perform to my standards, I felt when lathering on the puck I had enough soap to begin a face lather, when I tried to face lather all I would get was a frothy foam on my face. It did not give enough cushioning for a shave with my iKon D1 Slant Blade. I had to call it quits after two passes as it just began to hurt. I think that this soap has potential, a lot of potential actually it just cannot form a good enough lather for me to shave. I do need to point out though THIS IS MY FIRST BLACK CLAY SOAP, I might be ignorant when it comes to knowing how to shave with a Black Clay type of soap but from my knowledge of shaving and lather producing I was not impressed. I did notice one thing though after multiple attempts at beginning a lather and that is my skin felt hydrated, more so then before. I think that there are a lot of benefits in this soap, antioxidants etc... all it needs is a little bit of help on lathering and this soap will be a great addition to any shavers soap collection.