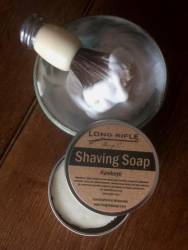 Pros: Easy to load, very good lathering ability, has a lot of cushion while shaving.
Cons: None
I had the pleasure of using two of their soaps: Leatherstocking and Hawkeye.
Both of these soaps acted the same when put through their paces with different types of brushes so this will be a combined review for both except when speaking about scents as they differ.

For this shave I had a week and a half of facial hair growth, I used a new Feather blade with a Phoenix DOC Safety Razor.

Let me first off and say my communication with the owner of Long Rifle Soaps was beyond what someone could imagine. I had the great privilege of speaking to their owner and manufacturer. This is a small town America company. This soap is the work of human hands and really it is amazing to see this soap out perform a lot of mass companies.

When I first received the soap it came in a manila folder with two letters inside both on a brown piece of paper which for me was a very nice touch. The owner (Amanda) sent a letter thanking me for reviewing her soaps along with of shipping paper and a small business card. The soaps come in a tin that has a plastic wrap around it so you can see if it was tampered with.

When you open up the soap get prepared for a very strong masculine scent, the Hawkeye scent had as advertised a lavender scent with again a subtle citrus hint most noticeable after the shave but also obvious with just smelling the soap. Another great addition in my eyes is that the company logo is stamped into the soap. It adds a very genuine touch to it and I am very glad Amanda did that.

Lathering of this soap could not have been better for me, I am used to blooming my soap and brush and knocking out some water of the brush and whipping up an effective lather, and guess what? That's all you need to do with this soap. This soap it is harder not to lather then to lather. I put it through its paces with all my brushes trying to get it not to form into an amazing thick lather and that just wasn't possible, the best I could do was make it have to be worked for another 20 seconds and that lather started to build. Peaks were beautiful, this soap does not have a problem when it came to my peak test and I was actually very surprised that it out performed some very well-known soaps. What I did not try and I don't think anyone does this anyways but it's worth mentioning: I did not use a completely dry brush on a completely dry puck. It's not something I think anyone does, so I didn't try it.
Brushes used were: an Omega 46065 boar brush, a 30mm knot Whipped Dog High Mountain Badger brush, an Esccali badger brush, and an Omega Synthetic brush. Once again my best results were with the Omega 46065 and the 30mm Whipped Dog brush.

With using a Feather Blade and a more aggressive shaving method I wanted to put this soap's cushion ability to the test and boy did it pass. I tried all sorts of new shaving angles trying to get some irritation. I do usually get irritation under my chin and to no surprise I got a bit of irritation. If I were to have used this soap for a normal (not a super aggressive shave) I don't think this would have happened because of how minor of an irritation it is.

My one complaint is that I am not usually a big fan of the puck not filling the whole bottom of the tin, I find sometimes can be annoying especially on your first shave to have it hit the side of the tin. I understand that it is a 3 ounce puck and that’s the size of the puck, but I am really looking at this point for a reason to find something wrong with the soap because I just can't find anything wrong with its lathering ability and its overall shaving ability.

I asked Amanda for a little bit of information about her company and this is what she sent about The Long Rifle Soap Company:

"We are a two-year old company based in Green Bay, Wisconsin, and started after I left a 15-year public relations job that was mostly crisis management. I crashed and burned. Started the company while I was job hunting. We have bee hives, and my husband asked what we could do with the bees, and brought up soap. We don't have beeswax in our soap, but it got me thinking how the soaps I had seen at retailers and markets didn't fit my scent profile, and men were an ignored market.

Our name comes from wanting a masculine brand (although our scents are mostly unisex), and the fact my husband and I are history buffs (we met in Washington, DC, and reveled in the history), and he is a hunter and an Army vet. A friend of mine designed the logo and nailed it.

We did a lot of research before diving in. I ran around town trying to find oils and butters to make our first batch of soap, which we used a drawer from an old card catalog. No scent, and it was orange from the red palm oil we used. It actually turned out. We experimented with different formulas, and found one that was long-lasting and didn't use palm (there are environmental issues around harvesting palm oil). We use locally-sourced organic tallow and unrefined shea butter. Scents are mostly essential oils, but there are some fragrance oils added.

Our next line was beard oil, followed by mustache wax, and then the shaving soap. We use human guinea pigs to test our product and also rely on customer feedback. We are working on aftershave and hope to be rolling that out before the holidays."

Let me just say that not only should you be looking at this soap because of its amazing ability for a shave, but you are also supporting a small business. Long Rifle Soap Company offers EVERYTHING you and I need in a soap. It is at such a reasonable price and will give you an amazing shave time and time again.

This will go down as one of my favorite soaps, and for sure a soap I will be using often.