So I seem to have a hard time with blade longevity. I think it is due to a combination of hard water and tough stubble. Does anyone have recommendations for sharp blades that I can wipe dry/palm strop (as opposed to "pat dry only" ) with alcohol without ruining the coatings? Thanks!

The "pat dry only" is simply a legal disclaimer so you can't file a claim against the company for not warning you that the blade is sharp.
The coatings on the blade are gone before the end of the first shave.

The "pat dry only" is simply a legal disclaimer so you can't file a claim against the company for not warning you that the blade is sharp.
The coatings on the blade are gone before the end of the first shave.
Click to expand...

Same with the "do not wipe blade". Just so you don't cut yourself and rub off the coating. But once you've used the blade the coating is gone.

What about air drying?

Gillette did a bunch of research decades ago. Most of the blade dulling comes from corrosion.

Costing the blade in an inhibitor, much like is recommended for straights, is probably useful. Baby oil comes to mind.

Gillette actually mentions a few times in their old razor instructions not to wipe the blades because it can dull them.

As far as I can tell the phrase "do not wipe" first appears in the early 1960s, possibly on Schick blades. The Schick packs below show a pretty early version with "DO NOT WIPE" - and a slightly later version without. According to at least one Schick patents, the earliest coatings were easily damaged. 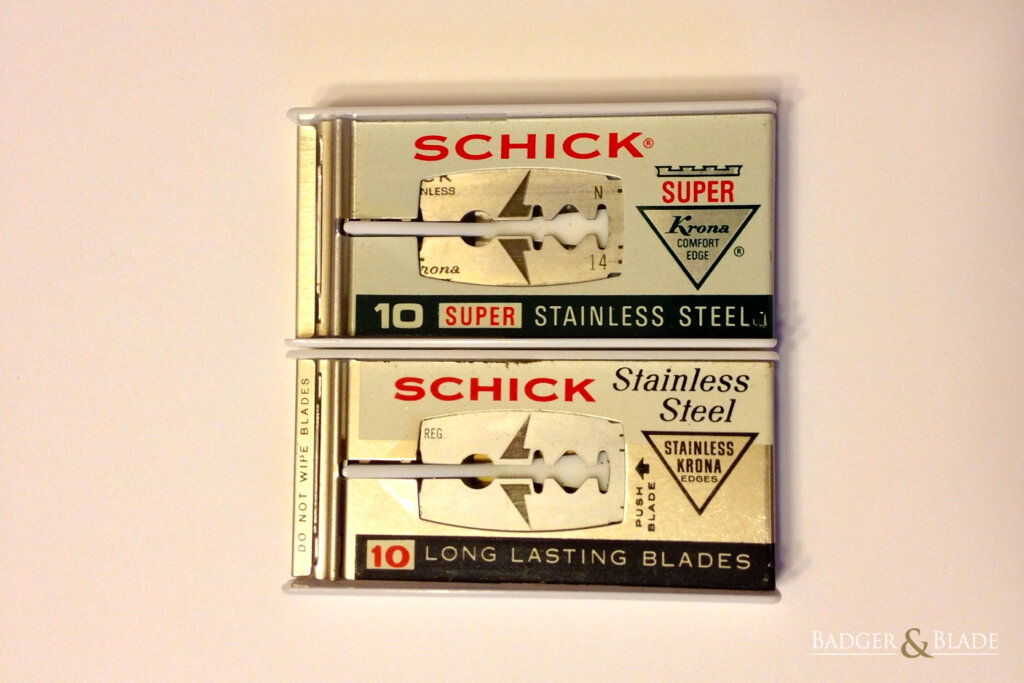 Corking is somewhat similar to wiping, but probably harder on any coatings. Here are some before and after images, showing what corking did to a drugstore Personna blade when I tried it. I presume the dark band is sintered PTFE.

However this may only affect the appearance of the coating. Various 1960s-era Gillette and Schick patents claimed that PTFE coatings would reduce force to cut (FTC) for several shaves. One patent speculated that sintering process might chemically bond the ends of the PTFE chains to the blade. If so it would make sense that wiping off the surface of the coating would not completely negate the reduction in FTC.

If I plan to use a blade more than 2-4 times, I jeans-strop it. That is fairly similar to wiping, except that I do not remove the blade from the razor so I only "wipe" one side of each edge. It seems to roughly double the number of shaves I can get from a top-tier blades: for example GSBs or some vintage blades. Other blades do not seem to benefit: for example Astras or Lords.
Last edited by a moderator: Feb 8, 2017
You must log in or register to reply here.

L
What Are the Differences Between Derby Extra and Premium DE Blades?