This is President's Day weekend so I thought it appropriate to have a pie-themed pif. The winner of this pif will receive an Omega 10077 boar brush, a tub of Apricot Pie, a tallow-based wonderfully scented & performing soap made exclusively for Pasteur Pharmacy by Master Soap Creation. This soap has been donated by Pasteur Pharmacy for this pif. I shared how generous Pasteur Pharmacy was in this earlier thread. And to round out the pif, I'll be including a 5 pack of Personna Comfort Coated blades.

Anyone with 25 quality posts can enter who hasn't won another pif in the past 6 months (my monthly Newbie Razor Blade pif excluded).
CONUS only, please.
The winner agrees to not sell or trade any of the items they win. If the winner doesn’t like any of the items, they can only give them away (pif it themselves).

To enter, do two things:
1) Say "I'm in"
2) Write something about pie. It can be a story about your favorite pie or your least favorite pie. You can write a family-friendly poem, limerick, haiku, or just a rhyme!

I'll let this go a week, or so, then pick my favorite entries to be finalists. I'll then let a random number generator pick the winner from the finalists.

So get your forks ready. On your mark, get set, eat pie! 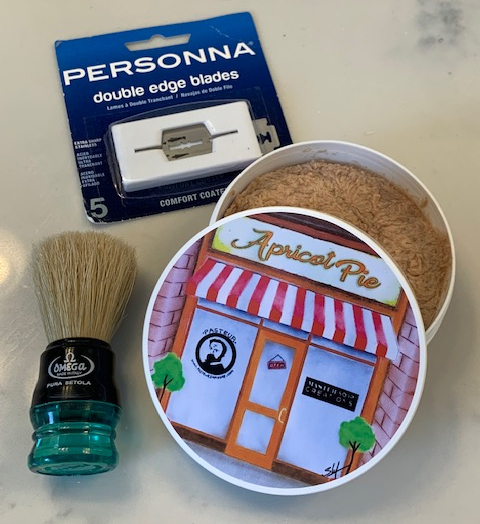 My favorite pie story is my wife's grandmother always made rhubarb pie from scratch using the rhubarb from her garden. Ever since my wife was little, she loved eating rhubarb pie at her grandmother's house.

Unfortunately, a few years ago she could no longer stay in her house and went into a nursing home (her husband having passed away the year before). Sadly she passed away not long after.

While we were clearing out her house (which was very sad btw), I was outside where the garden was. It was unrecognizable since it hadn't been taken care of in a few years. Lots of grass and weeds everywhere. However, I noticed a very small stalk of rhubarb under all of that. I called my wife over and we pulled a piece of what was still alive out which wasn't much at all, and took it home.

My wife put it into a small glass jar and hoped it would sprout roots. After a week or so, it did just that. After a few more weeks, we were able to plant it outside but it was late in the year and winter was around the corner. We were concerned it wouldn't make it over the winter and we would lose it and the link to her grandmother's pie.

Flash forward 4 months and 12 feet of snow later and ... yup it made it! My wife was ecstatic!

That was 3 years ago. We harvest a lot of rhubarb from that plant and my young daughters make my wife rhubarb pie every year (from scratch) on Mothers day.
Last edited: Feb 19, 2022

Got lucky with dead badgers

My pie story goes like this. When I was in college there were a couple of guys who were always pulling pranks on one of my female friends. She was getting tired of it, and she knew my brother and I were pranksters as well, so she decided she should fight fire with fire. So she asked us to help her get back at them.
She convinced them she was holding a pie party at her apartment. The idea was that everybody would bring a pie. Then we would play some games and then eat pie. My brother and I brought cream pies.
We played some games and then the time came for 'eating pie.' My brother and I had our cream pies out and on the table in front of us. We were at the head and foot of the table and she made sure that they sat catty corner to us.
We started talking about pie and then my brother said, 'do you guys like cream pie?' One of them said 'yeah' and then we both simultaneously gave them a pie right in their faces! The timing was perfect.
I had seen lots of people get a pie in the face on tv or in the movies, but never before in person. Nothing can prepare you for how funny it is when you see it in person. We couldn't stop laughing for the next ten minutes.
M

Here’s my story. We work overseas a lot and whenever we get back to the US there is an elderly neighbor that will bring us a pie. But she doesn’t bring it for our family of 5. She always asks for me. My wife will answer the door and this neighbor always says, “I brought Michael a pie.”

. Makes my wife roll her eyes.

My favorites from her are buttermilk and pecan.

Very generous PIF, David!
Respectfully, not in but I love all types of pie.

I’m in.
When I was a teenager, I worked as a counselor at a summer day camp. There was a pie-eating contest one day...with cherry pies...my favorite kind of pie. So, of course, I entered. I didn’t win, but I never went near cherry pie again. Sad.

Not in as I have enough shaving gear… and on a diet, so no pie!

I'm in. Remember my mothers lemon pie, no other comes close.....

Nice! Not in as your last PIF inspired me to buy my own boar, an Omega 10066, and I've already got a sample of that soap. The dog usually runs from all my new soaps but actually tried to lick that one!

I'm not much of a pie person, however, being a Southerner I make a killer peach cobbler. Sprinkle some cinnamon on top and grab a glass of milk. I think I'll make one tomorrow.

I’m reminded of the pie eating contest in the movie Stand By Me.

Anyway, in my senior year of high school, I was the president of my school's multicultural club. For one night (from 5pm to 10pm) every year, our club would put on a festival where the various cultural groups would have a stall (where the club members served food). Additionally, there was a main stage where each group would put on a performance of some sort.

There was usually a variety of fantastically delicious delicacies at the festival. The festival goers (including the various culture group members who manned the stalls) generally managed make the rounds and to fill up on the assorted great food either made by club members (or their family) or purchased from local (culture-appropriate) restaurants.

As president of the club, I spent the night running around between groups/stalls during the festival to help troubleshoot any issues and MCing the stage performances. However, this also meant I was too busy to get anything to eat for myself. As it was getting close to the end of the night, I was ravenous (my friends and even my girlfriend had all assumed I'd been eating so none of them got me anything to eat) but the stalls were now out of food.

Fortunately, one of the last performances of the night was held by the the USA group,* which held a pie eating contest. The group asked for volunteers to participate in a public display of gluttony. I happily (and quite literally) jumped at the chance!

The rules were simple, we would each be given a pie which we would have to eat with our hands behind our backs as soon as we heard "Go!;" the first participant to finish would be the winner. Since I was starving and didn't embarrass easily, as soon as I heard "Go!" I face-planted in the blueberry pastry; only coming up occasionally for air. I ate so quickly and recklessly, I had to snort down a blueberry that wound up my nostril. Before I knew it, I was out of pie!

With my face covered in blue syrup and bits of piecrust and blueberries, I sat up to complain about being out of pie. I was then told I had won. But all I could think of was "I want more pie! I'm still hungry dang it!"

*Yes, the US has a culture. Heck, it's arguable there's many cultures in the US.

As an aside, I also love apricots! We had an apricot tree in our front yard when I was a boy. I learned to climb a tree on it. Every summer, it bore delicious fruit! The apricots were slightly smaller than tennis balls but they were also much sweeter than what's sold in supermarkets (and even farmer's markets).
Last edited: Feb 23, 2022

Thank you for the stories, I enjoyed reading them. The winner of this pif is @carluchi. Send me a PM with your mailing info & your winnings will be on their way to you! And a special thanks to Pasteur Pharmacy for donating the Apricot Pie soap.

I will post my thoughts on the new soap as well.

Congrats to the winner!

Just a followup on my review of the soap ..

carluchi said:
Just a followup on my review of the soap ..

Congrats to @carluchi on yet another fabulous PIF by @dmshaver
Don't forget about that brush.
While I am still getting accustomed to using boar, that Omega 10077 is quite a surprising little firecracker of a brush once it breaks in...
You must log in or register to reply here.

GIVEAWAY! PIF No.2 for Those Who Are Serious About Getting Into Straight Razor Shaving - Not CONUS or Canada
2