Unused sides of a stone should be lacquered?

Hi Gentlemans,
I've heard a lot and read a lot, but I'm still not sure if unused sides of my Ozuku and naguras should be lacquered?
Alternatively, what varnish to use? I have heard that it is possible to use ordinary nail polish from a drugstore or from my wife without any problems.
Please advise. Thanks a lot.

Moderator Emeritus
I’m not the biggest Jnat expert, but on mine, and on the natural slates I have been experimenting with, I’ve been using a slate floor sealer I found, three coats, which seems purpose made for the job. Might use something a bit less indestructible on a nagura, however. 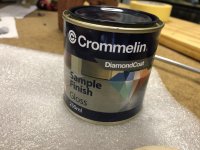 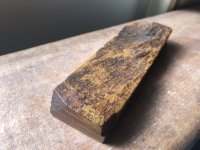 Legion said:
I’m not the biggest Jnat expert, but on mine, and on the natural slates I have been experimenting with, I’ve been using a slate floor sealer I found, three coats, which seems purpose made for the job. Might use something a bit less indestructible on a nagura, however.

That looks nice, and well done!

Clear, colourless, gloss, oil-based varnish is what I’ve been recommended by someone who sells jnats. (I think he used to use CL, but has changed to this now because he thought just as good, and cheaper).

I’ve sealed a few stones with it, and seems to work great. Though perhaps if you’ve got the type of insanely hard, fine Ozuku then it may not need... (?)
L

Clear nail polish is a synthetic lacquer but will work. Traditionally a Japanese lacquer, (Urushi) made from tree sap, was used, but hard and pricy to get outside of Japan.

The goal is to seal the stone, so water does not penetrate into cracks and separate the layers of stone. Any thing that will seal the stone will work.

I use craft store clear water-based varnish, it is cheap, easy to find and dries quickly, it can also be tinted to replicate a Urushi finish.

About half of my stones are sealed, does not seem to make much of a difference.

Thank you all for your answers. I was in a hobby market now and I didn't buy anything, so many options

So should I buy varnish for wood or iron? water dilutable? something like floor varnish? Thanks

I usually use either cashew (hard to get lately) or marine spar varnish, usually the Minwax Helmsman brand.

Ideally, you are not looking to create a 'candy shell' - like on an M&M. Traditionally, the concept involves using a sealer that penetrates into the stone a bit, usually starting with very thin coats, and then building up slowly to thicker coats. The early work develops under the stone's surface, and adds strength, the later coats build on that and add more water resistance. The sealer will flow into tiny crevices and cracks, and then dry; so it should be a dimensionally stable product. You don't want it to swell or shrink. It should have some sort of adhesive quality to it. It's also advisable to use a product that is reversible, repairable, etc. The last thing is the tactile quality it adds, there should be a good 'grippy-ness' when wet, not slick.
In the absence of Japanese Cashew Lacquer, which seems to be a near perfect product for this, clear nail polish is my 2nd choice.
Urushi is nice, lovely actually, but a royal pita to use, and somewhat toxic until cured, and occasionally still a bit of an irritant after its cured. I usually direct people to use clear Nail Polish, it's cheap, applies easy, thins down well, cures right, and cures in like 15 minutes. Doesn't stink too bad either. Cashew is quite a smelly product.
Another more modern choice that is even better than all of the above is Paraloid, but it's not simple to deal with.
You must log in or register to reply here.