Took a chance on an inexpensive soap... (Viking Revolution)

I had a hankering for a mass-market glycerin soap in the same vein as VdH and Col. Conk. I wanted to revisit some of the first soaps I ever tried to see if they were really all that bad. I was going to grab the variety pack of Col. Conk from the big river store, but instead I happened upon this set of Viking Revolution glycerin soaps and couldn't resist the purchase. 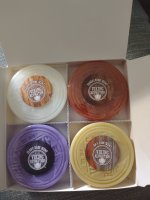 I got the four-pack of the Viking Revolution soaps for about $15 all told. I decided to test out the Bay Rum soap first because I really liked the strong, clove-like scent. It fits nicely in my OS mug with no need for melting. 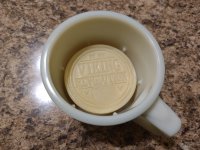 I wasn't expecting much at all from these (I figured I'd use them in the shower if they were REALLY bad) but the result is... pretty okay! Faint praise, I know; these were never going to compare to high-end artisan soaps or the old standbys, but I don't really have anything to complain about with the soap, especially given the price I paid. 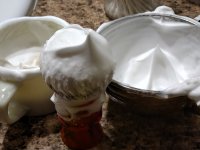 Scent strength is strong while lathering/shaving but does not stick around. The lather is very decent and easy to build provided you load enough soap; I usually face lather but I found it easy to get a good lather in a bowl for the picture with my Yaqi 2-band. Slickness is quite acceptable for the shave but nothing totally amazing. As for the post shave, my skin feels just slightly dry, but I count that as a positive given my oily skin complexion.

The best part for me is that the Bay Rum scent doesn't burn my face! I'm usually sensitive to "spicy" scents but this one doesn't bother me a bit. Based on the ingredients, the only fragrance agent for the Bay Rum soap is bay leaf oil.

Overall, I think the Viking Revolution soaps are worth taking a chance on especially if you like Col. Conk or other glycerin soaps. All the other scents smell good in the wrappers, but I haven't tried them out yet.

Has anyone else tried these out?

Contributor
Ambassador
My son bought me these for Christmas. They are pretty good! Lather well, the scents are nice and they are perfectly sized for travel IMO. Inexpensive as well.

I've seen these on Amazon and they look and sound cool but I've been burned by buying unknown soaps before, on the other hand some Etsy soaps have turned out to be quite good Adiago Road being one of them that has good ingredients and was very good for a unknown soap on the forums. Checking the ingredients first is always a good idea since they can give you an idea as to how the performance would be.

I remember seeing these under $10 on Amazon. I didn't pull the trigger because I had a negative experience with Vikings Revolution sandalwood cream. The scent was not to my liking and I suspect it's a rebranding of a Chinese cream that is sold on AliExpress.
A

funny this thread has come up......I have a puck of sandalwood that I'm going to try tomorrow for the first time, to be honest, I'm really excited.

I got a 4 pack for Christmas as well, and I used the Bay Rum as a body soap in the shower. I've never had a Bay Rum shaving soap, so this winter might be my dance with the bay rum soap devil. I love bay rum aftershave.......so there's a good chance I'll bang through a puck of something.

Col Conk bay rum was calling my name to be honest as well as Moon Dance soap, we will have to see!
Last edited: Aug 30, 2021

Awesome @andromeda673 , I hope you like it! I'm still working on my Bay Rum puck and I'm still liking it pretty well.

It's definitely not a top tier soap for me but it's still a good one.
You must log in or register to reply here.