To start the Labor Day week off (while at work)

The brush is a Rooney Style 2 small Silvertip.

Have a nice week all of you

After 2 Derby Extra blades I tried a Swedish Gillette again. The blade itself felt a big "rough" on my face but I'm not sure whether this relates to the blade, the shaving cream or a less good prep. The result was in fact a very enjoyable and rather BBS shave, although that initial rough blade feeling made me feel less comfortable compared to a Derby Extra.
C

no doubt about it, the American Palmolive is different from its European counterpart.

Richard, my European Palmolive is from England. I see your Sensitive version is from Romania. Mine is the "Classic", is the one you have any good?

This Oregon Soap Co. is bar none the best bar soap I have ever used. This soap will be replacing my Nancy Boy bars, and the NB face cleanser!

Yeah, I'm at work too. Hello America in the 21st century.

crackstar said:
Richard, my European Palmolive is from England. I see your Sensitive version is from Romania. Mine is the "Classic", is the one you have any good?

It's not bad actually. The first shave I had with it a few weeks ago wasn't that great. I shaved with it again today and used more cream and more water. I had a great shave with it. It has a lovely scent. It seems there are many Palmolives, this one has aloe.
C

Richard, I used the American Palmolive, which is good also, but somehow, I think I prefer the European version, you know, the one I was telling you that I have. I have another Palmolive from Italy which is mentholated. That one is pretty good also, but the moisturization is not quite as good as the other 2 that I have. My parents who live in Florida want to send me some more of the American stuff, but I told them not to. 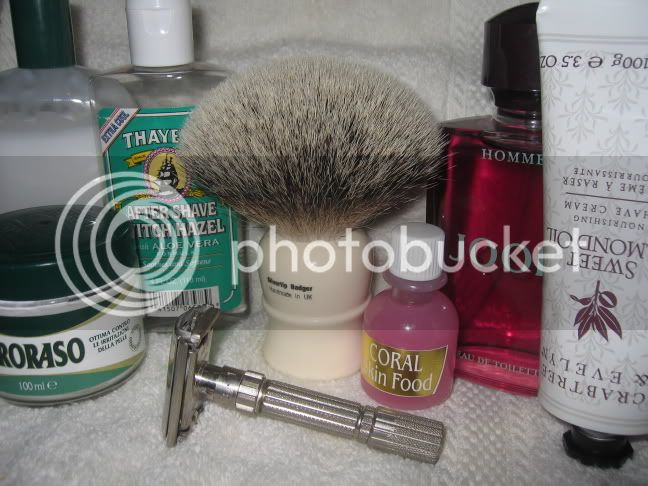 S
Sudden and Constant Redness of Face After Shaving