This action is neither stropping, or sharpening.

At best this rubbing of the edge on a piece of denim is cleaning dirt, and debris from one side of the blade edge: fairly ineffective, and I would expect any improvement to be very minimal.
G

I used to do it, got tired of it. Even if it did make a dif. I'd say other things like lather, brush, technique make more.

And, blades are cheap F it! Takes too much time; I'm so lazy I only use TTOs now.

Okay, sure, you can strop a straight on denim. Or a DE or SE blade, FWIW. But someone please explain how you can strop a cart? You can only hit one side of the bevel! HELLOOOO! All you will be doing is cleaning up one side of the edge, possibly sending a micro-burr inward to the "dark side" of the blade. I say the benefit, the ACTUAL benefit, is very slight. That is, not counting any placebo effect. Am I the Master of the Obvious, here? The Emperor isn't wearing any new clothes. He is NEKKID!

Go West Young Man said:
It's the same as palm-stropping - cleans up the edge, removes small dirt particles and imperfections, probably gives you a bit of benefit but no-where near what people claim. If you think it doubles your blade life, what you really mean is that you've learned to accept lousy shaves as normal.
Click to expand...

Yup. But blades are cheap...

I tried it and didn't notice any difference in blade longevity, but my jeans are now BBS, so that's a plus.

smalltank said:
...and pull your jeabs tight on a chair for example..works IMO
Click to expand...

Sounds like that hurts! I am not pulling any jeabs!

cb91710 said:
Remember, with a straight, you are stropping it with the edge and the spine on the strop... somewhere around 15-18 degrees.
Click to expand...

I learn something new all the time here. didnt know the spine and edge both are in contact while stropping, makes perfect sense now

I was doing this with carts just before I switched to DEs. Except I was just basically drying the blades on a hand towel. I could get about three weeks of decent shaves if I shaved every other day. I think this is all that the jean "stropping" really accomplishes. I would imagine letting the water sit on the blades leaves deposits of stuff - hair, dirt, soap, minerals, etc. Anybody remember the thread a month or two ago about the guy who used the shower cleaner to extend the life of his Fusion carts to one month? It was basically just a rinse aid that made the water sheet off of the blades and leave them clean and dry.

Like others have pointed out, you can't really strop a blade if you're only hitting one side of it.

TonyJoe said:
Anybody remember the thread a month or two ago about the guy who used the shower cleaner to extend the life of his Fusion carts to one month?
Click to expand...

The problem is, this is a sample of one user, and likely one, maybe two blades.

I used the Fusion for my headshave before returning to the M3. I find that I could get more shaves from the Fusion than the M3, and I encountered SOME Fusion blades that lasted quite some time.
The problem is, some blades didn't. Whether it was the blade, or being careless, I would sometimes get some burn or a nick during my 2nd week on a blade. I just decided that I'd change the cart every Sunday night whether it needed it or not, because I could ALWAYS get 7 shaves from a cart.
But you can easily push it, and if I were the kind of guy who only did one WTG pass and maybe an XTG followup, I could quite easily get a month out of a Fusion without doing anything more than rinsing it under the shower head and putting it back into it's case on the shelf in the shower enclosure.

So yes... your mileage will vary, and take many claims with a grain of salt. We've had similar claims of magnets keeping blades sharp.

wulfgar1976 said:
I strop my blades on my face while I am shaving with them. I'm sure I get more shaves out of them than if I didn't shave
Click to expand...

I use my palm on Fusion blades and yes they do shave much better. Maybe it cleans I don't know but I know it works. Just for the hell of it I'm going to se e how long one Fusion blade lasts.

I use a glass dish with a bead of water to keep in-use blades sharp. when I began shaving in 1968, dad showed me product he used during WWII to make his blade last longer. The product was a glass bowl/tray that sloped downward. He would put a bead of water on the glass area and rub the blade back and forth.

BobbyB said:
I use a glass dish with a bead of water to keep in-use blades sharp. when I began shaving in 1968, dad showed me product he used during WWII to make his blade last longer. The product was a glass bowl/tray that sloped downward. He would put a bead of water on the glass area and rub the blade back and forth.
Click to expand... 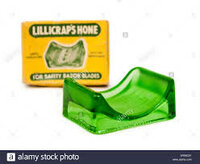 Sounds a bit like the new age hippy thing with pyramids. Remember them? A four sided pyramid aligned north and south could be used for meditation, keeping food fresh and also keep razor blades sharp. I can vaguely remember my Father making a little pyramid out of cardboard in the 1970's and putting his DE blade in it each day and he reckoned he got loads more shaves out of it. I think those things went the way of corduroy, lava lamps and negative ion generators.
cheers
Andrew

That is it! I would love to find one today.

I tried it out on a pair of the missus's jeans last night. She wasn't too happy this morning.

And take yer jeans off first.

Contributor
Jeans are a greasy way to learn to strop a straight razor. Just strop a butter knife on your leg while watching TV until you habituate the motion.
You must log in or register to reply here.

G
Can you re sharpen de safety razors blades