Luckiest Find in the Wild

If you are like me, I get more excitement over finding razors in the wild (antique stores, flea markets, etc.) than I do bidding on ebay.

My best day was going back to a local antique store to pick up two razors that I had passed on a couple of days earlier. They were both Slim Adjustables. One was a cased gold Aristocrat and the other was a regular Slim. I had seen them, but I was not yet that versed on razors. The Aristocrat had a good bit of soap scum, and I just said, "I'll pass." Well, I thought better of it a few days later and went back. The store charged me $30 for both of them. The lucky part was that as I was checking out I looked down and saw the tip of some straight razor scales and the word "Gold." The case was a mess, and this razor was all but invisible. I don't know why I saw it. I asked the cashier to show it to me, and it was a Dubl Duck Gold Edge, which she sold to me for $20.

I left that store $50 poorer, but in possession of the razors you see below. The Dubl Duck is in its restored state, and the Slims are as I found them after a bit of polishing. That was a good day.

What is your best day in the wild? 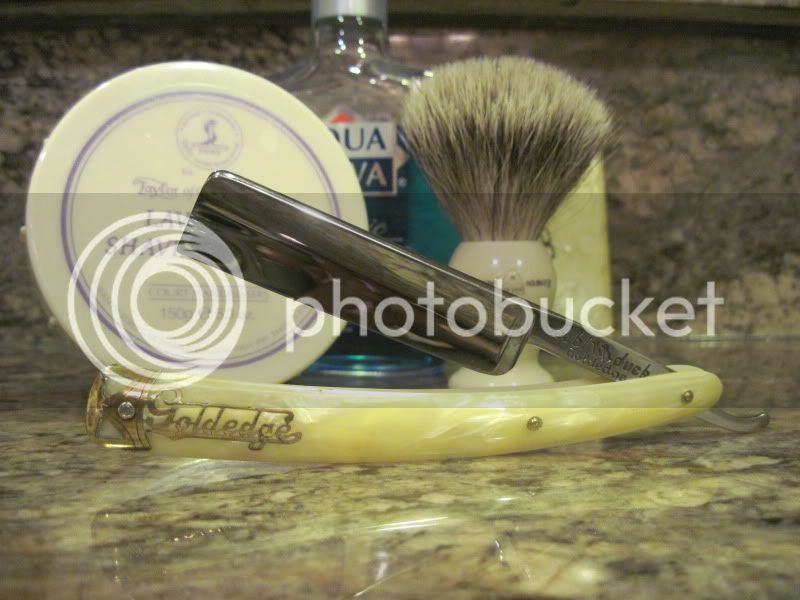 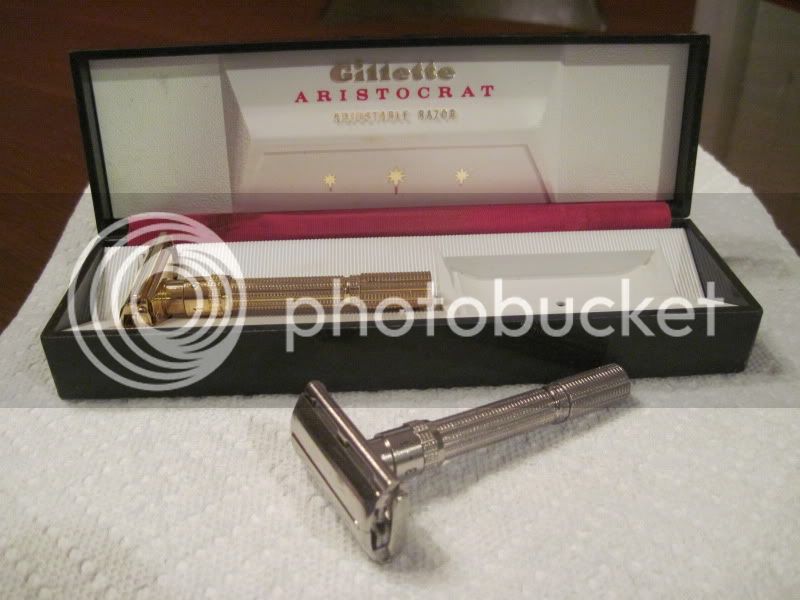 I had one of those magical days last fall, where I stopped on my way home from work at a shop Id been in couple times before and was lucky enough to find a 1947 Super Speed in great shape for $5,00...great day so far. Walked down the block to another shop I had always meant to check out. Gave the place a pretty good going over, even got down on all fours a few times and got out a small flashlight that I use on dark display cases.nothing. Well I circled back around to an area that had been a little too crowded my first pass through. This area had tall stacks of plates and bowels and the like and did not look all that promising anyway. Well to my surprise on one of the tables was a case for a gold toggle marked $12.00. I think I whispered to myself sold as I picked it upbut wait.it feels a bit heavy for just a casewow the razor is in there. Well after paying I tried real hard not to do back flips all the way to the car. Could not have had a better day I was thinking to myself later at home while I was checking the toggle case out.as I pulled the platform for the razor out..out fall the instructions.
L

Wow, what a find!

I'd love to find a vintage strait that could be restored to look that good.

Who did the restore on the straight? What did the scale look like when you bought it? How about the blade? How did you get so lucky?

This is what it looked like pre-restoration. Not bad. The scales were fine, no cracks or warping, and the blade needed honing and polishing.

Bob Keyes did the restoration, and he did a phenomenal job. I also had him do a Dubl Duck Special No. 1 which came out great too.

I have no idea how I got so lucky. The case the straight was in was a glass case full of junk and I just happened to spy the tip of the scale like I said. I might have used up all my luck, because it's been a desert since then. I still keep poking around and searching for new antique stores anytime I get a chance.

Copierguy, how sweet is that Toggle find?! Awesome! 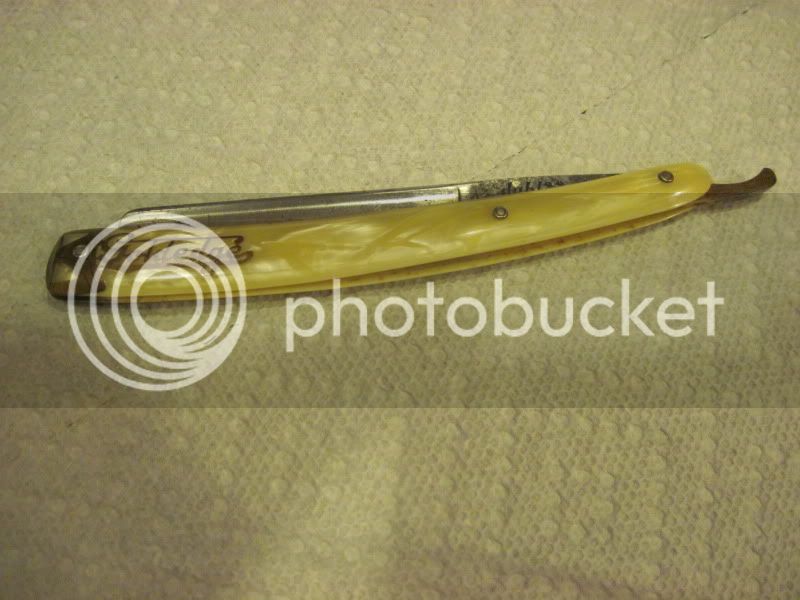 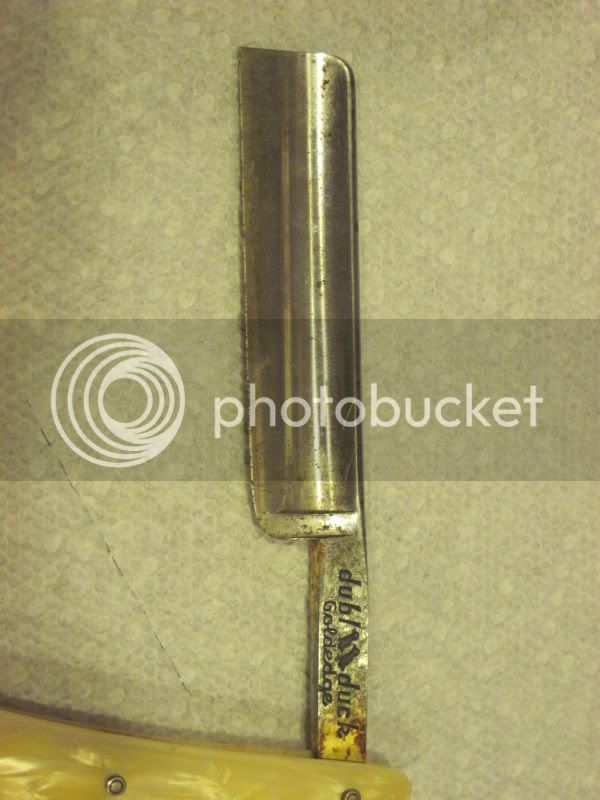 You're a lucky guy!! Congrats

I wish I could find something like that where I live. Nice score.
we only have 2 antique shops and I'm very familiar with what they have.

Ooooh, I remember your post about that. You found them NOS at an estate sale right? I think I Googled "President Razor" the other day, and your thread was one of the results.

Nice score. I've long ago exhausted the supply of all the local antique stores and malls. Haven't seen anything that nice for a long time. I, too, get much more excited finding things at antique shops and flea markets than I do finding them on ebay. It's like the difference between hunting in the wild, and hunting on a game farm.

Copierguy said:
. . . Well I circled back around to an area that had been a little too crowded my first pass through. This area had tall stacks of plates and bowels and the like and did not look all that promising anyway. . . .
Click to expand...

Lucky you! The antique malls around here never have any bowels.

Just came back from an antique store in Orono (no, they didn't have any bowels). But they did have some sort of frankenrazor, a gold razor with a long ball-end handle, too long to fit in the box (maybe the razor was ok, but in the wrong box?)
Anyway, did you know the handle comes apart?! Both the ball-end and the threaded end just pull out of the main part of the handle! Presumably it is originally just a tight press fit. Useful to know if you want to replate, or even just clean thoroughly.
T

A gunked up Fatboy at an antique store for $15 with a case and blades. Cleaned up to excellent shape. Quite a find for me.

This was a very sweet find, congrats I am green with envy!!!
R

Bought all this from a lady for $50. It belonged to her grandfather. 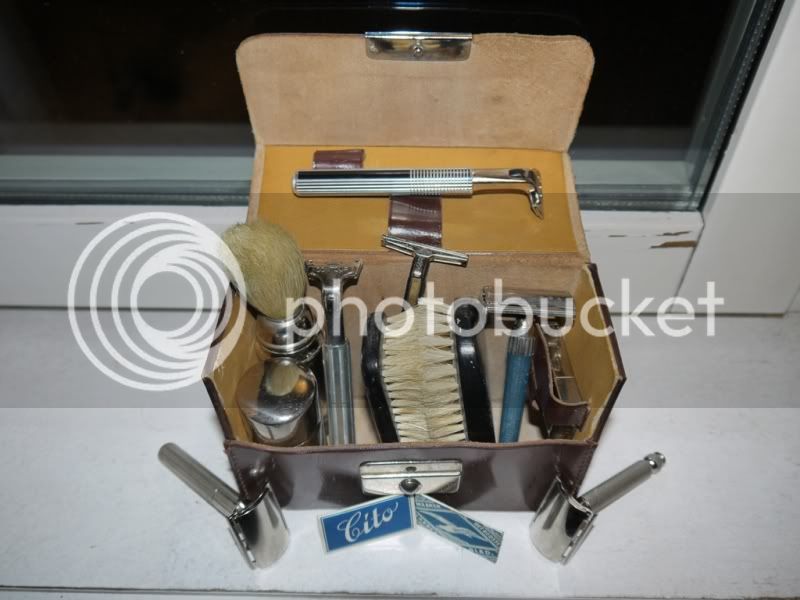 I can't believe that AliExpress sells a DE razor for .66 cents!
2

My Gillette Slim arrived! Thank you @airmech for your kindness. Review of first shave.