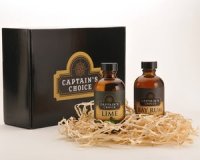 Enter to have a chance to win an Aftershave Gift Set - a $41.00 value! The lucky winner will choose any two of the Captain's Choice aftershaves to go into the gift set. OR you can choose any two of the popular shave balms. OR you can choose an aftershave AND a balm - how about that! And don't forget, The Captain just LOVES to include some free samples for you.

To enter, simply tell us a memorable birthday you had. The winner will be drawn in a few days by random.org.

Good luck to all of you!

I'm sorry, what did you say? Can you repeat that for me? Oh, what else you ask? WELL! The Captain almost forgot - there will be a second place winner and a THIRD place winner. They will get to choose a free bottle of aftershave of their choice.

This is CONUS only please.
P

I'm in. For me one of my memorable birthdays was when I was growing up in the remote depths of Africa and being happily surprised with some Lego Technic sets.

I'm in, my most memorable birthday was when I turned 41, this was my first birthday as a father.

Moderator Emeritus
Back in the mid 1960s, I went with my Dad one night to a Denver police station a cousin of his worked at. He had found a S&W Model 29, 7 5/8 barrel, presentation walnut box. This was prior to Dirty Harry and the Model 29 was not a popular gun outside of a select few. The cousin had found this one at a Texas dealer and had it shipped up for Dad, who was applying to the Denver PD at the time. I grew up frequently shooting that gun, one of the few I could shoot accurately. As I grew older and Dad started piecing his guns out to us kids, I always tried to sneak the S&W out and it got to where he wouldn't leave the safe open when I was over. A couple years ago he called on my b-day and invited me over for lunch. Sitting at my place was a walnut box, the rest is history. Still shoot that darn thing better than any other handgun, and I was a Deputy Sheriff for many years and shoot a 1911 well, but not like that Smith.

Contributor
I'm in. One of my most memorable birthdays was my 8th. My entire class was over at my house and my mom organized games and there were lots of presents.

Contributor
I'm in. But we have a problem. I don't remember a single birthday I ever had. Weird.

Fantastic giveaway. I'm not into aftershaves, but if they are as good as your soaps, they will certainly be a great addition for those that are into them.

Sent from my XT1254 using Tapatalk

My most memorable birthday was a trip to Clearwater, FL with my Dad for Phillies spring training. It was an amazing birthday present I'll never forget with lots of memorable father/son bonding. We often talk about going back, and will be in the next few years if a golfing trip to Europe doesn't get in the way.

One of my more memorable birthdays was a few years back. There was a bar & grill type of place open that had a huge sand volleyball court. There was a huge group of us, including our kids. Well... some adult beverages were had, some trash talkin' was done, and next thing you know there was a parents vs. kids volleyball game going on. At the time, my youngest daughter was a varsity volleyball player. (you can probably see where this is going) The kids annihilated us. It was totally embarrassing. The kids, of course, still mention it with some regularity. A good time was had by all, though.

I'm in, and thanks Captain!

Moderator Emeritus
Contributor
I remember a birthday I had a couple years ago and I met a Captain that made aftershaves. What a hoot! The guy even had lather bowls, and shave soaps. Really nice guy and operation. Gave me a lather bowl and a soda. Also a neat travel tote that I used just last week. If I recall his business was called Captain's Choice. Heeyyyy....that's you!!

I'm in!
For me it was my 18th B-Day when my parents decided to drop by my apartment (I moved out when 16) to wish me a Happy Birthday and I answered the door in a robe. Because they had interrupted my new girlfriend giving me my Birthday Present...

Thanks Captain for the contest and for a chance to remember a great memory.
Z

My 16th birthday - I was grounded because my parents caught me doing doughnuts in the car with the brand new set of tires they had just put on it. My gf and friends got together and threw a party for me at the house since I couldn't go anywhere.

My sister was born 8 years and 3 days after me. It didn't take long before we were sharing birthday celebrations, which with me being so much older meant the focus was all on her... except one year, jr in high school. I had a lot of rain, and we lived on the side of a hill, and on my birthday, underground springs above our house on the hill erupted. Massive amount of water and mud hits the back of our house. It was on a solid foundation so it held, but I spent the day trying to dig the back of the house clear of the mud. A lazy unemployed uncle (by marriage only) came to 'help'. His help consisted of telling me where to dig, and I didn't fill the wheelbarrow enough, and and btw don't tip the wheelbarrow when you move it. Course he got all the praise for saving the house, and I got nothing not even a birthday card, but I'm not bitter about it.
You said memorable not necessarily happy.

I am in. Unfortunately since my birthday was 2 weeks away from Christmas I was usually given a dual bday/xmas present. Fun times as a kid.

I'm in! It was 2 years ago that my wife totally surprised me by gifting me with a red betta fish. That gift came totally out of the blue. His tank sits on a table next to my chair and I find it very relaxing to watch him swim around. I can't think of anything for the same value that has given me more pleasure and enjoyment than that $5 fish!

I'm in. My most memorable birthday was when I was 38. Because I was always quoting a line from Richard Bach's Johnathon Livingston Seagull ... "I have achieved level flight!" You have to read the book to get the meaning.
Anyway, my girlfriend, now my wife, Arlene, treated my to a glider plane flight. Just like Johnathon, I soared with the birds and the winds. Yes, there was the pilot with me in case things went sideways. Got two 1/2 hour flights. Unbelievable feeling flying a glider a few thousand feet up. Best birthday ever.
Thanks for the chance, Captain.
Mikey
A

I am in sir it was nice speaking with you. One birthday I had that was awesome was with my grandfather and I got to spend all day with him and this was in my teen years. This was really an important birthday because after that day he got really sick and was never the same so I am thankful for that
T

I'm in. My most memorable Birthday was in 2001, just after having a heart attack and a triple bypass. I was home in bed, feeling like a train wreck, and my wife and kids came in with gifts and cards. At the time I was wondering if I would see any more birthdays, but here it is 2017, and another birthday coming up soon, and another grandchild on the way, and we are all happy and healthy. Life is good!

It was 10 years ago, we were celebrating mine n wife's birthday, since we're like 10 days apart, she was 9 months pregnant, by the time the party is over, she told me that she might need to go to the hospital since she's saying she's starting to get a strong contractions, and the next day our first daughter was born.

I'm in, my 44th bday is coming up and I'm taking a blacksmith class the next day
You must log in or register to reply here.

Friday at 2:54 AM
HazMat Shaver

Saying thank you to our scuttle volunteers

*GILLETTE SLIM/ LATHER BOWL* Newbie PIF - join in by answering this one question...
2