Moderator Emeritus
As new wetshavers come into the forum and begin to learn about the different razors available, the "which Gillette is this" question comes up pretty frequently so I thought I'd provide a snapshot (pun intended) of what's available on the used market (read E-bay). These are the razors I personally own and there are a couple of razors absent such as the Aristocrat and Toggle but hey, it's all I got!! It's not likely I'm going to spend the $100.00 plus that the toggles are bringing now. They were only made one year and that makes them pretty popular with collectors. I hope some find this helpful. Shave quality is my opinion, and as always, YMMV. 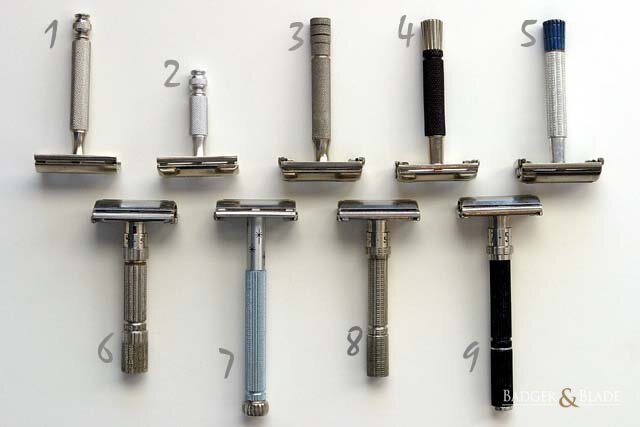 1. Fixed head, all metal screw on handle. Poor to average shaver in my opinion and I don't personally recommend it.

2.Gillette travel razor. These came in several different holders from faux leather to plastic usually including a box of blades. Handle is really too short to be of much use. This particular razor was made in 1967.

3.Superspeed. This is one of my favorite razors. The head design is a little different than the later superspeeds and gives a very nice shave. It remains part of my rotation. This razor was made in 1953 and is a twist to open design, sometimes called "silo" opening.

4.Superspeed. This is a later version with a black handle. Not as good a shaver in my opinion but these are very inexpensive so might be worth a shot if you're just starting out in wetshaving. This razor is also TTO.

6.Enter the adjustable. This is one of Gillettes first adjustable razors. It has a moveable ring just below the head with numbers 1 to 9. One being the least aggressive and 9 being the most (the blade will be closest to the safety bar on 1 and gets progressively farther away as you dial up the numbers.) This is my favorite adjustable Gillette and is a very popular and a good shaver. It has a nice weight and balance and is a very solid, durable razor. It is sometimes referred to as "fat boy" or "heavy duty". This particular razor was made in 1959.

7.Ladies non-adjustable razor. This was marketed to the ladies for their particular needs. It is light blue with little stars on the handle below the head. Not a bad razor for the guys either it you're secure in your manhood! I like the long handle but it does belong to my wife now. It was made in 1965.

8.Slim adjustable. This is a similar razor to the heavy duty but with a slimmer handle and the head is slightly thinner. I can't seem to get as good a shave with this as the HD which I attribute to the difference in the head design. A lot of guys use them however so they're certainly worth a try. This is a 1966 model.

9.Black handle adjustable. Same as above but with longer, black handle. Again, I know guys who love this razor and it also would be worth trying. This particular razor is a 1973 model.

I've never owned or tried any of the open comb models nor any of the plastic handled Gillettes made in England. I wouldn't recommend them based on what I've seen.

Gillette razors have increased in price recently due in part, I'm sure, to the shaving forums popularity and resurgence of wetshaving. The superspeeds sell from $3.00 to around $10.00 and the adjustables sometimes fetching $30.00 in mint condition. Give them a try....they might be just what you're looking for. 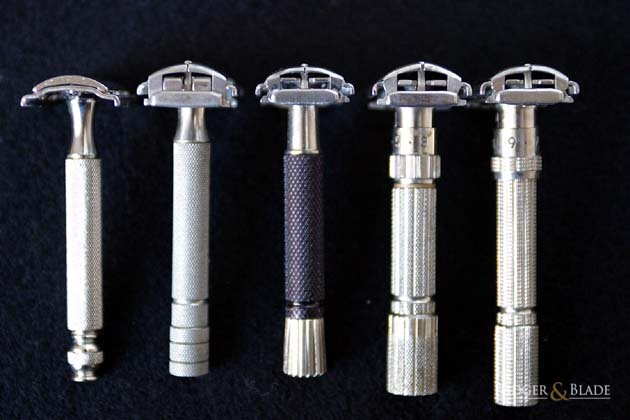 The razor on the left is a Tech and is a 3 piece razor.

Next are the two adjustables. The head comparisons are just like the two superspeeds above with the heavy duty on the left having the slightly taller head than the newer slim model on the right. Again, I notice a difference in shave quality between the two, but both are popular Gillettes so, it could just be me or my technique with the two razors.

I believe most in this forum, myself included, consider the newer Merkurs to be more aggressive razors especially the Futur and Vision. The Gillettes can be an inexpensive and excellent starter razors and you may even find they are your razor of choice. Coupled with a Feather blade, I can get great shaves with my 1959 fat boy adjustable or my 1953 Superspeed. There's something about shaving with a 50 year old razor that I just enjoy.
Last edited by a moderator: Feb 7, 2017
D

Very nice, Jerry! I have a 1956 super speed (all silver handle), and I just picked up a 1963 adjustable (silver, slim handle) that needs a bit of cleaning but is otherwise in super shape.

How about some close-ups of the heads, to show how they changed over the years? (I know: no good deed goes unpunished.

I have skinny Gillette adjustable on the way.

I was looking to pick up a super speed, but whatever is popularizing them right now is really driving the price up to ridiculous heights when you can get a Merkur HD for $30 or whatever.

Moderator Emeritus
While I don't read it, I've heard Corey's been touting it as his favorite razor in his shaveblog. I have't looked lately to see what they're going for but they were very inexpensive 6 months ago.

Cool post Jerry. I picked up what I now know to be a Superspeed last weekend ($5) at an antique shop. It's the top center razor in your picture. I know next to nothing about DE's, I normally shave almost exclusively with straights. Occasionally an old Schick Injector if I'm in a big hurry. Haven't shaved with this new acquisition yet, but I'll give it a shot soon. Gotta get it cleaned up first. There appears to be some light rust(?) down in the tiny grooves on the knurled handle. Not sure what to clean that out with. I tried an old toothbrush and some whitening toothpaste. Thought that might work because of the abrasives in the toothpaste, but no luck. It did do a fine job of removing the old soap scum, etc. from the head.

Congratulations on the nice razor at a nice price! That razor is difficult to clean because of the texture of the handle. I have another that's shinier than the one pictured and I used Flitz metal polish on it. Flitz does a nice job of cleaning the razors. I also hooked up my Dremel with a small buffing pad attached and it helped to get down in the groves more. Let us know how you like shaving with the razor.

I have a dremel with the various attachments, but I also have some brass brushes I might try. I have MAAS, Flitz, etc but didn't think it would get down into the grooves. Probably try that first I suppose. I'll let you know how it goes.

Moderator Emeritus
I added pictures of the heads on the most used razors (except the oldest which is just for the purpose of comparison) showing the differences in the overall shape. Let me know if anything else would help.

Very nice collection. I've got a couple of adjustables and do have future plans of acquiring a super speed.

Hi-I collect shave mugs and razors. I've always been outgunned and outbid on the Schick injector with adjustable dial. I did buy 2 Pal adjustables on Ebay. I use a Gillette adjustable razor that I've had since I was 16 and love it. Even purchased more on Ebay at good prices. When I moved to Sw suburbs of Chicago back in 1994 one could still buy the adjustables w/black handle at Target. Not any more-the double edge provide the best shave. I have couple of Gillette speeds and even a gold aristocrat. I have the merkur double edge and all 3 adjustable razors, but the old Gillette adjustables are tops, not to mention cheaper. Bladerunner

Now I know the Gillette that came with my Hoffritz Slant was a 30's Gillette. Great condition. Too bad it's supposed to be a crummy shaver. I was considering giving it to a friend as a first DE, but perhaps now I'll reconsider until I try it myself.

atnight said:
Now I know the Gillette that came with my Hoffritz Slant was a 30's Gillette. Great condition. Too bad it's supposed to be a crummy shaver. I was considering giving it to a friend as a first DE, but perhaps now I'll reconsider until I try it myself.
Click to expand...

I probably wouldn't consider it a crummy shaver but it's not on par with the superspeed or adjustables in my opinion. I was able to get an ok shave with it but I try not to settle for an ok shave! Gotta have that BBS shave every day you know. You never see anyone using one of those razors in the SOTD and there are tons of them still on the used market. Give it a try, I'll be curious to hear what you think of it.

I probably wouldn't consider it a crummy shaver but it's not on par with the superspeed or adjustables in my opinion. I was able to get an ok shave with it but I try not to settle for an ok shave! Gotta have that BBS shave every day you know. You never see anyone using one of those razors in the SOTD and there are tons of them still on the used market. Give it a try, I'll be curious to hear what you think of it.
Click to expand...

Thanks for the reassurance. I will try it, but I have fresh blades in the Slant, Injector and Super Speed now, so it may be a few weeks. I'll post back on this thread if I can remember to.

Moderator Emeritus
Can we make this a sticky?

rtaylor61 said:
Can we make this a sticky?

D
Adjusting to a new razor