emwolf said:
My contention is that Tribute is a tribute to the great Woodhue scent by Faberge, so how about your blend name being Rum Hue?
Click to expand...

I think I found the sweet spot.

Definite vanilla-like high note, which settles down to a vanilla/bay quickly and is very satisfying. To my nose at least. Since I didn't add any water to the mix, the longevity shouldn't be adversely affected. Bute Bay is born!

Anything similar to Floid Blue in here?

NorrisB said:
Anything similar to Floid Blue in here?
Click to expand...

I posted my mix in your other thread.

So, this morning, I discovered something purely by accident. It is Friday, so of course I used Clubman today. After getting to work, I discovered that one part of my chin was irritated. I remembered that I had some Stirling Texas on Fire Witch Hazel in my drawer. I engendered that it it's pretty strong, so just put a drop or 2 on the spot. The combination of scents are very nice together. When I get home, I think I will mix some up. The ratio I am going with is due to the LOTH hating Texas on Fire.
1 part ToF
3 parts Clubman
I think I will call it Fireman.

G.W. said:
I just recently picked up a bottle of Jovan, and last night I tried this mix. Not bad at all. I think it's going to get some use over the colder months. The wife even said she liked it on me, so that's a big fat thumb's up for me.

The AV, Jovan, and Pinaud Musk blend is really great. I mixed up a small amount back when I originally posted that, and have recently put together 3oz worth of it. I like it a lot, it's not overbearing. Just clean and masculine.

Hey, @TheVez2 is there a "Badger Blends" label? I've got this in a Cholula bottle, and it's begging for something.

No, a few folks made their own and examples are towards the beginning of the thread. I have my own personal template that I use, which are based off the Bootleggers labels I made.

Just recently procured a bottle of PAA Sk8-Shop aftershave, which was supposed to smell like its name. I've been a skateboarder for 35 years so it made great sense on paper. However, on my skin it ended up smelling like grandma's pink powder puff. Wife immediately sent me to wash off the very first application.

It really did have very pleasing aroma notes from a skateboard shop going on, but the honey/floral sweetness at the base just wasn't properly balanced out to my mind's eye. It smelled overall to me like an early 80's shopping mall, but something was missing from the picture - the ashtrays. I wondered "what would an 80's mall smell like with a 70's airport lounge?". So I mixed up...

To make "Oak Ridge", the name of the mall near where I grew up. It worked! This unlikely concoction has quickly become one of my favorite splashes, and my wife absolutely adores it. Only issue - now when I wear Special Reserve by itself I crave the Sk8-Shop along with it. Gotta be careful messing with the classics...

Not an aftershave per se but thought my homemade witch hazel toner fit best here.

I've used Thayer's cucumber and lavender witch hazel toner and does a decent job to tighten my pores post-shave but I was in an experimental mood the other evening so thought I'd see if I could come up with my own blend.

Started with a bottle of pharmacy witch hazel (which as an aside unadulterated smells like my gym shoes) and would add a bit of this or that till I was happy with the results. Tried bay rum aftershave and to get it so the witch hazel didn't stink the bay rum became too pronounced. Next was Lucky Tiger Aspen and that wasn't bad but I really didn't want something with alcohol. Then I started to play around with essential oils and blends. There were a few solo oils that weren't bad but it was a blend called "Zen" from Art Naturals that hit it out of the park. Its a mix of lavender, Spanish rosemary & sweet orange oils. Added some aloe vera to give it a bit of moisturizing and ended up with the following ratio (witch hazel : essential oil : aloe vera*) 1 : 0.010144 : 0.05
*Don't know the concentration of the aloe vera juice, its just labeled as "extra strength" from the aromatherapy place my GF buys from.

The oils do tend to separate out but a quick shake before use puts them back into solution. Might have the GF pick some liquid emulsifier next time she's at the stink store.

I've been using it for a few days and am quite happy with the results. 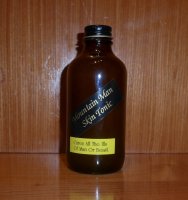 Ambassador
I've noticed Thayer's Superhazel is just too sticky, so have started adding it as a component to some alcohol-only aftershaves, in place of the glycerin I usually use.

Results are promising, but no recipes yet.

Ad Astra said:
I've noticed Thayer's Superhazel is just too sticky, so have started adding it as a component to some alcohol-only aftershaves, in place of the glycerin I usually use.

Results are promising, but no recipes yet.

This is what I do. I add Thayers to alcohol aftershaves at about a 10:1 ratio. I use the unscented toner but at that diluted level I doubt that the rose water fragrance of the original Thayers would be noticable. Best part is the small nipple of the Thayers bottle fits right into the flow restrictors of most aftershaves so no tools or funnels are neccessary.

Ambassador
Hey, I finally got one: Super Veg.

Lilac Vegetal with a topoff of Thayer's Superhazel.

For those who haven't already added some glycerin to their Veg (and all Pinaud products) the Superhazel's added "face food" gives some moisturizing and staying power. More importantly, the sweetness and peppermint oil tones down the Veg's loud, brassy funeral home notes. Try it!

Contributor
well, I need to get me some Superhazel!

Previous attempts to make some use of the Veg included Frozen Veg - with Osage Rub - and I did, hm, one other ...

I put a dime sized blob of Nivea Men Sensitive Skin "Cooling" aftershave balm in my hand and add a couple drops of whatever liquid aftershave or cologne I want the scent of, blend together and apply. Works great and the moisturizing qualities of the balm help lock in the staying power of the chosen scent of the day.

Laird said:
I put a dime sized blob of Nivea Men Sensitive Skin "Cooling" aftershave balm in my hand and add a couple drops of whatever liquid aftershave or cologne I want the scent of, blend together and apply. Works great and the moisturizing qualities of the balm help lock in the staying power of the chosen scent of the day.
Click to expand...

Ambassador
Super Veg has the best face-feel ever ... Any alcohol-only aftershave can benefit from adding Superhazel, IMO.

Felt like taking chances today, so I mixed (in my hand) a mixture of Avon Island Lime and Agua Brava. The wood benefits from the strong citrus, lime gets a nice conifer boost. About 50/50 I'd say.
I'm calling it Lime Wood.

Laird said:
I put a dime sized blob of Nivea Men Sensitive Skin "Cooling" aftershave balm in my hand and add a couple drops of whatever liquid aftershave or cologne I want the scent of, blend together and apply. Works great and the moisturizing qualities of the balm help lock in the staying power of the chosen scent of the day.
Click to expand...

I've done this with Nivea and AV, Clubman or Skin Bracer many times over the years.

Ambassador
Irked by my lack of Tabac aftershave, I decanted some 4-oz. witch hazel, added 25 drops of glycerin, and about 3/4-oz. Tabac EdC.

It immediately clouded/turned opaque, which is what alcohol does when it hits water ... but I used the stuff today: indeed I do have Tabac aftershave ... now.

Might tweak it with a few drops of castor oil.