After much name calling, cursing, and beer drinking, Joel and I finished the filming for our little homespun dvd.

One of the ways we were able to procrastinate a little longer was by taking pictures of stuff. Just thought I'd show you a little peek of some of the stuff used in the 'making' of the video. 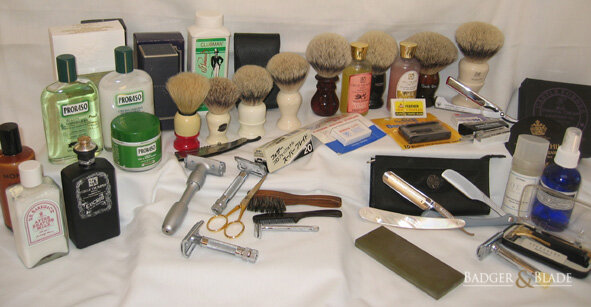 And.... Not all of the following were used in the video, but it's a shot we couldn't resist: 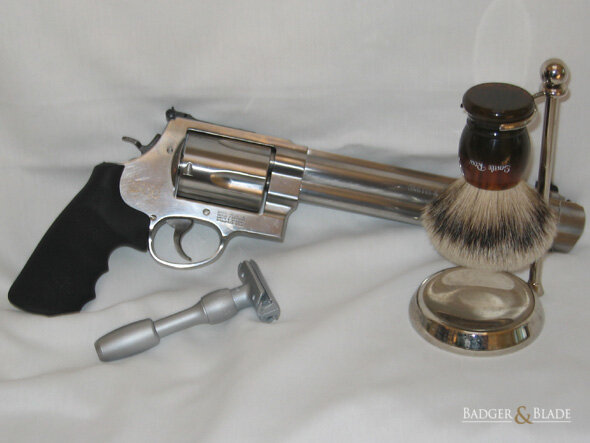 While that gun might look like your run of the mill .38 next to that beastly Vision and Saville Row, it's actually a .500 Mag.

Talk about bringing out the 'big guns' for the video ...!

Now that's a gun. Were you and Joel using it to protect your shave products?

And.... Not all of the following were used in the video, but it's a shot we couldn't resist
Click to expand...

Obviously you couldn't use the brush stand in the video...with no sharp edges, how could you shave with that? So, what I'm wondering...

gage0921 said:
Every time I see one of joels guns it makes me miss my bushmaster AR-15

LOL..... I think if Nick and I pulled out all of our weaponry and took pictures of it - it would be far more embarassing than all of the shaving crap we have lying around. Remember.... that is just some of the shaving stuff I brought down. One day i'll have to take a pic of the whole lot... might be a little scary though!

wwsmajret said:
Talk about bringing out the 'big guns' for the video ...!
Click to expand...

Hahaa, we spare no expense at B&B!

Austin - I was doubling as security and cameraman, and with that thing strapped to my side, you'll understand why there was so much camera jitter.

Sean - Joel has some beautiful guns, but they all could potentially serve some practical purpose. That completely unnecessary bad boy is all mine.

Nick said:
That completely unnecessary bad boy is all mine.
Click to expand...

I have a bad boy that I need to take pics of.........off hand I dont remember the caliber but it looks like something to shoot elephants with

Most of my rifles are antiques. Ill post pics one day.