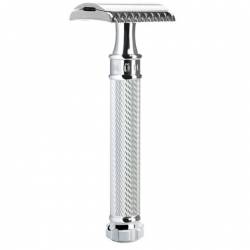 The R41 TWIST is my favorite Mühle razor to date, and it’s among my all-time favorite razors, along with offerings from Above The Tie and Joris. The new R41 combines my most-desired features in a way that few other razors have done. It is capable of very close, comfortable and carefree shaves. It is easy to use and provides all the best attributes of R41 design with none of its downsides.
Share:
Facebook Twitter Reddit Pinterest Tumblr WhatsApp Email Share Link