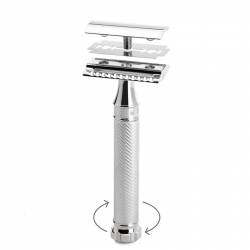 Mühle's latest addition to the shaving world is the R89 TWIST, a two-piece variation of the R89's original three-piece design.
Nearly every wet shaver is familiar with the R89—a modern day classic. The razor was originally developed by Andreas Müller of Mühle, Neil Jagger of Edwin Jagger and a small team of select craftsmen from both houses. The head they designed is common to all Mühle R89 and Edwin Jagger DE89xx razors. The head is the standard component that is paired with over three dozen custom handles from at least three manufacturers.
Modern razors using the R89 head are among the best known and most widely used razors in the world. They find especially strong acceptance in the U.S., Canada, Great Britain, Europe, South America, Australia and Japan.
Share:
Facebook Twitter Reddit Pinterest Tumblr WhatsApp Email Share Link