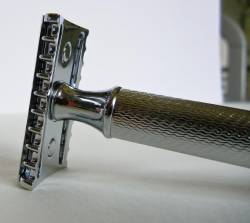 I bought this direct from Muhle as soon as I heard about it on b and b.

This model of the R41 is very different than the previous as it is not a true open comb in the traditional sense, rather Muhle have decided to go back to this model being very aggressive and used a &quot;tooth comb&quot; to describe it.

Generally the design can't be faulted, as with all other muhle razors it just oozes class with a minimalist slant to it.

This morning was the perfect opportunity to try it out, and did so with a gillette 7 o clock yellow in it.

I prepped my face in the usual way (proraso glycerine soap followed by floid sanalor) and mixed up some lather thanks to a new tube of kent brushes shaving cream with menthol (In my opinion this cream doesn't get enough love but anyway) and a tobs silvertip brush.

As soon as you begin to shave you can feel the razor and hear it &quot;sing&quot;. It does make a very loud sound of the hair being cut as you draw it across your face but when you've done your first pass and had a good feel at where you shaved you will say... WOW! in a good way. It feels like you've done 2 passes, very, very smooth. I did draw a little blood but then again that was my fault as I wasn't paying attention.

I completed the shave and my jaw just dropped as to how smooth it was, definitely bbs.

Splashed some polar ice on when I was done and thier was a slight burn but then again I always get that.

Pros: mass, agressiveness
Cons: lack of knurling on the handle
The 2011-model R41 by Mühle is designed to cut tough beards. The blade exposure allows the razor to cut efficiently, but the result is an undeniably aggressive shave. Price: Most online retailers sell the R41 for around US$61. A decent price for a high-performance razor that should last decades. (I borrowed one for a few days, so I’ve not yet purchased one.) Quality: Plating is good, but I don’t know what alloy is underneath. User Friendly: Typical 3-piece razor. Blade loading is straightforward. Grip: I expected more pronounced knurling for such a weighty and aggressive razor, but I was pleasantly surprised by the ease at which I held the razor. Aggressiveness: Significant blade exposure makes the razor leap out and grab whiskers. It’s as though my beard insulted the R41’s mother. Adjustability: This is not an adjustable razor. Balance: Center of mass seems to be right at the sweet spot.

Pros: Very agressive, great for tough beards
Cons: Can dull the blade fairly quick
Ok, I've been reminded by a contributor on b and b that I really shouldn't be using the reviews section to post my initial impressions. Granted I understand what said contributor stated and have been using this razor continuously for a month now with a combination of blades and creams/soaps in order to provide a better review.

I'm only going to comment on items that have changed, so think of this more as an update on the original review I posted.

In terms of it being user friendly I still think its reasonably ok, however I think if someone that has just started de shaving this isn't the razor for them, you do really need to have some experience and have your technique down in order to shave effectively with this.

Aggressiveness, now to me, it feels like your using a straight on your face, almost..although it will get you bbs.

The main issue with the razor, as pointed out by the contributor I was discussing earlier is that by the third shave using this razor the blade is dulled, now to be fair I have found this myself with certain blades, such as feather and astras, although I have been using unbranded Israeli personnas for the last week and only had to change the blade once.

In general it is a quality razor that produces excellent shaves in my opinion, although if you have sensitive skin or prefer a less aggressive feel from a razor you may want to think again.