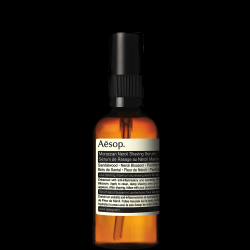 I've been meaning to write a review on this product now, for over 5 months.

This product came as a complete surprise. I travel quite often, and realised I'd left my shave stick at home. I quickly ran to the local shopping centre and grabbed the Aesop Neroli shave serum. It was a last resort given the time.

Initially I was extremely disappointed with the lather. It was a thin, watery mess. However, as I didn't have anything else I persisted, and I'm glad I did. While the lather was less than desirable, the result was fantastic. I had the closest and smoothest, nic and irritation free shave of my life. I followed that up with a sample of their aftershave balm, and I was BBS, and smelling great.

I thought the shaving gods had simply smiled upon me, and given a great shave despite the product. I've since continued on my travels with the shave serum, and time and time again, it has delivered. It's given the best shaves on a consistent basis hands down.

Now, the lather isn't a beautiful meringue, yoghurt consitient thick lather you would get from C&amp;S 88, Castle Forbes, MWF or anything of that nature, in fact, far from it. It would probably resemble your very worst lather, however, be persistent, because the shave is spectacular. This one is a truly hidden gem.

The cost is reasonable once worked out. I bought a 60ml bottle for $40, and based on daily use over 6 months I've only used a third of it. I use two squirts on a damp brush, and apply. It's enough for a comfortable two pass shave. The smell is quite unique, its a very warm, citrus, woody, sandalwood fragrance.

I've tried to upload the official Aesop shave video, which I hope works, as it will provide an idea of the lather consistency. http://www.aesop.com/au/skin-care-1/shave/moroccan-neroli-shaving-serum2.html