I really don't know who exactly came up with the idea originally of taking one of the more elegant Vulfix handles from "The London Series" and creating a hybrid Vulfix/Simpson/Simfix/Vulson brush creation by smuggling a 2 band Snow White capped, charcoal black based bristle knot into a simplified Masterpiece of a brush. Of course it had to be the brainchild or colaboration of Phil from BullGoose, the exceptional vendor and enthusiast of wet shaving from California.... but was it similar to his other venture, "The Ehsan", a Simpson Military turned brush, the Colonel... done up with similar 2 band strands that became a sort of cult-like brush? Whatever the case may be, the Grosvenor LE was born to serve new and old wetshaving fans alike. It's meager $90.00 price point is the most economical way to dip your toe in the 2 band water and see how you like it. I personally recommend this brush and it's sole vendor, Phil @ BullGoose. Please see his site for advertised brush specs and measurements of handle and loft.

I have "dated" many brushes... I'm hoping for a long term relationship with the Grosvenor LE. Now, a brief synopsis of the brush...

The brush is subtle in design, expertly lathe turned by a craftsman on the Isle of Man and has a generous handtied knot of 2 Band Super Badger that has whiter tips than any HMW Plisson I ever owned. There is simple branding on the brush and no ephermeral gold Simpson sticker to wash down the drain. It might surprise, as it did me, as to the fairly compact nature of the brush from the base of the faux Ivory handle to the fan/bulb tips. I say fan/bulb because it shares both of those characteristics. Fan enough to generate a nice amount of lather with a hard soap, and bulb enough to tool around your face quite precisely whilst face lathering. This is in my mind a true face lathering brush and I use it that way. 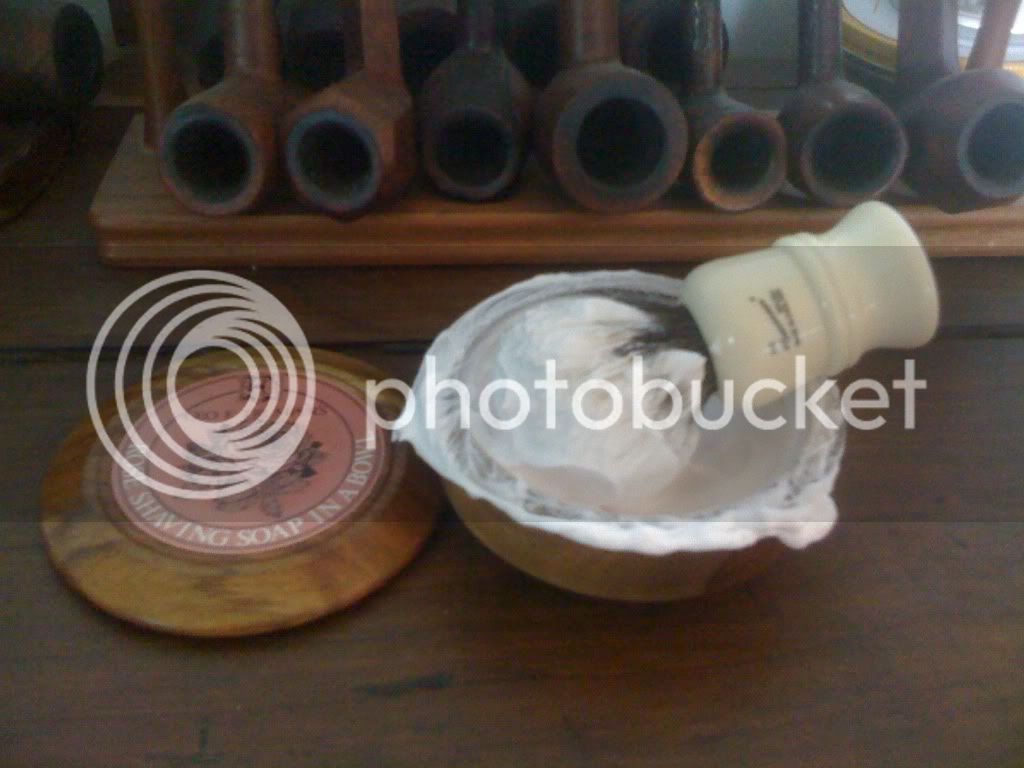 It cuts through soap and loads with ease. The flow through is right on the money as well, surrendering 90+% of the lather where you need it (in copious amounts) and only mere thimbles to squeeze out after scrub/painting your final pass with the brush. It doesn't have a massive bloom and dries very nicely with a gentle squeeze, shake, once or twice flicked against a dry towel and then stored upright.
Share:
Facebook Twitter Reddit Pinterest Tumblr WhatsApp Email Share Link

The grosvenor has quickly become my favorite brush in my rotation.

Price: I paid $90 for this brush from another forum member, which is the same cost as new. I have no issue at all with what I paid. Beings as this is the Simfix 2-band super hair, this is by far the cheapest price you can pay for that knot.

Quality - It's simpsons famed 2-band super in a nice hand turned handle that is both comfortable to hold and is truly easy on the eyes. Has not shed a single hair in my use and provides consistent lather every time.

Density: Definitely not the most dense brush that I own, but regardless this brush has more than plenty density.

Stiffness: Heh, it's 2-band super so this brush has more than plenty of backbone. Very similar to a TGN finest extra stuffed knot.

Softness: This brush is super soft and feels great face lathering. After every time I put the brush down after shaving I think "I can't wait to face lather with this again" Definitely a face latherers dream.

Ergonomic: This just seals the deal for me. Of all the brushes I've owned, this one just feels the best in my hand. The handle is perfect, the weighting is perfect. Everything about it is perfect.

LAtherability: I face lather soaps and this brush always provides enough lather for 3-4 passes and doesn't take long at all to build up a consistent dense lather that I like.

Overall: If Phil makes another batch of these brushes or you've been dying to try the simpsons two-band super knots, then you owe it to yourself to get a hold of one of these. So far it is my favorite brush that I've tried and it will never be leaving my shave den. Great, great brush.

I have had this brush for several weeks now and think quite highly of it.
The price and quality are hard to beat.
The two band badger hair is beautiful and fairly dense. The combination of stiffness and softness is matched by few brushes. My Rooney Heritage Stubby comes to mind. This brush feels good both on your face and in your hand.
This brush does seem to use a lot of product for its knot size. Given this one minor complaint, it has no problem making lather. It handles both soap and cream with equal ease.
This is a wonderful shaving brush. There are a very limited number of these brushes and I consider myself lucky to have one of them.

I am starting with this brush, I am not very impressed, it's a good brush, but I expect more from it. Usually the badger brushes do their best after some uses, I'll wait to get more.

The brush looks great, very nice contrast in the hairs, the handle is confortable and the size is perfect. Weight enough to feel it in the hand.

Is a very dense brush that eats a lot of soap or cream,....it requires a bit of work to get lather,...but it desn't matter to beat with it because it has a lot of backbone.

A great value for the money.