What was your first serious watch?

In other words, the first watch that you bought, for yourself. Not a gift given to you, but a watch purchased based on a perceived need. Mine was this, which I still own.

A Seiko 7002-7000-A1. Purchased at the Fort Riley, KS PX. Because I had the money and I had the idea an Artillery Fire Direction Control man is the kind of man who wears a watch. I was half right. An FDC man would be better served by a stopwatch function and the ability to time hack for "time on target" TOT fire missions. The humble G Shock would've been a more practical choice, but this was my choice. And I wore it as a soldier for about 6 years. It is shown here in Dakota Watch livery, as the rubber band had long since given up the ghost.

The bezel no longer "clicks". And shaking it tends to get the second hand moving, but with no faith that accurate time is being kept, but it was the first watch I bought. Me.

Consequently, I didn't wear it for a couple days at some point...which led me to complain to an NCO my new purchase already had a dead battery. It was here that I was taught about "automatic" watches, which I was up until then completely unaware of. Now I act like I was born with that knowledge...and that one doesn't drink red wine with fish...

The first watches that I bought with my own money were Timex Ironman Triathlons. I bought one in 1986 when they were introduced, then another in 1989 when the first one melted from chemical exposure at work.

Around the same time, I graduated from college and wanted to wear something nicer at convocation. So, I went to Sears and bought a simple Seiko dress watch for $150.

Still works fine. Every three years or so, I install a new battery. Otherwise, it sits in its case.

I treated myself to this Omega Seamaster Chrono Diver for my 50th birthday in 2017. It is a 42mm 2011 model and I chose it in part because my Dad always wanted a Seamaster but could never afford one. I think of him sometimes when I look at it and I wear it every day. It has never let me down but loses a couple of minutes a week which I think is normal. 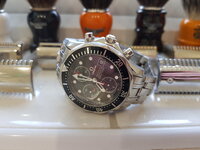 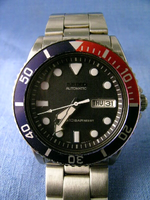 Contributor
A Rolex 16233... Two toned jublie, gold face with diamond markers. Wanted it as my "fancy pants watch", and I typically only wear it when I am wearing a tie.

I dont actually have a picture myself, but here is one in my chrono24 profile from when I bought it:

It was followed quickly by an Explorer II, which is my daily wear watch. Hoping to get a GMTII eventually...

Contributor
Vendor
I remember my first watch I bought for me, it was a Citizen analog Quartz watch - big thing then, guess it was 1971 or 1972. Had it for years until some 35 years ago when I bought myself my first Sinn watch. This Sin was one of the first all titanium watches and I still have it, never gave me an issue. Was also my first automatic. Then I followed with an IWC Porsche compass watch, but I never wore this too much, the bracelet did eventually give up and IWC was not able to replace or fix it as they are no longer having any parts for this watch. Bummer.
But, I think my all time favorite is my Stowa Marine Original.

Sent from my iPhone using Tapatalk
Click to expand...

Thank you. I know it is not an IWC, Breguet, Patek, Rolex, Omega, TAG or even a Glashütte or Laco or Sinn but I love it.

doug1066 said:
Thank you. I know it is not an IWC, Breguet, Patek, Rolex, Omega, TAG or even a Glashütte or Laco or Sinn but I love it.

I have worn Seiko watches for the past 20 years. When I was still working, a self-winding watch worked quite well, but once I retired, I realized that I did not wear it often enough to keep it wound. Now I use a Seiko Solar watch. The one I got is a Coutura chronograph; I still have not figured out all the functions. When I am not wearing it, I leave it out on the counter so it can stay charged. Although called solar, indoor lighting is adequate for charging.

The first watch I bought for myself with my own money was a Casio Forester. It was sadly stolen by an ex, who then told me "It's just a twenty dollar watch, you cheap *******!"

Well, STOWA and Laco were two of the companies that made Flieger watches for the Luftwaffe.

Rose Gold Plated Gruen from "Wanna Buy a Watch" in LA in the summer of 1986.

Moderator
An Omega Seamaster that my parents gave me when I graduated from high school. I had that watch for about ten years when I had to have it serviced. I went to a jeweler near where I worked and he guaranteed it would remain intact if I got it wet. About a month later I wore the watch when I was at a beach. The crown had not been installed correctly and the watch was ruined. I returned to the jewelry store only to learn that the went out of business. I sent the watch to Omega but they could not repair it.

Zig the Pirate said:
The first watch I bought for myself with my own money was a Casio Forester. It was sadly stolen by an ex, who then told me "It's just a twenty dollar watch, you cheap *******!"
Click to expand...

Man, i'm trying to find a casio EF-503 or a casio EF-500. They look really nice. And i like the different straps you can put on them. Unfortunately they seem to be sold out everywhere i look. Ebay has a few, but they are way too much, they were originally about $65