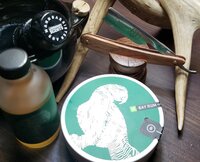 happy Pirate Friday!!!! seemed like Rum was the only logical choice for the razors first use. 2 1/2 passes of perfection. due to size, the holds are different with this one in some places. Awesome razor!!!! looks like brass washers on the inside pivot. 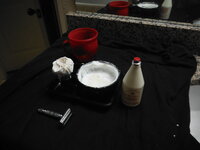 (This one was for ‘science’ and it is time to bin the blade.) 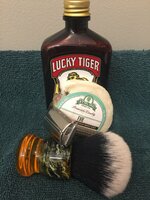 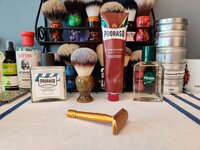 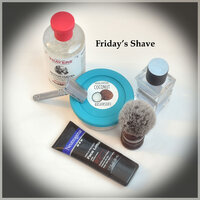 Friday’s Shave ​
Going with Haslinger Coconut, today. Today’s brush was a Frank Shaving Syn. The razor was my Feather AS-D2 with a Feather blade. After a four-pass shave I used cool water to remove any excess lather. I then applied Thayers Rose Petal WH followed by Neutrogena Triple Protect. After my shower, some Yves Saint Laurent cologne.

An Italian shave for the most part. I was trying out Proraso's white shave soap for the first time and that prompted me to add as many Italian things as possible. I therefore used Proraso pre-shave, the Razorock brush and Mr. Fine's Italian Citrus aftershave. The blade is actually made in Russia, the razor is German and the bowl is American. I tried.

I'd not used the Mühle for some time and having had three days growth, I was pleased to find the soap lather up really well to ameliorate the Mühle's aggression, the blade was on it's third and final use, so that too helped dial it down.

Taking it very easily, I had a BB shave in two passes with some light touch ups. I prefer saving the Mühle for days when there's enough growth for it to work with, so it doesn't get too much use, but when it does, it excels! Very happy with a weeper free 10/10. 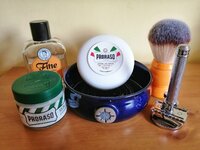 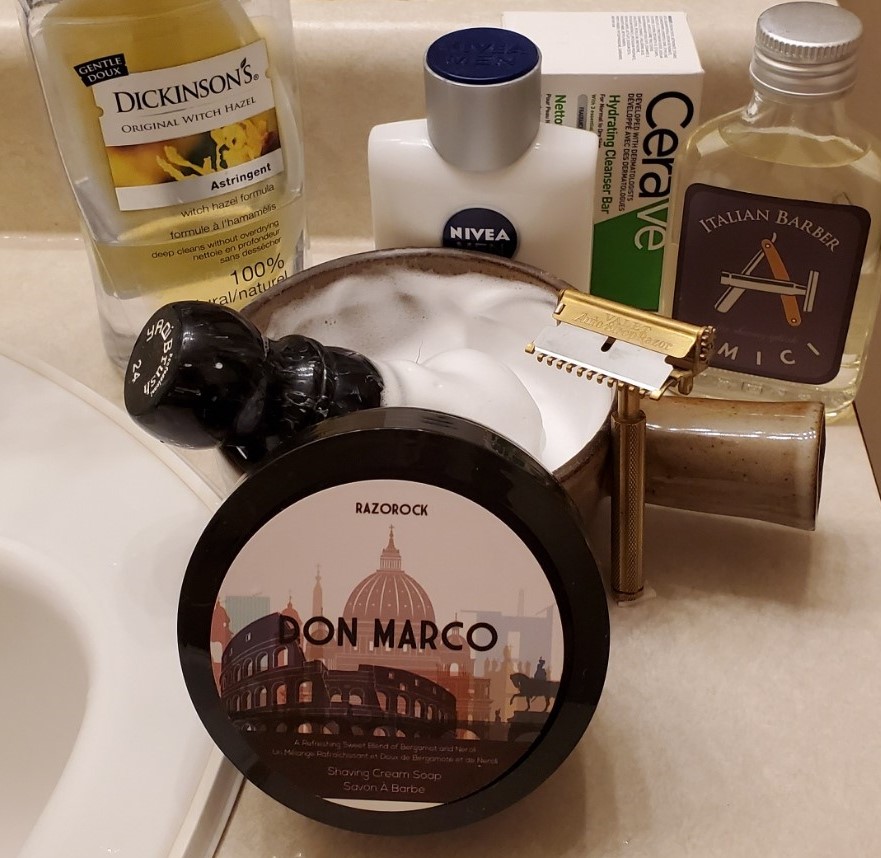 New soap for me, fresh Personna red blade and a too close shave. I just plain old cut myself up today. Not sure what happened but on my right jaw line I put about 4 big weepers on there. Impressive really. The scent of the soap is definitely close to it's name. I grabbed it because again I am heading to the lake and it made me feel optimistic. The weather forecast says otherwise. Low score for all the blood. The rest of the shave is actually really good. Just a bit of hot face after the shave but this is probably my most aggressive razor with a fresh blade. 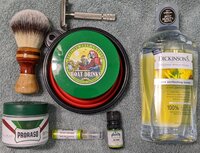 2 nicks. No irritation.
Pleasant DFS++ shave.
Feathers just don’t hold an edge for me. Then I try to compensate!!! 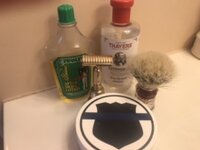 The LEA Professional cream....what a crazy large tube it comes in! The scent hits FAR above its price point. It's a mildly scented orange citrus/aquatic/woodsy/soapy bouquet which is absolutely delightful to sniff, and if I was blindfolded, I'd guess this was a TOBS scent, which I rate towards at the very top of the heap in the scent department. Once rinsed up, there's no scent left behind so it can be used with whatever AS of frag one desires without any concern for clashing/matching.

I used an inch of cream, which MAY have been too much, I don’t know for sure. I had enough lather for 3 passes just after a minute of face-lathering, adding water occasionally. Lather was everywhere, the really nice slick creamy kind and very textbook lather, whatever that means. This cream is both protective and slick and right up there with the best I’ve ever used. No irritation or pain during the shave, just some mild redness in the usual rough spots that were gone by the time I finished rinsing off which leads me to the only gripe I have with this cream: drying. The soap rinsed off very squeaky, like when using basic Ivory soap to wash my hands. My face also tightened up a bit for a good 20 minutes, then went away. It’s possible I used too much cream, but there's only one way to find out. I'll just have to give it another shot using half an inch of cream instead. At this rate this tube would probably last for several hundred shaves.

Brush is awesome as usual and the Nacet on use number two felt like a fresh blade. No tugging, and smooth as can be. Great shave day. 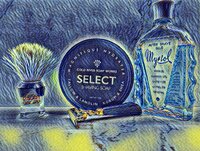 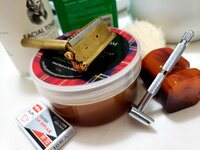 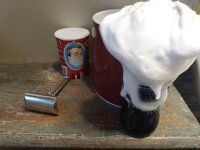 Excellent shave with the Timeless SS.95 again. I did bring out the TI.95 for 1 pass just to compare and the only difference I could feel was on the weight of the head. I have to apply a bit of pressure with the TI one. Besides that I couldn't feel any difference.