What are you drinking tonight? 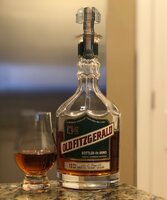 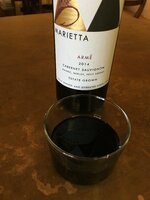 A sazarac cocktail is easily my favorite. I just wish more places knew how to make them. Perhaps I should just purchase the ingredients myself....

ByMyBeard said:
A sazarac cocktail is easily my favorite. I just wish more places knew how to make them. Perhaps I should just purchase the ingredients myself....
Click to expand...

After having one at The Roosevelt in New Orleans, it became a Friday ritual to mix one up. It takes a few minutes to make it proper, but that first sip...! There is a place in Naples, FL, The Bay House, that does a bit of New Orleans food and drink, and they make a great Sazerac. Don’t know of another local spot I’d trust.

You lads are a bad influence with all your talk of Sazerac...

Moderator Emeritus
Based on what they call a Matador at Amada in Philly. Rye muddled with candied, but not crystalized, ginger. (I actually just let the ginger soak in rye for months.) Lemon juice. Elderflower syrup. (Elderflower liqueur like St. Germain works, too, but is not as intense as a good syrup. Monin is a terrible syrup!)

It’s fall, so it’s strongbow or magners for me tonight!
B

Another pour of EWBiB last night. With an added rock this time. Apparently 100 proof did not agree with burning the roof of my mouth during an earlier meal..... 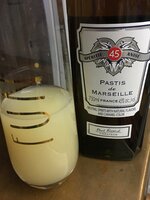 Just an ounce of Pastis with 4oz of chilled water. I need a Pastis glass.

FL shaver said:
View attachment 1168616
Just an ounce of Pastis with 4oz of chilled water. I need a Pastis glass.
Click to expand... 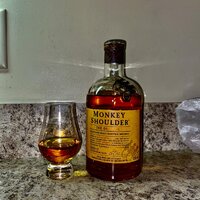 Every once in awhile I get a taste for it. No other beverage gets me craving dinner like Pastis.

FL shaver said:
Every once in awhile I get a taste for it. No other beverage gets me craving dinner like Pastis.
Click to expand...

Europeans really do the aperitif/digestif right. I do not know why I do not in my day to day life! 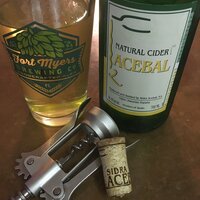 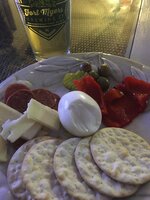 Small snack and beverage after swapping the thermostat in the wife’s car.

We went to Asia's Best Bar last night: Jigger and Pony - https://www.jiggerandpony.com - we used to go quite often but then they moved location. Initially they were (too) close to my office but now it requires a taxi so we fell out of the habit of going. Then we decided to try it last week, just rocked up, it was fully booked. Yesterday afternoon thought I might see if I could book it and scored. We had a variety of classics, Vesper, French 75, Negroni and a Corpse Reviver no2 which were all pretty ok, although I preferred Atlas Bar's Vesper and Negroni. Then I asked the mixologist to surprise me, but along the lines of a whisky sour. He came up with a Blood and Sand, made with Talisker, orange juice, sweet Vermouth, Cherry Heering and a squirt of lemon juice. I was a bit nervous with the cherry liqueur as I am not keen on cherries but this was a great drink.

I then felt like a cleansing G&T and noticed that he had a bottle of Ki No Bi from Kyoto however, he disagreed (politely) with my choice and proposed Nikka Coffey instead if I wanted a Japanese gin. He was right. So I had two. 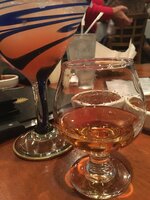 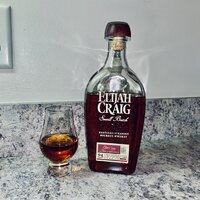 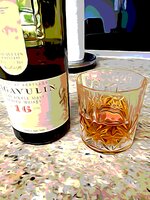