What are you drinking tonight?

Moderator Emeritus
That is a fabulous price. I do not think I have seen it for less than $40 in the DC area. I was thinking typically mid-$40 or higher, and a quick Google search seems to show it selling for $60 or more around the country.

Frankly at those prices, I was not buying, although I am willing to pay way more for Peerless rye.

You may be right that that mash bill is light on rye. Here is an article on a supposed authentic Pennsylvania rye that uses 80% rye. How They Make Rye Whiskey the Right Way - https://www.popularmechanics.com/home/how-to/a19679/rye-whiskey/#:~:text=To%20create%20his%20mash%20bill,yield%201%2C000%20gallons%20of%20mash.

I need to try this one again, and sure will, if I can find a bottle for less than $30! I am guessing there is nothing wrong with you palate!

Moderator Emeritus
By the way, I was not familiar with Breaking Bourbon. Seems like a great resource. Although I do not find myself agreeing much with Jordan the reviewer there for this Pikesville Rye and for Peerless Rye. To be fair, his review of the Peerless is from 2016, when Peerless was just getting started. He does refer to the thinking that this Pikesville is really the big brother to Rittenhouse Rye BnB. That does make sense to me. I would say similar flavor profiles. From another source, apparently the previous Pikesville sold generally only in the Maryland/DC area, did have a 65% rye mash bill. Fun stuff. And it sounds like I was wrong and there was some overlap in time as to the production of that Pikesville and this one. 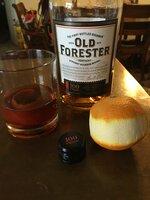 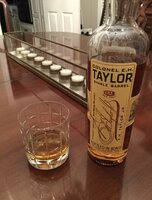 Larceny Bourbon, alongside a French Roast coffee and a couple of salted dark chocolate caramels.

The Knize said:
By the way, I was not familiar with Breaking Bourbon. Seems like a great resource. Although I do not find myself agreeing much with Jordan the reviewer there for this Pikesville Rye and for Peerless Rye. To be fair, his review of the Peerless is from 2016...
Click to expand...

I haven't used it in years, as I tend to get information on new whiskeys from Distiller. As with all reviews on these things, personal preference can come into play. But what I like most about the website is their breakdown of mashbills and history. Distiller is much more brief in their notes, which is typically fine as well.

I did revisit the Pikesville last night. I started neat, but added a few drops of water part way through. I quite enjoy the front of the palate, though stick by my initial thought that it feels more like a bourbon than a rye. I simply get a lot of sweetness and very little spice. I find the mid palate/early finish to simply be a bit too hot for my current tastes. Overall, I believe this is a great whiskey. I'm not sure it'll be a regular, but it will be enjoyed.

Moderator Emeritus
Makes sense. Good tasting notes. I had not see the Distiller web site either. Seems really good. There is a lot of good whisky/whiskey out there these days. Hard to sort through it. Thanks!

Moderator Emeritus
Been on an Irish whiskey run since Covid-19 started. Don't know why.

My favorite has been

Last night called for martinis, Tanq and Dolin 3:1, well stirred, with a jumbo olive rinsed of its external brine. Mmmmmmm 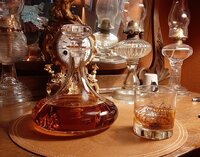 Contributor
My bottle of Evan Williams bib has finally cashed out. I opened one of my favorites, Buffalo Trace for tonight’s old fashioned. I started in on some really nice bourbon cherries for the new bottle. I love this bourbon. I think I like it a bit more than EW bib.

A bit off topic, but I love and collect oil lamps. Nice photo. 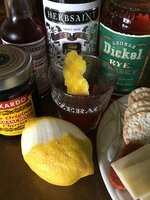 One of my favorites for a Friday..... 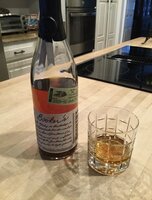 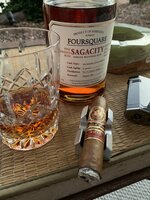 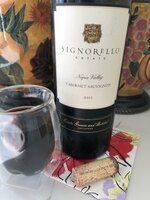 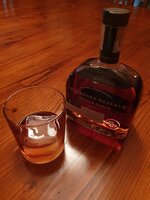