Reposting as this thread was accidentally deleted 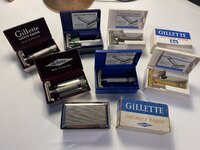 THE GILLETTE POPULAR was a unique line in the British Gillette 1930s model offering, made alongside a.o. the 1st generation Aristocrat. The Aristocrat and Popular models were quite alike, both being TTO open combs and having the same head. But the Populars have a distinguishably thinner handle than the Aristocrat, and on top they have that unique quirky feature where the blade doors do not open automatically when you twist the knob (as they do one any other Gillette TTO). Instead you have to twist the knob open but then manually flip the doors open either by turning the razor upside-down or by simply flipping the doors open with your fingers.

1938 and 1939 razor differences
The dead give-away difference between the 1938 and 1939 models is that the 1938 model has Rocket style handle knurling whereas the 1939 version has the gorgeous barberpole handle pattern also seen on the British Aristocrats.

The 8 set variations (I know of)
In total I have so far counted only 8 set variations. For each of the 1938 and 1939 years the razor came in 3 different set versions, as also shown in the two pictured advertisements (notice above how one advert depicts the 1938 model and the other the 1939 model).
On top, the 1939 nickel razor also came in a beautiful red leather Travelers Set, coined the #4 set. Today this is actually the very rarest of all, less than a handful of specimens are known to exist today.

The 1940 unicorn
The 8th, final, and to me most unique set variation came in 1940, according to mr-razor: A white bakelite case holding an only-once-seen razor with a bright nickel head and a black anodized nickel handle. A stunning model with that handle color which was only seen during the same era on some Rotbart models. This set is quite hard to track down today as it seeemingly was made only for the French market, with both case and razor engraved/embossed ‘Importé D’Angleterre’. As far as I understand, we don’t know today which # moniker this set was given.

So far, I have been able to land 7 of the 8 set options, only missing the #4 Traveler. And my 1939 gold plated razor is currently with Captain Murphy and Chris Evatt for a full refurbishment - as described in an earlier separate thread here on B&B.

Half of my sets I’ve found matched but as such matched sets are rarely offered I’ve had to also look out for set pieces to get to where I am. Like if I’ve spotted a Popular case with a mismatched razor I’ve been quick to collect it and keep it until I’ve fallen into the correct razor to match a set. The true hard-to-find items are those loose bakelite bladeholders which typically have been binned many years ago unless part of an unused set sitting at the bottom of a drawer.

I hope that the future holds for me to find the last oustanding set, so I can call my collection complete. Enjoy! 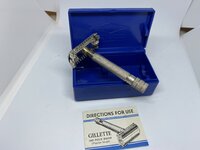 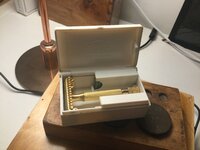 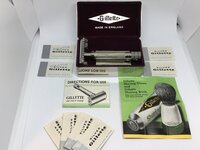 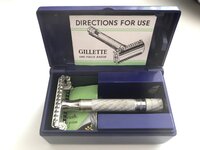 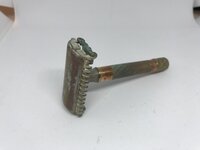 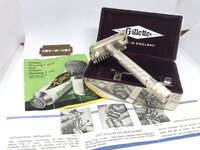 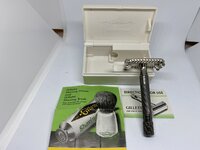 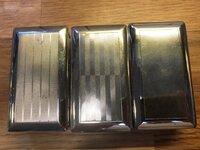 What a great collection of pristine examples of razors we rarely see. The condition of the silk is amazing. Well done.

Contributor
You sir, are my idol...

I aspire to be the North American version of Peter one day folks....

Wait a minute, you have that immaculate collection of British Aristocrats as well......Holy Smokes!

Gentlemen, your kind words are so warmly appreciated - it warms my heart and provides such comfort that others share my uncontrollable addiction

@JW - I am blushing here. And I can reassure you that you show all the signs of having been bitten by the bug

Peter, thanks for you work. Great thread!

I have a one-off that you don't have

Captain Murphy made one out of spare parts and then Chris finished it in beautiful nickel , both gentleman did a outstanding job. I use it at least once a week and it gives me a great Shave Everytime 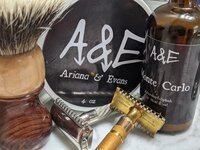 Thanks Achim and Steve!

That build-it-yourself looks awesome, Steve. Nickel is this very best hue for this (and most other) models!! And Cap is a magician

I call her my "FrankenPop" 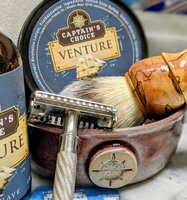 Moderator Emeritus
Thanks for posting this again, Peter ... very enlightening!

I now desperately need a gold and a blackhandle popular. Thanks.

Unexpectedly, the saga is now complete. I have been the recipient of the greatest of kindnesses as one of the major collectors has awarded me custody of his coveted #4 Traveller set. 1939 silver razor in a case almost unmarked by time and even with the original brush and soap still present. The soap smells remarkably nice considering it is 81 years old. I don’t think any of the content has ever been used more than once or twice... Kudos to Jake who generously has put sharing above owning. Thanks my friend. 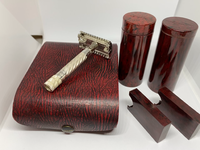 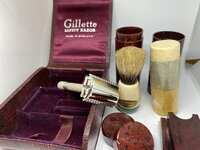 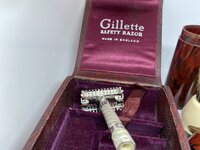 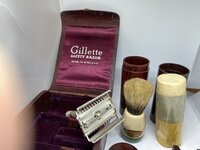 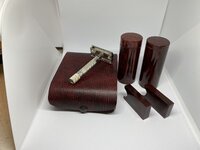 Great thread Peter, and what an awesome addiction to your collection.

Although I have only one popular and really like the looks and performance of the razors. 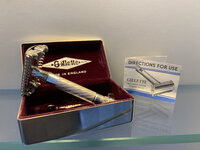