Saturday night shave as decreed by the randomness:

Shavette: Kai Kasho Woody loaded with a Kai blade on its 16th (!) shave
Clean-up: Subbed in my brand new Meta-4 (the random number called for my Stahly)

Two passes plus touch-up to a fantastic DFS-, no irritation, no weepers, no cuts. The Kai blade on its 16th shave was still amazingly smooth. I don't know how far one of these blades will go, because I have never used one other than 3-4 test shaves a while back. The Kai Kasho may be the smoothest shaving shavette on the planet.

This morning I had a great shave using Monday's spin. It brought up Mystic Waters Rosalimone soap, which hadn't come up in a while, and the fantastic brush I got from graydog (thanks!).

Again it brought up the Kai Kasho. This was the 17th shave with the same blade, and it finally began to show a few signs of dulling. I figure since I only shave 4 times a week, 17 shaves is a full month, so I feel like I really got my money's worth out of that blade. So I trashed the blade, and cleaned out the razor. It is open to air as we speak. I will load it up with a fresh Kai blade before the next shave.

Do we have a new croupier lined up? 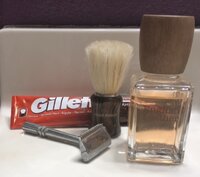 7097 brought together Gillette cream and a Gem razor. Odd bedfellows.
It also brought my long-forgotten boar brush (I only have one that I’ll ever actually use, and this is it) and a redux of English Leather.

The boar is stiff with soft tips and doesn’t hold much lather, but it got the job done. The Gem was in a good mood and gave me a flawless shave. Aftershave was completely painless. If the Gem gave me shaves this good every time, I’d never use anything else.

Ryanshh said:
Do we have a new croupier lined up?
Click to expand...

Not that I know of. Are you volunteering?

Not intending to oust @Ryanshh but i'd volunteer to take over the torch, starting today for the upcoming week... (if there is no other player to be next in the alphabetical order....)

@JAHE, its all yours.

I'm behind a few shaves. Ran the Monday spin last night. GFT Spanish Leather, Gillette PW Tech, Omega 48, and a nacet. The GFT is a sample and my first time using it. Strong powdery scent with excellent cushion. Really nice shave across the board.

While I was willing to run it when I asked, I am not sad to send it your way @JAHE. I just wanted to make sure we didn't have interruption.

That said, I have been using TOBS Avocado recently and the floral scent takes over when it is lathered and it is not a favorite of anyone at my house. It performs great and feels nice, but I feel like I have my head in a bouquet for at least an hour after using it. Great shaves otherwise!

Ryanshh said:
While I was willing to run it when I asked, I am not sad to send it your way @JAHE. I just wanted to make sure we didn't have interruption.

That said, I have been using TOBS Avocado recently and the floral scent takes over when it is lathered and it is not a favorite of anyone at my house. It performs great and feels nice, but I feel like I have my head in a bouquet for at least an hour after using it. Great shaves otherwise!
Click to expand...

To me, TOBS avocado smells like a freshly mown lawn. Everybody's sniffer is a bit different, to be sure.

Eben Stone said:
@JAHE, its all yours.
Click to expand...

Ryanshh said:
While I was willing to run it when I asked, I am not sad to send it your way @JAHE. I just wanted to make sure we didn't have interruption.
Click to expand...

My plan is to provide the spins in the evening (CET) prior to the day the shave shall take place, so that there is enough time for you to prepare the shave no matter where you are based.

kingfisher said:
To me, TOBS avocado smells like a freshly mown lawn. Everybody's sniffer is a bit different, to be sure.
Click to expand...

That is funny. When dry I get a lot more of a green, mowed grass scent. As soon as I start lathering it is like getting slapped in the face with flowers. Silly noses and brains.

I have decided to take part in the Fixed Four for March Madness using a slightly modified betting sheet based on the spin for March 1st. I am happy to serve as a croupier during the month. 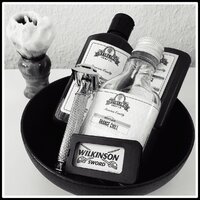 The shave with this blade 's been an indulgence. The level of comfort has been just day and night to yesterday's shave... Overall, a pleasant shave.

But I had to get up and go in to work early this morning so I decided to shave last night. My wife was wanting me to watch a show with her so she asked me to get my shave done as quickly as possible. At the last minute I decided to try a really quick shave, and my idea for that was as follows:

-Shaving cream, applied by hand rather than lathered by a brush
-Using an aggressive DE rather than my usual shavettes
-Possibly only going one pass plus a little touch-up if needed


So, I retired to the bathroom and applied some Italian shaving cream by hand. It was definitely slick, but obviously had very little cushion. Might have actually been really good for my usual shavette shave. Anyway, I grabbed my Yaqi Knight Helmet and loaded it with a fresh Gillette 7 o'clock black blade (most aggressive DE, brand-new blade, not much protection.....probably not the ideal set-up, lol).

Well, bottom line is that the razor was very efficient (one pass pretty much got me to CCS), with a TON of blade feel. I did skin stretching like I do with my shavette but I moved the razor much more quickly.

I ended up with one weeper and one little cut. The weeper was on my low neck near the Adam's apple. The cut was on my chin; not an impressive cut, more like a little nick. There were a couple of other areas that felt like I got a little too much dermabrasion done, but without visible signs.

Long story short, I did get the shave done very quickly, and the end result wasn't horrible (nothing anybody would notice), it wasn't at all like my usual smooth, comfortable shavette shaves.

Lesson learned, I guess. Don't mess with the random number! The random number knows best. Also, don't use arguably the most aggressive DE on planet earth with a fresh blade and a very, very thin lather. 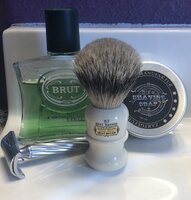 Ha, I need to update my sheet. All out of Erasmic. Had to grab a soap out of the drawer, and the Zartgefühl is what I found first. This was a gift from TSS when I bought the Simpsons 57. Speaking of, the 57 doesn’t like this soap. Switched to my Simpsons Trafalgar 2, which is also currently off the sheet and should make its way back one of these days. The combination made the typical thin slick lather that allowed the razor to glide nicely.

The FOCS has a GSB blade and did a good job, except for shaving off a skin bump that bled a bit. The Brut stung for a second. Not bad. 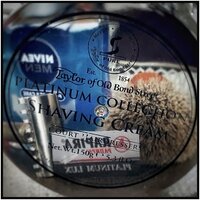 A nice, comfortable (despite its blades feel) and close shave (bbs). The Jaws mowed down my stubble with ease...
Last edited: Feb 26, 2021