I had a great shave this morning with the Friday spin.

The first two zeroes got me the Yaqi brush and my Club Cola soap. The third number gave me my Kai Kasho that I had finally loaded up with a fresh Kai blade.

The final zero is my free choice of any DE that isn't otherwise numbered. I got an idea that maybe I could tone down the Knight Helmet with a different top cap. As luck would have it, the iKon Shavecraft 101 was a perfect fit. So I loaded up the blade on the Knight Helmet baseplate and topped it off with the iKon cap. Visually, I could see that it bent the blade a little more, whuch led to less blade exposure. The gap was still enormous, but I am ok with that.

Final verdict is that the Frankenrazor was still very efficient and still has a fair bit of blade feel, but more like the Blackbird than like a poorly made DE shavette.

I only used the Frankenrazor for cleanup, and it worked fine. The Kai Kasho with the fresh Kai blade was smooth and comfortable. 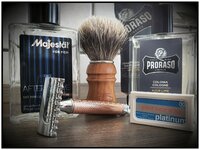 Another outstanding shave with the R41.
Love it! 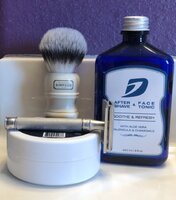 Man, I am relieved that you got a good combination.

That's been very brave of you to put the shaves of a whole month in my hands...

Wishing you a lot of fun with this combo!

JAHE said:
Man, I am relieved that you got a good combination.

That's been very brave of you to put the shaves of a whole month in my hands...

Wishing you a lot of fun with this combo!
Click to expand...

I am relieved for both of us! That said, before the spin, I looked at all of my options and if the thought of a month with that item made me miserable I swapped it for something I was excited or neutral towards. You did a great job! Way to push/click a button!

Yaqi brush, Dr. Jon's Savannah Sunrise soap (second time in a row!), the Mythus shavette (which I just loaded with a Fresh Feather ProGuard), and clean-up with the Meta-4 DE.

Two passes plus a tiny bit of jawline touch-up yielded a DFS.

Broke away from the roulette wheel last night to off my 2.5 month beard. The set up:

The perfect set up. Face is fairly sensitive since it’s been 2+ months without shaving. A nice two pass full shave gave me a DFS without any irritation, weepers, or nicks. Looking forward to getting back to the full three pass shaves.

I’m glad I waited until after work to shower and shave. 4000 was fun 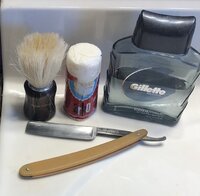 Razor is fresh off the hone and behaved much better than last time, despite having to fight through three days of wiry growth. Arko makes a great lather and Cool Wave is my aftershave.

Good one this morning with Wickham Club Cola and my Mythus shavette, loaded with a Feather ProGuard on only its second shave. Clean-up with the Meta-4, because ZERO is my free space for clean-up DE, and I am loving this razor since I got it a few weeks ago.

Unfortunately the spin also called for a straight razor shave and no time for that today. No time for English Leather again either. I used my Slim and Avon Deep Woods, the latter a unexpected surprise from the wife when she went thrifting one day last month. Very good shave today.

Excellent roll for Friday yielded the Wickham, my Mythus shavette, and the hybrid Tech for DE clean-up. Doesn't get much better than that.