The Knize said:
I have read that passage several times now, and I admit I do not think I fully grasp what it was that TS was saying. He seems to be praising Marvell, though!
Click to expand...

I read it through just once, and it kind of made my head hurt but yes, it would seem to indicate an appreciation for Marvell

I appreciate TS Eliot, but he's never struck me as the kind of poet I'd like to sit down and have a beer with, like I would with someone like say, EE Cummings, or Whitman, or Dylan Thomas or Oscar Wilde or Shakespeare.

JWCowboy said:
I read it through just once, and it kind of made my head hurt but yes, it would seem to indicate an appreciation for Marvell

I appreciate TS Eliot, but he's never struck me as the kind of poet I'd like to sit down and have a beer with, like I would with someone like say, EE Cummings, or Whitman, or Dylan Thomas or Oscar Wilde or Shakespeare.
Click to expand...

I once had cheeseburgers and a Budweiser with Seamus Heaney at Charley's Kitchen in Harvard Square.

JWCowboy said:
I read it through just once, and it kind of made my head hurt but yes, it would seem to indicate an appreciation for Marvell

I appreciate TS Eliot, but he's never struck me as the kind of poet I'd like to sit down and have a beer with, like I would with someone like say, EE Cummings, or Whitman, or Dylan Thomas or Oscar Wilde or Shakespeare.
Click to expand...

I think I have similar feelings about TS Elliot, except Prufrock has always seemed deep and profound to me. TS really showing some human understanding. TS might have been fun to talk to. I might well not have been able to keep up with him though.

All the others, yep, be amazing to chat with, except I think I would be utterly intimidated by Oscar Wilde's intellect and quick wit, afraid me might not like my attire, table manners, or repartee!

Contributor
Here's one to enjoy from William Wordsworth, born in England in 1770 on this day, April 7th.

I have thoughts that are fed by the sun:
The things which I see
Are welcome to me,
Welcome every one –
I do not wish to lie
Dead, dead,
Dead, without any company.
Here alone on my bed
With thoughts that are fed by the sun,
And hopes that are welcome every one,
Happy am I.
Oh life there is about thee
A deep delicious peace;
I would not be without thee,
Stay, oh stay!
Yet be thou ever as now –
Sweetness and breath, with the quiet of death –
Be but thou ever as now,
Peace, peace, peace.

A lovely poem for Easter week by Paul Simon's 'radical priest' from Me & Julio, the late Daniel Berrigan, SJ.

Moderator Emeritus
I had not realized Berrigan was the priest in Me and Julio and I had forgotten he was a poet. I sure remember him from back in the day. A visceral poem!

Berrigan was a buddy of a friend of mine called Ched.

Owen Bawn said:
I once had cheeseburgers and a Budweiser with Seamus Heaney at Charley's Kitchen in Harvard Square.
Click to expand... 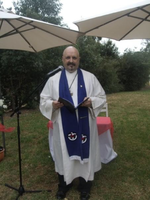 Back in the day. Did this for 37 years before I got sick and retired
Last edited: Today at 7:56 AM

I must go down to the sea again,
to the lonely sea and the sky;
I left my shoes and socks there -
I wonder if they're dry?

Contributor
So today, April 13th is the birthday of Irish Poet Seamus Heaney, born in 1939 in Castledawson. I feel like @Owen Bawn has posted one of his poems in this thread but I can't remember exactly. In any case here's another one:

Between my finger and my thumb
The squat pen rests; snug as a gun.

Under my window, a clean rasping sound
When the spade sinks into gravelly ground:
My father, digging. I look down

Till his straining rump among the flowerbeds
Bends low, comes up twenty years away
Stooping in rhythm through potato drills
Where he was digging.

The coarse boot nestled on the lug, the shaft
Against the inside knee was levered firmly.
He rooted out tall tops, buried the bright edge deep
To scatter new potatoes that we picked,
Loving their cool hardness in our hands.

By God, the old man could handle a spade.
Just like his old man.

My grandfather cut more turf in a day
Than any other man on Toner’s bog.
Once I carried him milk in a bottle
Corked sloppily with paper. He straightened up
To drink it, then fell to right away
Nicking and slicing neatly, heaving sods
Over his shoulder, going down and down
For the good turf. Digging.

The cold smell of potato mould, the squelch and slap
Of soggy peat, the curt cuts of an edge
Through living roots awaken in my head.
But I’ve no spade to follow men like them.

Between my finger and my thumb
The squat pen rests.
I’ll dig with it.

In 1986 I was studying at Harvard Divinity School but I couldn't afford a parking pass so I'd park on the street in a spot I knew and then walk along the Charles River and finally across the campus to the Divinity School. Seamus Heaney taught at Harvard each spring term for many years, and all through this term I would see him each day as he walked along the river and I was walking in the other direction to class. As we passed each other, I would avert my eyes, looking at the ground, and then I would reach up and tug my forelock. This was a traditional act of deference that Irish peasants did in the old days when passing a landlord, a priest, or a poet, the 3 classes of people the Irish poor naturally respected.

This went on for several weeks, each Monday, Wednesday, and Friday afternoons. We'd pass silently and I would tug my forelock, never saying a word or making eye contact. Till one day, as I reached for my forelock I felt two strong hands on my shoulders that halted my progress. I looked up, straight into the eyes of Heaney, whose face was less than a foot from mine. In his sing-song Ulster accent he asked "What're you on about, man?" I hesitated for a moment, and said "I'm trying to get you to write a poem about me." He thought for a second, threw his head back, and laughed heartily. We then spoke for a few minutes, and he invited me to his lecture that afternoon, one of the last he'd be giving that term. I went to the lecture, and to the one after that. That day when I had met him by the river he asked if I might like to get a pint after his final lecture. Of course I agreed. So that evening Heaney, a local Boston Irish American singer, actor, and Dostoevsky scholar and I went to Charlie's Kitchen in Harvard Square where we drank Budweiser and ate cheeseburgers.

I never got my poem.

Heaney was only 71 when he died, I believe. He had heart problems for a couple years, and had already once come close to dying. On the day that he died he had a massive coronary. He briefly regained consciousness before dying, and he asked the doctor or nurse attending him in Emergency if he could have his phone for a minute. They gave him his phone, and he sent a text message to his wife that said simply "Nolo timere," which is Latin for "Do not be afraid." In the Bible it is what angels always say when they meet men or women, who are understandably frightened by the arrival of an angel.

Nolo timere, he wrote. He pressed send, closed his eyes, and was gone. True story.

Lefonque said:
View attachment 1250803
Back in the day. Did this for 37 years before I got sick and retired
Click to expand...

I am surprised Dylan Thomas does not come up more often around here. That used to be one of my favorite poems, too. Then when my father was slowly dying I began to hate it. Sometimes it is better to go gently into that good night!

Owen Bawn said:
In 1986 I was studying at Harvard Divinity School
Click to expand...