Moderator Emeritus
I shaved with many Gillettes (non-vintage when I began) and waited until 2010 before trying a 34C Merkur. Actually, I tried slants long before the 34C model. But I think the chrome Merkur HD does very well and they all hold their own in terms of closeness, ease of use, and smoothness. It's a tough call which is "better" and one reason why I use many different razors to shave my face.

IMO my 89 with a bulldog shaves a bit better than my techs. Classic razors are like classic cars. Cool factor.

Let's throw in some history (I'm not a Merkur expert so I have to rely to common available source):

"Merkur was founded in 1896 by Emil Hermes who wished to become a safety razor manufacturer. His preferred company name (Hermes) was already taken, so he got clever and used the equivalent Roman messenger god, Mercury. This symbol of can still be seen on all of Merkur's packaging 124 years later!".

It has been said by the present owners who bought the company in 1996 that there were no records confirming when the 34c was launched but they did find some documentation that indicates the model 34 was designed in 1918.
I have read on German wet-shaving forums that the first 34 finally saw the light in 1931.

Surely the razor on the 1956 Merkur's catalog is nearly identical to the present model: 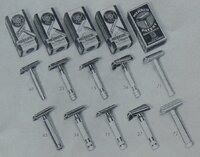 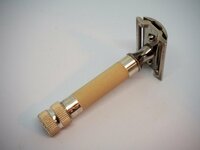 The Merkur 34 is a living dinosaur, a "vintage razor still made today" and, like many things from the past, it's hefty and built like a tank (ok, let's forget for a moment the modern zamak head

I only own a few Merkurs, the 15C, the 34C and the 37C and it is nice they all appear, almost unchanged, on that 64 years old catalog.

The 34c, Tech, and Superspeeds all give me very similar results, which is to say fairly comfortable but not super close shaves. There are some razors that will give me closer and more comfortable shaves. The Progress is one of them. Also the Futur. Merkur makes some great designs that far outshine Gillette (on shave quality at least) but for me the 34c doesn't.

I own both a 34c and numerous vintage Gillette razors (fatboy, slim, super speed, techs). I find the shaves quite good from both. I don't see one as superior to the other. But I will say the solid brass gillettes have it all over the modern merkur 34c in regards to durability.

glm38 said:
I own both a 34c and numerous vintage Gillette razors (fatboy, slim, super speed, techs). I find the shaves quite good from both. I don't see one as superior to the other. But I will say the solid brass gillettes have it all over the modern merkur 34c in regards to durability.
Click to expand...

Anyone who uses a modern 34C and tends to bump razors against sink fixtures or drop them on the floor will quickly see the accuracy of your last statement. But still, it's great that Merkur still makes these vintage designs today.

for Xmas this year, I am gifting my 20yr old Son a "proper" wet shave kit (we are long time can foam and cartridge wet shavers...)

The kit includes a vintage 1950s Tech, and a new 38C. (same head as the 34C, with longer, heavier barberpole handle)

I wonder which he will grow to prefer?
S

A vintage NOS Merkur 34 from my collection: 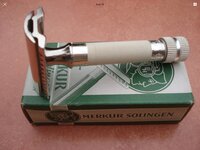 I have been using the merkur 47c head on a Parker semi slant handle for the past month or so, perfect balance and handle grip. Merkur straight bar heads certainly stand the test of time.
You must log in or register to reply here.
Share:
Facebook Twitter Reddit Pinterest Tumblr WhatsApp Email Link
Top Bottom