I was basically taking a bunch of pics yesterday, and figured I may as well take some of the "shave den." As a careful observer can tell: I obviously share this with my two little boys (note the Dora the Explorer cups by the near sink)

So - without further delay... WELCOME to my Shave Den! 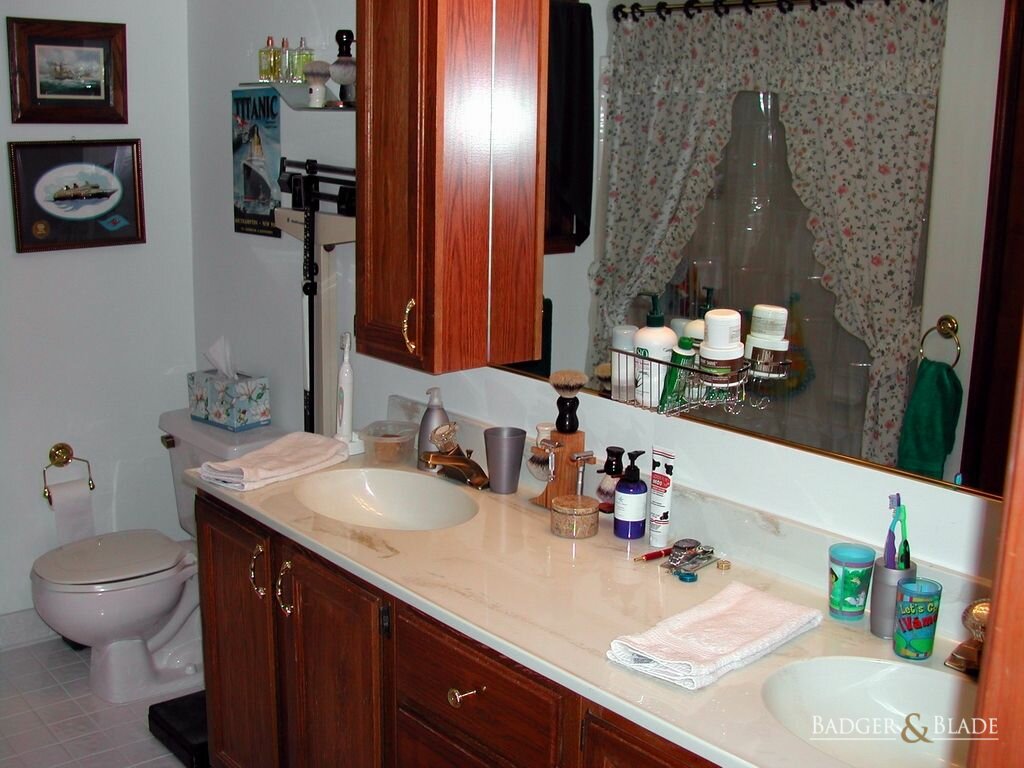 Here's a shot of "stuff" in my current rotation (you can still see the Norelco that I USED to use! 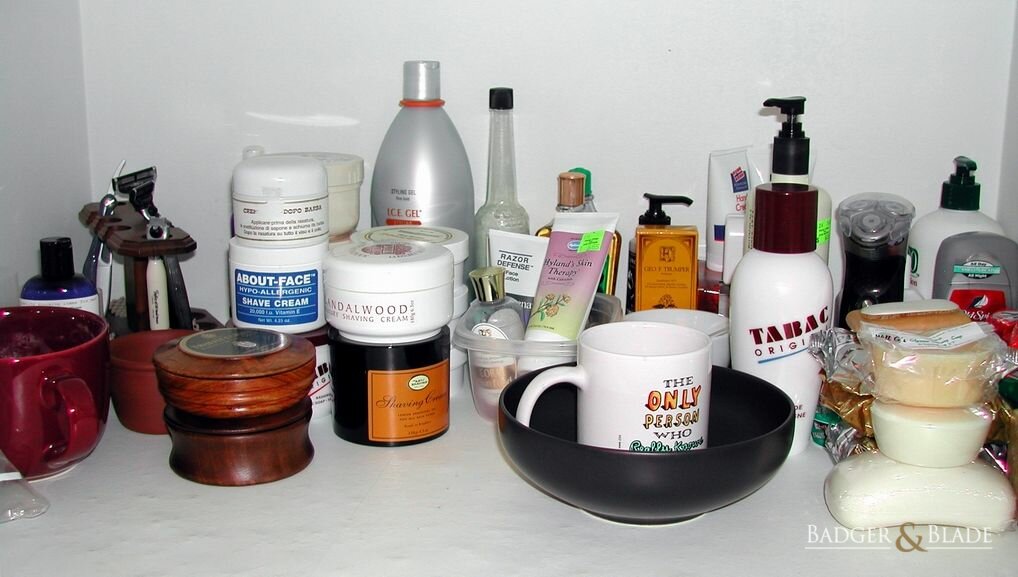 Here a closeup of the neat brush and razor stand made for my by "Divotmax." 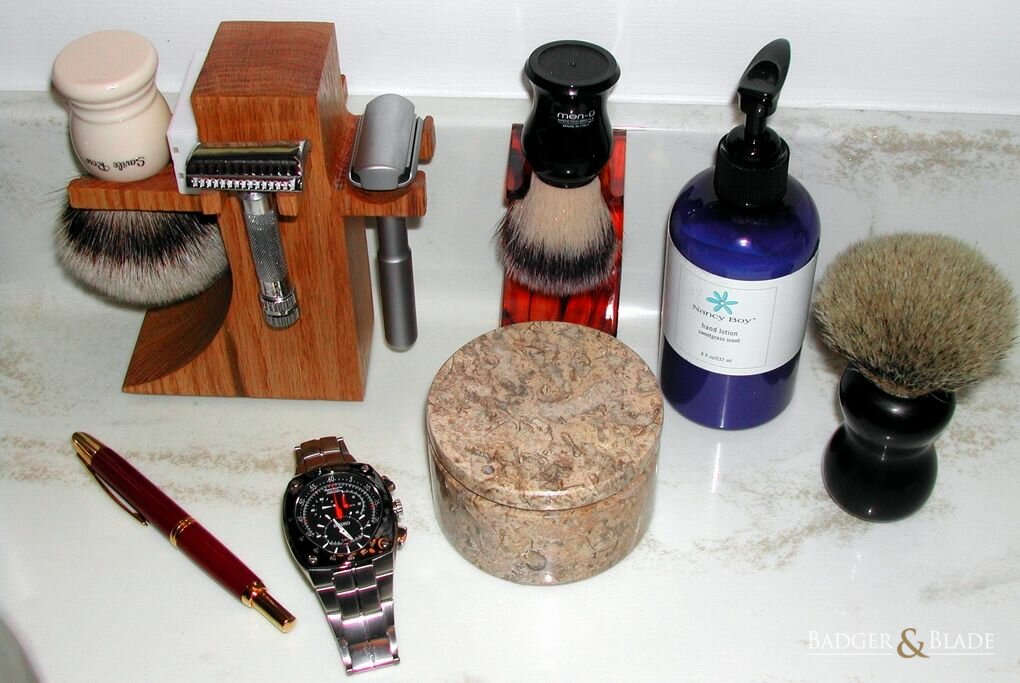 Here's a couple of shots of my cupboard with some items you all may recognize: 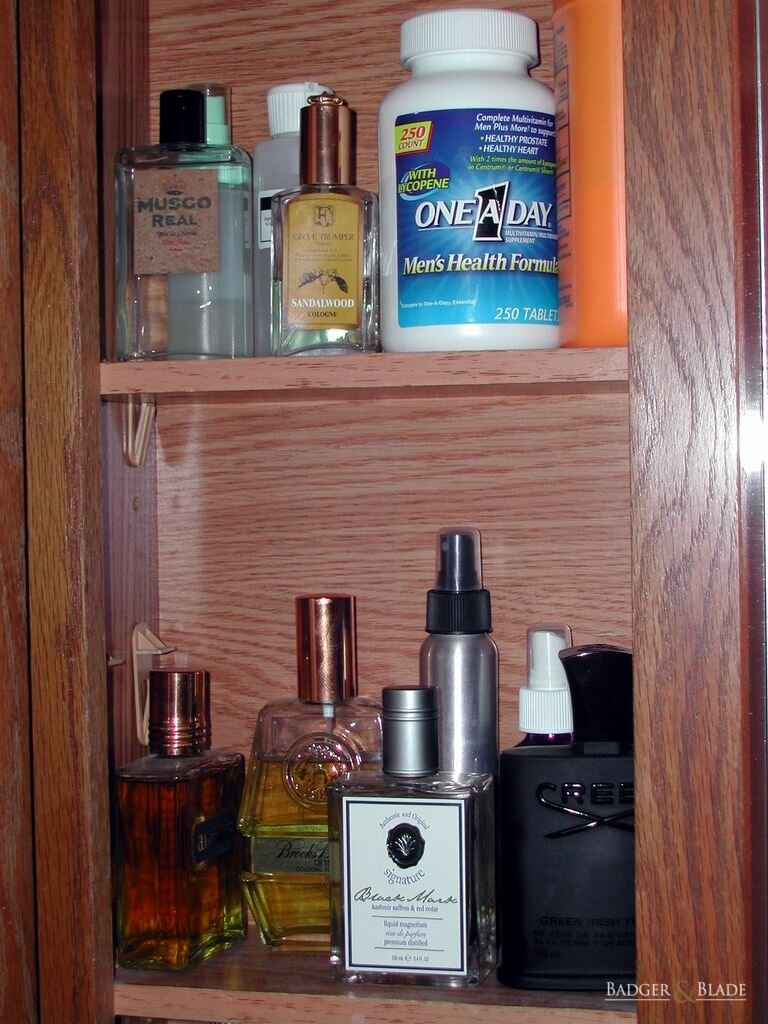 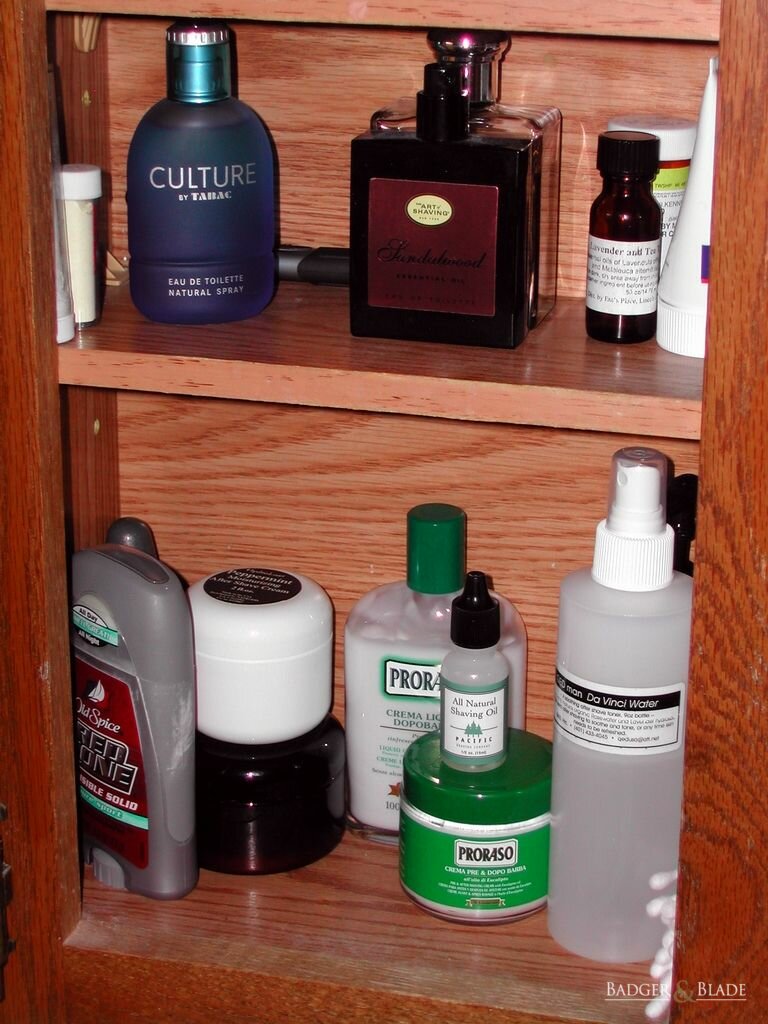 Last - a cool glass shelf I found at Linens & Things on clearance yesterday (we can ALWAYS put shelves to good use, can't we?): 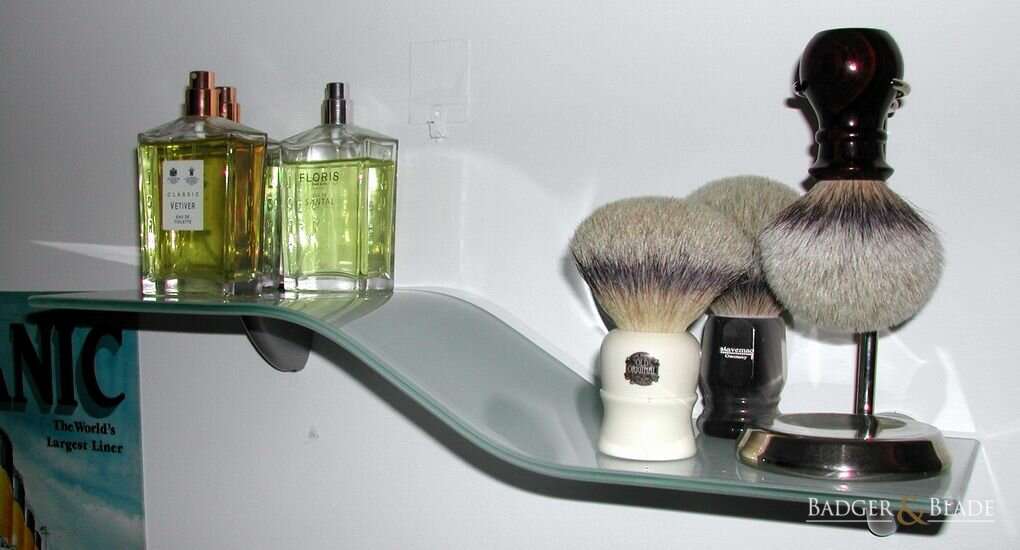 Nice pics Howard. I didn't see any Viagra in that medicine cabinet, unless that was it next to the Art of Shaving EDT. ha ha

My girls have Barbie toothbrushes and Barney toothpaste...ugh....glad they have their own bathroom though. I'll be even more glad in oh, say 7 to 10 years....

And what about creating a topic, such as the "Hall of Fame" for Shave Dens? Or even an area on the Hall of Fame for pics of our respective Shave Dens?

What do you think of that admins?

Howard- cool shelf. I love these sorts of postings as they inspire me how to re-org my limited space Apt. bathroom.

Nice pics Howard. I didn't see any Viagra in that medicine cabinet, unless that was it next to the Art of Shaving EDT. ha ha
Click to expand...

No need for Viagra... We never have sex anyway!

The prescription bottle is actually Allegra (for allergies).

Honestly - I don't really know why I posted these pics. But, there is always something fun about looking into other people's bathrooms, don't you agree?

We had an older shave den thread. Should we merge them? Here it is.

We had an older shave den thread. Should we merge them? Here it is.
Click to expand...

AACJ said:
And what about creating a topic, such as the "Hall of Fame" for Shave Dens? Or even an area on the Hall of Fame for pics of our respective Shave Dens?
Click to expand...

Create a HOME for them!!
C

Very cool. Nice, sophisticated, a great shave environment. What do you do for shave music?

Howard, can you give us a review of the CAR Shavemaster brush?

Very nice setup Howard. I really like the looks of that new shelf, and the Will G bowl.

We had an older shave den thread. Should we merge them? Here it is.
Click to expand...

I'll be damned if I didn't SEARCH my butt off for another thread (I KNEW there was one). The search told me "den" was a word that was not searchable (too small, or something) and of course, 'shave' or 'shaving' brought up every thread on the board. So, I just gave up and made a new one!

They can certainly be merged if everyone would prefer. I don't mind one bit.

I missed that Vanishing Point on the counter the first time! I guess I was too impressed by the brush/razor holder. Nice touch.

Austin said:
Howard, can you give us a review of the CAR Shavemaster brush?
Click to expand...

Yes I can. This brush belonged to Dick Danger originally. He never really "caught the bug" for Methodshaving; so he was using it mostly for creams. Since the brush is so dense, it uses a TON of cream - and he was going through it like mad (actually, I don't mind that one bit - more to buy LOL)

So, I had PM'ed him and asked him to keep me in mind if he ever chose to sell it. He did (and I did) and the rest is history.

Given the recent goings on with Joel's brush: I'm happy to report that I've got NOTHING but good things to say about this mutha'! Granted - I do Methodshave quite a bit (which this thing just kicks butt at). However, I am almost ashamed to admit that it is the finest brush in my collection (from a FUNCTIONALITY standpoint). I know it ain't the prettiest.

The bristles are soft (and really fine), but there's a TON of them in a really dense knot. So the bottom line is super softness but it totally stands up as you're scubbing your face with it.

I have (purposely) beat the crap out of this thing (drying it like a paintbrush, slapping it against a towel on a towel bar and mashing it while "working" the cube) and it has only lost 1 hair (just one) in a few weeks of doing this! That is less than any of my other brushes enduring the same treatment.

Now, I don't normally do this type of thing - but given when we know about Joel's example... I wanted to see what mine would do.

The initial review that Joel gave the prototype sums up my experience. It is a phenominal brush in all respects (other than not being super attractive). It ridiculously comfortable to hold. It's nicely weighted. It's the firmest, yet softest feeling brush I've yet used. It's a standout with soaps, creams (I don't care if I have to use more - I've got tons!!) and absolutely was conceived for Methodshaving.

Trust me, I know that there are some who think the whole Methodshaving/CAR product line and practice are crap-ola. That's why I've not said anything publicly about this brush until now. But I'm telling ya - it's simply amazing. I've tried a fair amount of "stuff" and it is truly purpose built (and I know that Dick Danger would agree with me on this). No matter what you think of that term (marketing hoopla, etc.) - please don't knock it until you've tried it.

Yes, it's a lot of money to spend on a brush! I totally agree. However, as fellow geeks/addicts/enthusiasts, whatever - we can always find ways to justify what we really want to buy. When the opportunity presented itself to get one second-hand, I jumped on it (and I'm glad I did).

Hopefully, Mr. Danger can chime in on this, too!

I missed that Vanishing Point on the counter the first time! I guess I was too impressed by the brush/razor holder. Nice touch.

He heh - just because I didn't post on the "fountain pens" thread doesn't mean I'm a TOTAL Cretin!

Very cool. Nice, sophisticated, a great shave environment. What do you do for shave music?

Believe it or not, Randy - NO shave music. I usually shave just after 5am so there's 3 people fast asleep in my house. The two little boys are on either side of my bathroom, so - silence is music to EVERYONE's ears!

I think it's neat to see into someone else's shaving world. When I tell people at work that I shave with straight razors, their reaction is usually:

But seeing another hobbyist's lair gives me that "I'm not alone" feeling.

And you sure do have a lot of shaving brushes, by the way. Those really puffy ones of yours --- where do you get them? I'm looking into getting a quality shaving brush, and I like the looks of those babies.

I'll take some pictures of my stuff soon, too.

Keep one hand on your wallet...

L
What are Your Favorite Parts of our Shaving Hobby?
2 3

Quirky things you do as part of your shave routine!
2