A simple question What's your answer and why? 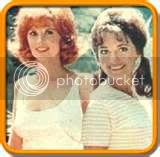 johnny dale said:
mary ann! She is still a babe even in her 60's.

If they weren't old enough to be my Grandmother's I'd probably go with Mary Anne.

What? No option for Eunice "Lovey" Wentworth-Howell?

Ok, back to the real question. Ginger seemed a bit high maintenance and melodramatic.

I like that good old down-home and Mary Anne.

FWIW- I just took a few minutes to go read all about the characters and the history of the show. Not quite as sordid The Brady Bunch, but pretty interested stuff about the characters and their casting and what-not. Turns out Ginger (Tina Louise) in real life, was pretty high maintenance, and "Lovey" reportedly left millions of dollars to Mary Anne after her death in 1990. Also, The Professor admitted that he never would have been able to make a radio out of coconuts in an actual ship wreck scenario.

When I used to watch the show: Ginger.

My college roommates answering machine was the exact title of this thread.

It was then and is still now Mary Ann.

Simply because she is hotter...and that farm girl outfit is just the right amount of kinky to make it past the censors.

Shipwrecked on a tropical island? The alpha male does not have to choose.

Mary Ann. Growing up it was always Mary Ann. But if Ginger had beckoned me to her boudoir, I would've come running.

I almost spit out my beer!

When you put it that way of course. Maybe both!

I had the same thought. However, I'll consider the niceties of western civilization. If I have to choose, I'll take Mary Anne.

Both, at the same time, in front of Mrs. Howell!!

Ginger. Holy hell she was sexy.

Gilligan was a dope. I would have been on that like white on rice. And as far as Mrs. Howell goes.......

Either. Both. Who am I to deny either?
T

professorchaos said:
Either. Both. Who am I to deny either?
Click to expand...

If your going there...dont stop at three, head on over to The Shady Rest in Hooterville (YES!) and meet up also with Betty Jo, Bobbie Jo and Billie Jo and have a real party!

P
Next aftershave, coming from Proraso