Contributor
My DS Cosmetic Z0 arrived today, so I had to compare it to my R41. It comes with various handles so I’ll just compare the heads.

The photos (below) show the Z0 on the left and the R41 on the right:

From the four photos above and the table of measurements below you can see that the Z0 blade has more blade reveal, lays flatter, and has larger blade exposure than the 2013 R41.
(For terminology explanation scroll down to see diagram on this WIKI LINK.)

Additionally, due to the skinny locating pins manual blade alignment may be required.
Considering all of the above, and loving a challenge, I decided to try it out… 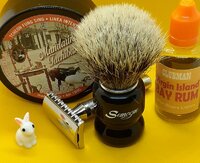 That was an interesting shave. I think I got off lightly with two tiny nicks on the point of my chin. I know well that the 2013 Mühle R41 has loose blade syndrome due to its large clamp distance, but I could easily tolerate it as a daily driver nonetheless. The Z0 exacerbates that problem due to its holding the blade nearly flat. I'm definitely a steep angle shaver, but I reckon 90° is just a tad OTT.

Toward the end of the shave I looked at the razor and couldn't believe what I was seeing. Waste whiskers and lather were crammed in between the cap and the blade, giving it a wicked little smile. After thoroughly rinsing the razor (which should have been easy due to the slick 'n' thin lather) there was still some waste trapped between the cap and the blade, so I took a pic:

My apologies for the lousy pic. Although it's hard to make out, the blade is actually running below that waste. When I first spotted it (before final rinsing), it was easily three times that thick, giving the blade a pronounced smile.

Shaving with The Coach (my "no guard" razor) is a piece of cake compared to this:

When they said VERY AGGRESSIVE, they obviously meant it.

Contributor
I value my face too much to even consider shaving with this razor. You are a braver man than I.

Thanks for the review. I hope they can sort out the issues and release a v2.

Thanks for the review my brave man...
I was considering it too during 11.11 but after the experience with Yaqi Slant and Knight Helmet...ahem ahem...

I do see where they did a mistake with Z0: The base plate is not following the geometry of the cap, the angle is slightly different between the cap and the base plate. Because of this the blade is not clamped as much as in R41. Z0 is only clamping close to the center, allowing a lot of flexing.

Thanks for the detailed review.
Ouch, that feels scary. I'll still try it when I'll receive it but might be the chance to get those derby extra out of the dust if I didnt piff them in a sale.

Thanks for the review @Cal. That was next on my list to get from DS Cosmetic. I will just pass on that one. As a previous poster hinted, it seems that whenever a Chinese manufacturer boast of an aggressive razor, they usually mean that it was designed to shut up folks on this side of the world that claim they love aggressive razors.

In all fairness, I selected their T7, which was the RR Mamba 70 clone with a scalloped cap, and that one turned out to be a great shaver. Adding a scalloped cap to an already smooth and efficient razor design only stepped things up a bit. Because of the not so perfect machining, the cap also fits well on the RR GC84 series giving those razors something extra.

These are two ‘bad boy’ razors: you are a brave man!

I'd rather pay $19 for the head of the original(from shaving dot ie) than pay for the copy.
D

DS have an opportunity to take a very good razor and improve it, but instead they decided to make a CNC clone and, so far, they are failing at both. Saying that, they clearly state it's not a final production model, being version 0.

The changes I'd like to see to the R41 are all related to blade support:
1) the top cap has the perfect length as it almost covers the blade. The problem here is that there is poor blade support (in my opinion), so I'd like to see a little more curve in the top cap so it's better supported by the teeth.
2) The teeth need different spacing so the outside teeth support the full length of the blade.
3) Or change the geometry of the of the baseplate so all the teeth support the blade equally.

1) and 2) can go together but 3) could probably avoid changes to top cap (1) it simply would be a flatter blade design.

I'm I the only one who thinks this way? I think even current R41 lovers could benefit from a bit more comfort during the shave.
Obviously I would like Muhle to tweak/update the design, but I can't see that happening anytime soon.

DarkSpy said:
Obviously I would like Muhle to tweak/update the design, but I can't see that happening anytime soon.
Click to expand...

Actually, there is some rumbling about a stainless R41. Something like it has been teased in the latest issue of their "30 Grad" magazine, however as I have not seen it, I can't confirm it. We'll have to wait and see.

How does the stainless Z0 compare to the Chinese R41 Clone? - Any chance you have one of those to add into the mix. I picked up one of the clone R41 (cast) a couple weeks back, and have to admit, it gives a really nice, close shave for the $5.00 spent on the bugger. A bit more blade feel than expected, but a great shave.

Thanks for the review, great pictures! I wonder if it is possible to modify Z0 so that it would clamp a blade better. One may file it somehow. If it's really made out of solid stainless steel - it would be easy to polish it back to perfect smoothness.

vates said:
I wonder if it is possible to modify Z0 so that it would clamp a blade better.
Click to expand...

I think the best way to achieve that would be a redesign of the cap, to bend the blade more and give it a little stiffness... rather than it just waving about in the wind.

I imagine DS Cosmetic will get it right eventually. I'm just a guinea pig with a slightly lighter back pocket.

Cal said:
I imagine DS Cosmetic will get it right eventually.
Click to expand...

Somehow I doubt it. Yes, I sound negative but someone serious would not release a razor like this.

With CNC they should have been able to create a better razor (as in tighter fit) than the original R41 because CNC should give better precision than first casting and then plating. There are floating on the net a few R41 3D models and I almost suspect they just downloaded one of these models without further thought. The fact that the pins are too narrow, that the blade clamping surfaces does not match between top cap and base plate and the overall impression tells me that no thought at all went into this one.

Cal said:
I'm just a guinea pig with a slightly lighter back pocket.

I think you're on point here. They've just saved a bit on development and testing, and allowed the overly enthusiastic pioneers to be their guinea pigs.
But I would say this is just bad quality and unacceptable business model.
My Z0 is about to arrive soon. I'm going to inspect it and if it has the same issues, I'm going to file a claim against DS.

engblom said:
Somehow I doubt it. Yes, I sound negative but someone serious would not release a razor like this.
Click to expand...

Well, they did warn me:

That aside, and digressing somewhat, I am always amazed at some product reviewers. On their PRODUCT PAGE, check out the reviews. I'm betting none of the reviewers has actually shaved with the Z0.

Well, there's a slight but definite difference between "not very perfect" and "underdeveloped, faulty product"

The things we do for science.